As usual, in the busyness and chaos of my life, I manage to hear snippets of the world's conversations all around me, and sometimes the Holy Spirit will "zing" me with a "Pay attention to this" summons.  Such was the case when I overhead a Fox News announcer commenting that the Department of Education is spending upwards of $2.5 million to bring a "mindfulness intervention" to kindergarteners in Chicago, where kids can go to “calm spots” in the corner to watch nature videos.
What the 10-second sound bite did not tell the audience was that this government program is in conjunction with the National Institutes of Health, which has spent over $100 million studying this New Age meditation technique called "mindfulness".  What's more, The Education Department has introduced this “Calm Classroom” program into 3,000 schools through its Investing in Innovation Fund.  What?!?!  Exactly what are all these "government programs" that taxpayer dollars are funding, and what exactly is it that they are trying to accomplish?? 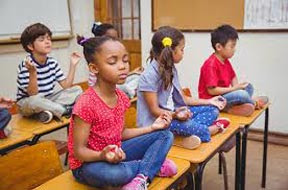 To begin with, Investing in Innovation Fund is "to promote student achievement and preparation for global competitiveness by fostering educational excellence and ensuring equal access."  And if you follow the rabbit trail, they propose that advancing student achievement can be accomplished through this theory based on "mindfulness intervention".  But what, precisely, is that?  According to the grant abstract, written to acquire funding, "Mindfulness is a secular, psychological mode involving non-judgmental focus on present-moment sensations, and has been shown to have a number of benefits to well-being.  Our project offers an innovative approach not only because mindfulness is unique relative to traditional social-emotional learning (SEL) programs, but also because of added elements designed to replenish children’s focus directly back into the content of school, including always-available ways to take very brief ‘brain breaks.' "  (Please pay attention to the words and phrases that I have underlined; you will see their significance shortly).
So, if kindergartners in Chicago are the focus group for this grant, just what is the government hoping to accomplish or prove?  According to the written grant, the Chicago Public School System, along with various Institutes and a trademarked program called Calm Classroom, hope to employ a mindfulness-based intervention to increase the self-regulation and engagement in learning of young children in low-performing schools.  Furthermore, the grant states, "The need for this approach arises from two conditions. First, mastery of self-regulation skills during the early years of schooling has been shown to be as, if not more important to long-term academic competence than intelligence or domain-specific knowledge. Second, increasingly younger children are experiencing high levels of trauma, unpredictability, and toxic stress, thus arriving at school with tendencies to either act out or disengage, rather than being ready to participate productively in the classroom community and learn."
That whole line about "increase self-regulation" says to me that they don't want any original thinkers, or kids who think outside the box, or who might challenge the teacher and other students with their uncontrolled imaginations.  What happened to the psychological motto of "not killing the child's spirit", that was so popular in the 60's?
Besides sounding like a bunch of New Age hocus-pocus, it seems very clear to me that the public school systems have lost control of their students, and now need to engage in some kind of "brain games" to mollify and reduce classroom disruption.  I don't know about you, but a trip to the principal's office in my grade school days, was enough to keep me from acting up.  I knew that at the end of that hall might be the Athletic Coach with a paddle.
But it's not enough to point out the lack of discipline in schools, or to lament the decidedly "secular", environmental, and mystical approach to maintaining classroom control.  You really need to know what is really behind this "mindfulness" movement.  Here it is:  The skill of mindfulness can be gradually developed using meditational practices that are described in detail in the Buddhist tradition. The Five-Aggregate Model, an ancient model of the mind and body, is a helpful theoretical resource that could guide mindfulness interventions.  The term "mindfulness" is derived from the Pali-term sati, which is an essential element of Buddhist practice, including vipassana, satipaṭṭhāna and anapanasati. It has been popularized in the West by Jon Kabat-Zinn with his mindfulness-based stress reduction (MBSR) program. 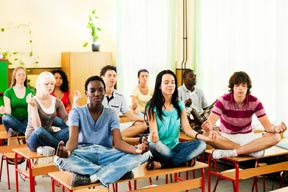 Now, here is where it gets frightening for me.... Did you know that in 2012,  Congressman Tim Ryan of Ohio published A Mindful Nation, and has received a $1 million federal grant to teach mindfulness in schools in his home district?  Or, in 2000, The Inner Kids Program, a mindfulness-based program developed for children, was introduced into public and private school curricula in the greater Los Angeles area?  Or how about the fact that The Holistic Life Foundation, a non-profit organization that created an in-school mindfulness program called Mindful Moment, is currently serving almost 350 students daily at Robert W. Coleman Elementary School and approximately 1300 students at Patterson Park High School in Baltimore, Maryland? At Patterson High School, the Mindful Moment program engages the school's faculty along with the students during a 15-minute mindfulness practice at the beginning and end of each school day.  They are allowed to practice an element of Buddhist meditation, but a prayer to the One True God of the Universe is illegal?
And just to top off the widespread use of the Mindfulness Movement, consider this: One study involved enrolling college students in a course about mindfulness that included guided mindfulness meditation as part of the curriculum. After the semester, pre- and post-levels for different aspects of mental health were compared and students were found to have more non-judgmental stances towards their thoughts and feelings. This is believed to result in better stress-coping skills, improved academic performance and quality of life.  Furthermore, scores continued to improve for the weeks following the end of the course, demonstrating the long-lasting effects of mindfulness meditation.
Do you see what I'm trying to show you?  For years now, our public schools and universities have been preparing our kids to become robots!  Let's not teach them critical thinking skills!  No!  Let's teach them all to hum a mantra and dull their minds so they are easily contained and mastered.  And it is now instituted from kindergarten to college!  If you really want to see the full scope of what I believe is a harmful movement to capture and control the minds of our kids, read the Wikipedia entry. I know not everyone thinks Wikipedia falls under the banner of incontrovertible truth, but if even a fraction of what they report is true, it should frighten all parents.  Don't be fooled by the claims that  "calm spots" and "brain breaks" are needed elements to help your kids learn better.  Just teach them Readin', Writin', and Arithmetic, and how to think for themselves!

Go to the article at The Free Beacon website for more information on what the Department of Education has in store for your kids.

2 Corinthians 11:3    "But I am afraid that as the serpent deceived Eve by his cunning, your thoughts will be led astray from a sincere and pure devotion to Christ."