‘Vengeance is Mine, and retribution,
In due time their foot will slip;
For the day of their disaster is at hand,
And their doom hurries to meet them.’ 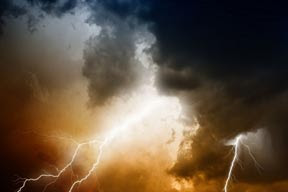 The world is still reeling from the horror of the Parisian terror attacks.  We Christians join the inhabitants of earth as we mourn the overt display of Evil that occurred two evenings ago; even as we struggle with what our response should be.  We look to Scripture for comfort and understanding, and one message comes through loud and clear… our God is a God of Justice, and He will repay those who choose to align themselves with the Enemy.
As today's verse instructs us, we see that God proclaims that Vengeance is His.  We are not to take that task and burden upon ourselves.  In other words, He will avenge the injured and the innocent; He will bring a full and complete punishment upon those who dare to follow Satan so boldly.
Their idolatry of a false god, and their rebellion against the One True God will be rooted out and exposed for what it is.  I like what Matthew Henry has to say on this subject:  "The Lord will never disgrace the throne of his glory by allowing this transgression to go unanswered.  But notice that the retribution will happen "in due time"; when they least expect it.  When sinners deem themselves most secure, they will suddenly fall into destruction.  That is when "their foot will slip."
And in case the minions of Satan think they will escape God's payback, they need to understand that His hatred of sin, His strict justice, and His faithfulness to His threatenings as well as His promises, demands that He carry out His vengeance… in His timing and in His way.
They need to remember God's vengeance against Sodom and Gomorrah, and against Edom, and even against His chosen people, Israel, when they rebelled against Him.  The one thing He always made sure of… that they would know that He was Lord!  Nothing has changed.  The enemies of God may think that their reign is ascending, and that the kingdom of the beast is perpetuating his darkness and confusion, but the Lord has declared that "the day of their disaster is at hand, and their doom hurries to meet them."
We must not forget that there are other Saints who also have been slain by those influenced by the AntiChrist spirit, and they are crying out from beneath God's altar; they are the souls of those who have been slain because of the word of God and the testimony they maintained.  There are new Saints being added to that number each day, as Christians across the Middle East give up their lives, rather than deny their Savior.
Once again, we should consider the words of Matthew Henry:  "They commit their cause to Him to whom vengeance belongs. The Lord is the comforter of his afflicted servants, and precious is their blood in his sight. As the measure of the sin of persecutors is filling up, so is the number of the persecuted, martyred servants of Christ. When this is fulfilled, God will send tribulation to those who trouble them, and unbroken happiness and rest to those that are troubled."
It is not for us to understand how or when God will exact His vengeance.  It is enough to know that there will be a reckoning one day soon... and those who have been deceived by Satan will receive their due.  Lord, have mercy on all those who loved you unto death.
Posted by Pam Kohler at 7:00 AM