Please, Father ... Help Us To Understand!

It's still too early to make any kind of sense of the terror attacks in Paris, France, other than to say that with each new hour, the news is more devastating.   At this moment in time, all I want to do is plead for God's mercy on His people... and to pray.

How it must grieve You to see how Man, made in Your image, can be so cruel and evil to each other.  In these first hours after the horrendous attacks upon the innocent people of France, my heart is shattered in pain, imagining the fear and the panic that must have been a part of all those people's last minutes on earth.
Father, I pray that each one of those people had a personal encounter with Jesus before they breathed their last.  I know that is illogical and unreasonable to expect, but it just makes me realize how quickly lost are the chances of those who don't know Him ... and how much bigger will that burden of pain be for their families. 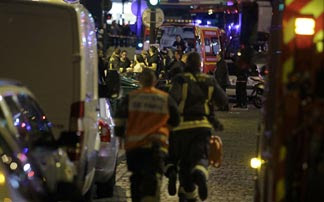 And, Father, I have to be honest.  I admit that I don't know if I can ask forgiveness for those who perpetrated this evil.  Your Word says "they know not what they do".  I know they have been so blinded by hate, which does not come from You.  And I believe that their souls are full of demons.  How else can you explain the atrocities they committed against another human being; a person they did not even know?  And I am aware that our Enemy roams the earth, seeking whomever he can devour.  And it sure feels like he has consumed every ounce of You that might have remained in the monsters that robbed Paris of their peace last night.   But I know I must forgive, so I have to ask the Holy Spirit for the power to be able to do that, because I am unable to do so on my own.
Most of all, I know my words sound weak in asking for comfort for those people left behind -- for the family members who are in shock and pain; for those who witnessed the carnage and survived; for those first responders who could not have been prepared for what they saw; and for law enforcement and the nation's leaders, who have to wonder if there was more that could have been done.  But, Father, I know that only You and Your Spirit can commune with our spirits; no human words or actions can heal the wounds and the damage done to our inner being.
We were not made to experience such pain; that wasn't Your plan for us.  But from the first moment that Man listened to the lies of Satan, we have had to pay the consequences for our disobedience.  And the acceleration of lies, sin, and Evil that Your Word has prophesied was on display last night.  And, if there is one thing we know for sure, Father... it is not over.
My spirit discerns the Apostle Paul's message to us in Ephesians 6, and that Satan has appointed a dark ruler to preside over France.  And I know assignments have been given to those who have pledged their allegiance to the Enemy's false promise of conquest.  So, Father, I intercede in prayer on behalf of all those who belong to You, and on behalf of those who still have a chance to know You... I ask you to send Your army of Heavenly Angels to battle against these rulers, against the powers, and against the world forces of this darkness -- both on this earth and in the spiritual realm.  I pray this in the Name of Jesus, knowing that it has supernatural power to effect the future.
Because we are not intimidated; nor are we conceding defeat.  Because we believe in Your Sovereignty and Your Justice, Hope is what will soothe our pain and heal these ghastly wounds.  Jesus is our balm and our Physician, as well as the Sword of Your Vengeance.  While suffering the pain of those lost to Him, He will remain steadfastly in our presence and we will overcome this Evil.  Father, I pray that His tears will touch the heart of every person across the globe, and our spirits will unite in recognition of Your love for us and what Jesus's blood, shed on the Cross, has accomplished for each person who seeks to know Him.
Father, accept these humble words on behalf of all those who love You.  We ask for the power of the Holy Spirit to help us forgive, and we thank You for the gift of Your Son, that we might know how to love each other... Father God, help us to love each other!  Amen.