How Do We Reconcile the World's Struggle With Refugees and Migrants? 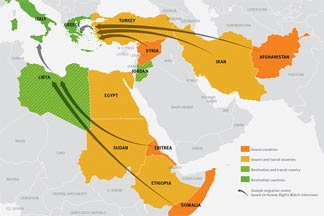 The nations of the world are grappling with the "problem" of refugees emigrating from the dangers of the expanding Caliphate in the Middle East.  Leaders like German Chancellor Angela Merkel maintains that no limits should be placed on the number of people allowed to enter her country; that European values of humanity and compassion in the face of terror need to be upheld.
But the newly-elected government of Poland has announced their country won't accept migrant quotas imposed by the European Union.  And Dutch anti-immigration politician Geert Wilders says, "The only way to deal with it (the refugee crisis) is to regain our national sovereignty and close our national borders... We close our borders to migrants, not refugees."
So, what does that mean?  What is the difference?  Actually, as The New York Times points out, there is a legal difference.    Briefly, a refugee is person who has fled his or her country to escape war or persecution, and can prove it.  More specifically, The 1951 Refugee Convention, negotiated after World War II, defines a refugee as a person who, “owing to a well-founded fear of being persecuted for reasons of race, religion, nationality, membership of a particular social group or political opinion, is outside the country of his nationality, and is unable to, or owing to such fear, is unwilling to avail himself of the protection of that country.”
On the other hand, anyone moving from one country to another is considered a migrant unless he or she is specifically fleeing war or persecution. Migrants may be fleeing dire poverty, or may be well-off and merely seeking better opportunities, or may be migrating to join relatives who have gone before them.  So, in the face of the crisis in the Middle East and the onslaught of Isis's atrocities, you can imagine the political and social implications of these distinctions -- and the ensuing confusion.
Under the 1951 convention, countries are free to deport migrants who arrive without legal papers, which they cannot do with refugees.  But complicating the immigration of refugees is what is known as "the Schengen policy".  Again, according to The New York Times, this is an agreement to abolish border controls among the European nations that have joined. For the most part, people in any Schengen country can travel freely to any other without stopping to show a passport or visa, just as travelers can between American states or Canadian provinces. Only when entering from outside the Schengen area are a traveler’s credentials regularly checked.
So, once an emigrant from the Middle East arrives in Greece, and is registered, he is pretty much free to travel throughout Europe under this policy.  So can you see, in the wake of the Paris terror attack, just how significant it is that Greece is swamped with those seeking admittance into Europe.  In fact, the latest United Nations estimates show over 800,000 migrants have passed through the Mediterranean on their way to Europe this year, with 660,700 landing in Greece and 142,400 in Italy. Based on these numbers, it is not surprising that the Greek minister for Citizen Protection, Nikos Tosca, has announced that one of the Paris terrorists with a Syrian passport was "masquerading as a refugee".  And it just as understandable that leaders in countries like Hungary and Austria and Poland feel that the Greeks are not doing their job properly in securing Europe’s borders, but simply processing all that come, and sending them on into Europe.
So don't you think that as a nation, the US should be very careful how we handle this thorny and dangerous issue of Middle Eastern refugees?  And do you see just how difficult a situation this is?  Naturally, the Middle Eastern Christians, who are being brutally persecuted for their religious beliefs come to mind when considering who should be allowed to enter our country.  But what exactly is the vetting process for all others?  If, as the news agency Reuters reports, our government is moving to increase and accelerate the number of Syrian refugees who might be admitted into the United States by opening new screening outposts in Iraq and Lebanon... shouldn't this be a major concern and raise some red flags?  In the wake of Paris, doesn't this qualify as a national security issue?
As always, I try to see any situation from my Biblical worldview, and the Bible clearly tells us that, as Christians, we are to accept aliens into our land and help them to conform to our laws and our traditions.  In fact, the law of the Old Testament was that aliens were to be treated with respect and given aid. If things were so desperate in their home land that people would rather move to Israel and live under Israel's strict judicial and ceremonial law, the Israelites were to honor that desire.
However, this does not apply to those aliens who enter a country for the purpose of crime or violence. The caveat God gave the Israelites regarding aliens is that they needed to obey the laws of the land (Leviticus 24:22), and the Israelites needed to make it possible for them to obey the laws of the land by giving them opportunities for sustenance (Leviticus 23:22). Aliens who came in to steal, fight, or draw the Israelites to other gods were to be disposed of quickly.
You see, these same laws should be applied and followed today.  Careful investigation and evaluation is absolutely necessary!  But we can all recognize that the world is in crisis, and the sheer mayhem and chaos created by Isis and the schemes of Satan threaten to overwhelm our human abilities.  So, it is in humility and meekness that I approach God, asking Him to show us the way through His righteous and loving nature.  Let us welcome and give aid to those who truly desire it, and repel the wicked plots of our enemies who wish to destroy us.

Nahum 1:7    "The LORD is good, A stronghold in the day of trouble, And He knows those who take refuge in Him."