The Constitution and Sharia Law

Over the past week, much has made in the media about comments by GOP Presidential candidate Dr. Ben Carson concerning a Muslim running for President of the United States.  So that we are clear on exactly what he said, I would like to reprint the exchange between Carson and Meet The Press host, Chuck Todd... 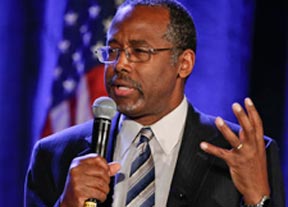 TODD: Let me wrap this up by finally dealing with what's been going on [with] Donald Trump, and a deal with a questioner that claimed that the president was Muslim. Let me ask you the question this way: Should a president's faith matter? Should your faith matter to voters?

CHUCK TODD: So do you believe that Islam is consistent with the Constitution?

CHUCK TODD: So you--

DR. BEN CARSON: I would not advocate that we put a Muslim in charge of this nation. I absolutely would not agree with that.

Now, I'm sure if Dr. Carson could have that moment back, he would have elaborated on his answer, or explained it in more depth, as he has attempted to do in ensuing interviews.  As he has spelled out in the last few days, he would have no problem with a Muslim President, as long as the candidate denounces Sharia law.  And, I for one, believe that is what he meant by a potential candidate's faith being consistent with the values and principles of America.
But that is precisely why he is still under fire ... and I have to agree with him.  From everything I have read about Sharia Law, it is not compatible with the fundamental principles of ruling our behavior in this country -- let alone being in harmony with the Constitution.  And I think that a lot of the backlash Dr. Carson has suffered is because either the Elite and the Media don't comprehend the consequences of Sharia Law in this nation -- or they understand it quite well, but are adhering to the same old tolerant, politically correct playbook.  Either way, I fear that they are misguided.
But you don't have to take my word for it.  You can read the words of Dr. Tawfik Hamid, a Doctor of Internal Medicine with a master's degree in cognitive psychology and educational techniques.  According to his own biography, Hamid was a member of a radical Islamic organization, Jamaa Islameia JI (of Egypt), with Dr. Ayman Al-Zawaherri, who later became the second in command of Al-Qaeda. After being radicalized in the JI (approximately thirty-five years ago), he had an awakening of his human conscience, recognized the threat of Radical Islam, and started to teach modern peaceful interpretations of classical Islamic core texts.
Make no mistake, Hamid is still a Muslim, but he wrote this in an article regarding Dr. Ben Carson's warning about Sharia Law:  “I can state unequivocally that Dr. Carson is correct. Without a single exception, the approved Islamic literature teaches violent principles such as killing apostates, beating women, killing gays, and enslaving female war prisoners for sexual purposes.” 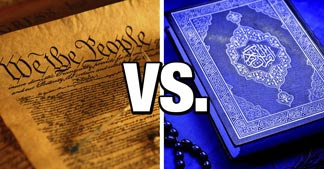 So does Sharia Law look like, sound like, or resemble the Constitution in any form or matter?  I think not.  Our Constitution was written with specific goals in mind:  to form a more perfect union of the peoples of this nation; to establish justice for all;  to ensure domestic tranquility; to provide for the common defense; to promote the general welfare; and to secure the blessings of liberty to ourselves and future generations.
From all I can ascertain, Islamic (Shariah) Law was made to protect five things: (religion, self, mind, offspring, and property), which the Koran says are the main rights of humans in this life.  But it  is the "violent principles" of Sharia Law that Dr. Hamid says are taught in order to protect these rights that are not only "necessary rules of the religion" [of Islam], but "fly in the face of the Constitution".
And besides considering both Hamid and Dr. Carson's comments, one must examine the facts in a  World Net Daily article:  There are now an estimated 3 million Muslims residing in the United States as citizens or with permanent legal status, and more than 250,000 new Muslim residents enter the U.S. per year as refugees, on work visas and student-based visas, according to the Center for Immigration Studies. (And that doesn't include the recent push for additional Middle Eastern refugees urged by the President and the UN).
The WND article also included a May 2015 poll by The Center For Security Policy that revealed the following:  a majority (51%) agreed that “Muslims in America should have the choice of being governed according to shariah.”  When that question was put to the broader U.S. population, the overwhelming majority held that shariah should not displace the U.S. Constitution (86% to 2%).
In addition, the article showed that more than half (51%) of U.S. Muslims polled also believe either that they should have the choice of American or shariah courts, or that they should have their own tribunals to apply shariah. Only 39% of those polled said that Muslims in the U.S. should be subject to American courts.  Even more troubling, is the fact that nearly a quarter of the Muslims polled believed that, “It is legitimate to use violence to punish those who give offense to Islam by, for example, portraying the prophet Mohammed.”
So, why all the outrage and condemnation over Dr. Carson's comments?  You may not agree with him, or like his non-political and honest answer.  But can anyone legitimately say that there is no foundation for his concerns?  Where are the ardent feminists and those who celebrate the Supreme Court's recent ruling on gay marriage -- especially, when sharia law in Yemen, Saudia Arabia, Nigeria, the United Arab Emirates, Somalia, Iraq and Iran approve the death penalty for homosexuals, and women are subjugated citizens? Do they really think they will get an "Americanized" version of Sharia Law in this country?
And why aren't those who always scream about "separation of Church and State" agreeing with Dr. Carson?  If they are being intellectually honest, it seems to me they must admit that Sharia Law would be a far more oppressive influence on our culture and society than Christianity.  Would these folks protest the restrictions that Sharia Law wants to impose on our society as much as they object to a nativity scene on the public square?
During a Fox News video poll regarding the Constitution and Sharia Law, the most common answer given by American Muslims was the following:  “The Sharia law is made by God — by Allah; the Constitution was made by people.”  In case you don't get the implications of that statement, I believe those that wish Sharia Law to be above our Constitution would like to see it not only supersede our founding document, but replace it.
Now, I happen to believe that our founding documents were greatly influenced by Christian-Judeo beliefs and principles, and Sharia Law is in direct conflict with the freedoms of both my faith and my country’s governing laws.  Apparently Dr. Ben Carson feels the same way, and it is refreshing and crucial that men like him have the courage to stand up and defend Christianity and the Constitution.
All we have to do is look at Europe to see what the metamorphosis of our nation might look like.  Now is not the time for political correctness and compromise.  I say, "Bravo" to Dr. Carson for single-handedly standing for the uniqueness and sovereignty of our nation.  May God continue to give him the courage to be bold and speak the truth!

1 Timothy 2:16   "Live as people who are free, not using your freedom as a cover-up for evil, but living as servants of God."