The Millennial Generation: Is Their Narcissism Good For the Workplace?

Today's blog post was generated after watching "CBS Sunday Morning" this week, and a segment on the Millennial generation.  I guess I'm no different than my parents before me, or their parents before them ... but I find myself asking "What's going on with this generation of kids"?

Every generation must face the fears about their future.  A common concern is the question, "What is the state of the U.S. economy, and will I be able to establish a firm foundation for the rest of my life?"  None have been more apprehensive than what we call "The Millennial Generation".  Of course, the natural tendency for us older Americans is to compare this generation with our own.
My parent's generation was "The Greatest Generation", which gave birth to my generation, "The Baby-Boomers".  The offspring of my generation is called "The Millennials," because they will come of age during the new millennium.
Born between the years of 1981 and 2000, they now constitute 75,000,000 in numbers, and one out of every three workers in the U.S.  So how is this generation affecting the American workplace?  I think you will get a clear picture when I give you this quote from Jean Twenge, a professor of psychology at San Diego State University:  "We know from looking at narcissism scores among college students from the 1980s to recent surveys, this generation does score higher on narcissism... from 1 out of 8, [it has grown] to 1 out of 3." 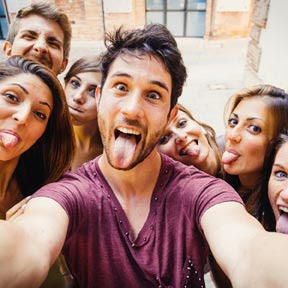 That should concern us because the definition of narcissism is self-love, self-admiration, self-absorption, self-obsession, conceit, self-centeredness, self-regard, egotism, egoism.  Let's just say modesty is not a part of their vocabulary.  In fact, after decades of studying self-assessments by millions of the Millennialists in which they reported how accomplished, how motivated, and how special they consider themselves, Professor Twenge wrote a book on them entitled, Generation Me.
That seems to say it all, doesn't it?  Furthermore, one of her research papers reveals that "Millennials in the workplace are defined by... the combination of not wanting to work hard, but still wanting more money and status...".  As Twenge explains, this latest generation is seeing and facing a more competitive and challenging job market than previous generations.  The problem is they haven't been prepared, perhaps because they received so much praise growing up and they got a trophy just for showing up at sporting events.  As Twenge accurately comments, "Unfortunately, the workplace doesn't work that way.  You have to do so much more than just show up."
The scary thing is that the question now becomes, "Are they going to adapt to the workforce, or is the workforce going to adapt to them?"  Professor Twenge says the answer to that question will shape the future of the U.S. economy.  And sadly, I'm afraid that the forecast for our future may not be as bright as it should be.
Mind you, I am not seeking to condemn all Millennials, but from what I have seen, far too many of them have an "entitlement" attitude.  If the work gets a little too hard, or they get bored, or it just isn't something they "want" to do ... they quit.  Or I have also seen that they will do the job assigned to them, but no more or no less -- and then they want a raise and a promotion.  One member of the Millennial generation was at least honest in her assessment of her peer group:  "The need for praise is absolute.  That is a big issue in our generation.  We don't particularly respond well to criticism, and we absolutely want praise immediately."  Do the words spoiled, overindulged, and bratty come to mind?
Yet her honesty was also right on target when she said that the explosion of internet technology had done her generation no favors.  "The internet culture is part of the problem... you put a picture up on Facebook, you want to be in double, triple "Likes" within the hour.  If you put a picture up on Facebook, and no one likes it, you feel as though you failed.  This instant-gratification cycle that we've gotten into has developed into a bit of a problem in the workforce."  But she also credits a certain amount of "delusional narcissism" as necessary if you want to be a successful and creative entrepreneur.
While I will admit that confidence in yourself is a great trait in the workplace, what happened to those workers who are willing to be the first one on the job, and the last one to go home?  Those who do more than is asked of them? Or those who are grateful to have a job, instead of always expecting more to be handed to them, or to be accommodated and catered to?
I especially find it interesting that of those Millennial workers that seemed super-motivated during the CBS program, they all seemed to be children of immigrants.  The workers of Asian or Middle Eastern ethnicity had a different attitude about them; as though they thrived on the competition and challenges of proving themselves --- instead of workers who are multi-generational Americans and are the products of easier, more comfortable, and less demanding life-styles.
In the end, what does this mean for the American workplace and the future of the U.S. economy?  Does our DNA still contain the elements of motivation, single-handed determination, and the drive to succeed?  Or have we spawned a generation of pampered, spoon-fed kids with their hand out and no will to go beyond the minimal effort?  If so, I'm afraid that we will continue to see our economy surpassed by those countries who are willing to put their nose to the grindstone and give more than expected of them, and who are willing to be patient for their gratification and rewards.  Unless they can find it within themselves to put their employer first, in hopes that their hard work will pay off in the future, I'm afraid Millennials will find themselves living in their parents' basements, dreaming of the next job and their instant reward.  I know I'm going to sound old-fashioned, but narcissism is no replacement for a good work ethic.  I can hear my father now....

Proverbs 27:18    "Whoever tends a fig tree will eat its fruit, and he who guards his master will be honored."