Pieces Are Being Moved On The Cosmic Chess Board

Having trouble making sense of the players in the Middle East and how it all might align with End Times prophecy?  Don't worry ... I am, too.  To be honest, I have never felt that I needed to position everything I was seeing with the puzzling timeline offered by Scripture.  It's not that I think I will be raptured and it will be of no consequence to me -- (I happen to think that we Christians will be needed on earth, for a time, to offer words of hope, encouragement, and endurance during the battles leading up to God's wrath against the wicked) --- it's just that I have always figured that God will clearly reveal those times and His instructions for His people, when it is necessary.
That being said, it's hard to ignore some of the major world events we are seeing before our eyes.  And it's really hard to look at them through Western eyes.  We, in America, tend to forget that the Bible's inspired writers and prophets were Middle Eastern, and we try to translate and understand their epistles and letters through the lens of today's Western experience.  So, I'm not here to say that I have any unique insight into what's happening around the globe; and I probably have more questions than answers.  But I thought we should at least look at what's in the news and be aware of how events can impact us in the present, as well as their End Times implications. 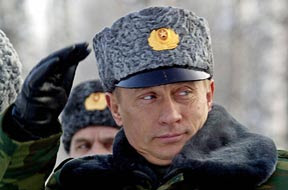 For me, right now, it's all about Russia and what is really going on between the world's superpowers in the Middle East.  It's all over the news that Russia has deployed a small, but consequential military force into Syria, which may have the potential of changing the dynamic in that war-torn country.  It has been four years since the start of the Syrian civil war, with U.S.-backed rebel forces fighting against Syrian President Bashar Assad and his faithful Syrian army.  The sectarian war has created a breakdown in authority, providing the opportunity for ISIS to get a foothold and begin building their caliphate.  Russia has said that they want to assist Syria in fighting ISIS, and that is their primary objective in coming to Syria's aid.
But, as always, when global powers begin making military moves, there is more to the story.  From what I can gather, there is a history of a Russia/Syrian alliance, back to the 1970s when Assad's father, Hafez al-Assad, aligned with Moscow.  In fact, Syria is among the last proxies, or representatives, of the Russian political influence in the Middle East.  Interestingly enough, that puts Russia on the same side as Iran, who also provides military aid and guidance to Assad through their proxy, Hezbollah.  Apparently, Vladimir Putin was getting a little concerned that Iran was having too much influence in Syria, hence the show of military force.
There are also those who surmise that Russia's escalating presence in the Middle East might forecast a threat to Western interests; or on the other hand, provide valuable intelligence and military aid in fighting Islamic jihad.  Either way, Russia gives themselves a way to bargain for Western and European concessions in regards to Ukraine and economic sanctions.
But what I find even more interesting than the Russia/Assad vs. US/Syrian rebels chess match, is that Russia appears to be partnering with China in forming a coalition to take the fight to ISIS in the Middle East.  One news source reported, "according to a senior officer in the Syrian Arab Army (SAA) that is stationed inside the Syrian coastal city of Latakia, Chinese military personnel and aerial assets are scheduled to arrive in the coming weeks (6 weeks) to the port-city of Tartous." 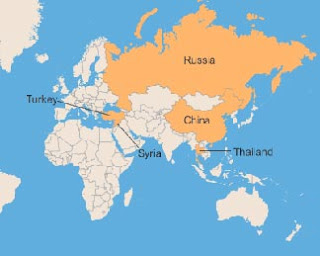 Add to this news the suggestion that Turkey was waiting in the wings to take advantage of Syria's civil war, (before Russia and China showed up), and you have the makings of the major players in both the Ezekiel 38 war and "the army of the Kings of the East" mentioned in Revelation, Chapters 9 and 16.
Can I make all the puzzle pieces fit nicely to form a clear picture of End Times events?  No.  But there is enough going on that my spiritual radar is up.  And it just seems as if the world is careening towards, if not an apocalyptic alignment of a one-world government, economic, and religious system, then at least an Armageddon-style conflict that will result in the fulfillment of Biblical prophecies of an emerging New World Order and Anti-Christ kingdom.
Of course no one, least of all me, has any proof that any of this will happen, or that it is Biblical.  But, as we are called to watch and stay awake, I think it is incumbent upon us to pay attention to these events that are quickening our spirits.  So, listen carefully to the words of Vladimir Putin, as he appears before the UN General Assembly today.  See if you can hear the prophetic words of Scripture in his speech.  And then remember --- all these world powers are jockeying for position; for winner-take-all in the sweepstakes that is the Middle East.  But we know that there are really only two players in the game ... the devil and God.  We are living out a cosmic chess match that has already been won in the spiritual realm.  All that remains is for our KING to be crowned!

Luke 21:36    "But stay awake at all times, praying that you may have strength to escape all these things that are going to take place, and to stand before the Son of Man."

Email ThisBlogThis!Share to TwitterShare to FacebookShare to Pinterest
Labels: The Bible, World Events