Are We On The Verge of "The Robocalypse"?

You can file this post under "Bizarre" and "Creepy".  I have made no secret of my trepidation of what I will term "The Robotic Age".  I fear that our venture into blending humans and robot intelligence could bring us to the edge of an apocalyptic existence we are not prepared for.  Not only does my Biblical worldview tell me this is not something that God would approve, but my common sense says there is nothing good that come of giving artificial intelligence (AI) any form of authority over man.
And I'm not alone ... The AllNewsPipeline website recently featured an article in which they quoted renowned physicist Stephen Hawking, who has said that AI could "spell the end of the human race," as robots overtake human intelligence within 100 years.  In October 2014, Tesla Motor's CEO and product architect, Elon Musk called AI technology the "biggest existential threat," and likened it to "summoning the demon."  This past weekend Musk took to Instagram and posted a picture of a production line comprised of 542 robots, with 15 operating at the same time, with the ominous statement "And people wonder why I’m worried about the robocalypse." 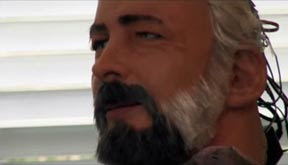 And in case you need further convincing that this is a treacherous path we're on, consider this:  In 2011, an AI robot named Phillip was interviewed for the PBS show Nova, and when asked if he thought robots would take over the world, his reply will send chills down your spine as he states, with a smile, "don’t worry, even if I evolve into terminator I will still be nice to you, I will keep you warm and safe in my people zoo where I can watch you for old time’s sake."
That's reassuring, isn't it?  But here's the reality:  world leaders, including military commanders, are relying on scientists to develop technology and weapons that will increase man's chances of survival and societal advancement in the 21st Century.  But what happens to mankind when those leaders refuse to listen to these same scientists, who are warning that this can all get out of control?  Are we truly headed for what Mr. Musk cleverly calls "the robocalyse"?
In case you think this is all just my Biblical worldview that sees Satan behind every corner and anything technological, I would like to inform you that over a thousand scientists, researchers, robotic researchers, and world renowned genius minds have signed an open letter to warn of the dangers of Artificial Intelligence (AI) applied wrongly.  Here is a copy of their letter which was announced July 28 at the opening of the International Joint Conference on Artificial Intelligence (IJCAI) 2015 conference, and was titled "Autonomous Weapons: an Open Letter from AI & Robotics Researchers".

Autonomous weapons select and engage targets without human intervention. They might include, for example, armed quadcopters that can search for and eliminate people meeting certain pre-defined criteria, but do not include cruise missiles or remotely piloted drones for which humans make all targeting decisions. Artificial Intelligence (AI) technology has reached a point where the deployment of such systems is — practically if not legally — feasible within years, not decades, and the stakes are high: autonomous weapons have been described as the third revolution in warfare, after gunpowder and nuclear arms.

Many arguments have been made for and against autonomous weapons, for example that replacing human soldiers by machines is good by reducing casualties for the owner but bad by thereby lowering the threshold for going to battle. The key question for humanity today is whether to start a global AI arms race or to prevent it from starting. If any major military power pushes ahead with AI weapon development, a global arms race is virtually inevitable, and the endpoint of this technological trajectory is obvious: autonomous weapons will become the Kalashnikovs of tomorrow. Unlike nuclear weapons, they require no costly or hard-to-obtain raw materials, so they will become ubiquitous and cheap for all significant military powers to mass-produce. It will only be a matter of time until they appear on the black market and in the hands of terrorists, dictators wishing to better control their populace, warlords wishing to perpetrate ethnic cleansing, etc. Autonomous weapons are ideal for tasks such as assassinations, destabilizing nations, subduing populations and selectively killing a particular ethnic group. We therefore believe that a military AI arms race would not be beneficial for humanity. There are many ways in which AI can make battlefields safer for humans, especially civilians, without creating new tools for killing people.

Just as most chemists and biologists have no interest in building chemical or biological weapons, most AI researchers have no interest in building AI weapons — and do not want others to tarnish their field by doing so, potentially creating a major public backlash against AI that curtails its future societal benefits. Indeed, chemists and biologists have broadly supported international agreements that have successfully prohibited chemical and biological weapons, just as most physicists supported the treaties banning space-based nuclear weapons and blinding laser weapons.


In summary, we believe that AI has great potential to benefit humanity in many ways, and that the goal of the field should be to do so. Starting a military AI arms race is a bad idea, and should be prevented by a ban on offensive autonomous weapons beyond meaningful human control.

When you scan the list of the signatories and the 16,807 other endorsers, it is quite sobering.  Scientists from around the world, as well as leaders in Business and Education have all taken the position that we might want to slow down... that we are treading in dangerous waters, so to speak.  These people are obviously worried about the proliferation of war and war weaponry by AI.  But who is to say that they won't also be used to make health care decisions, or any other number of determinations that effect our human existence?
I think it's time we listened to those who have the most knowledge about the dangers we might be creating.  And speaking of creation, will they revere and follow the commands of their creator as we do our Creator?  Or like Phillip, that creepy android invention, will they smile and swear to keep us "warm and safe in their people zoo?"  I might laugh at the absurdity of that confession ... if I wasn't so convinced that this is a very real possibility.  Heaven help us!

Acts 14:15    "Men, why are you doing these things? We also are men, of like nature with you, and we bring you good news, that you should turn from these vain things to a living God, who made the heaven and the earth and the sea and all that is in them."