The Spiritual Battle In Entertainment 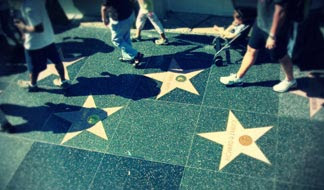 When are we going to face it?  When are we going to admit that this culture is under spiritual attack, and we are losing the battle?  All around us is the evidence that Satan has infiltrated this earthly realm, and we seem helpless to stop his demonic influence.  Fame and Fortune are the temptations, and I'm afraid we are complicit in the downward spiral of the entertainment industry, and those who are willing to sell their souls to the devil for a piece of the action.
All we have to do is look no further than the nearest TV screen, website, or technology device to see the utter invasion of our culture by the servants of Satan. Ultimately, I think that the arena of entertainment shows us the essence of what our culture is, and who it worships.
Ask yourself this question ... Where do we go to find the rest, relaxation and peace from the daily struggle that our physical bodies endure until we are united with our Savior in eternity?  How many of you answered God's Word?  Or did your mind automatically think of your favorite TV show; some popular song that takes your mind off your troubles; or perhaps you like to "escape" by tuning in to the latest escapades of some Hollywood star.
I know I sound like I'm old-fashioned, but I lament the "technological age" and its advancements -- the age that allowed us to instantly hear or watch a presentation designed to amuse us and occupy our minds; the age that put a mini-computer in everyone's hand, so that we could be connected to the world every minute of every day.  And so much of what we have focused on the last fifty or more years has been designed to bombard our senses.
We should know, as Christians, that "the spirit is willing, but the flesh is weak".  We should know that when we accept Christ as our Savior, our spirit is seated in Heaven with Jesus (Ephesians 2:6), just as it continues to reside inside us.  We belong to Him, and Satan cannot touch our spirit.  But the devil tempts our senses and our flesh to try to lure us away from God and compromise our purpose on this earth: to glorify God and His Kingdom.  Our flesh is easily tempted through how we choose to entertain ourselves.  And sadly, it is the entertainers that rise to the top that showcase the true nature of our culture and how far we are willing to go to be tempted away from God.  Have you ever realized that the reason they are so successful is because we have asked to be entertained in more and more perverse ways?  I mean, it doesn't seem to me that Satan has had to work very hard to convince us to embrace some of this un-Godly entertainment.  It's not as if he forced it on us --- don't we have some ownership in the immorality by the evidence that we have accepted it?
How many of us instinctively know that the perverted antics of Miley Cyrus are immoral?  Besides the obvious and overt sexual movements and the total lack of modesty, have any of you ever questioned why she feels moved to stick her tongue out in an ever-increasing and inappropriate manner?  (I will spare you the image of her act of perversion).  Would you be surprised if I could show you that this bizarre behavior is alluded to in the Bible?  Just read Isaiah 57:4:  Whom are you mocking? And against whom do you make a wide mouth and stick out your tongue? Are you not children of transgression, the offspring of lies...?
Before doing some research on this decidedly wicked gesture, I assumed in my worldly understanding, that she was a spoiled child sticking her tongue out at the establishment of society, and announcing to the world that she was going to play by her own rules.  Oh, she's playing by rules alright, but they're not her own.  Further research revealed that in the occult, of which I believe she is heavily steeped, sticking out your tongue in the exaggerated manner of Miley is not only showing disdain for us righteous people, but is specifically a taunt to the King of Kings and the Lord of Lords. It is an intentional and calculated affront to God.
Now, if we were a truly moral and righteous culture, why would we allow this display against our Lord?  Why haven't we investigated this vulgar display (knowing in our spirit that there is a deeper meaning) and demanded that she be removed from influencing our children?  Perhaps the answer is that we have become desensitized to Satan's tactics.  Would it surprise you to know that Miley's form of mocking our Lord is just the latest version of an ancient Satanic taunt -- that we've tolerated it before in our culture? 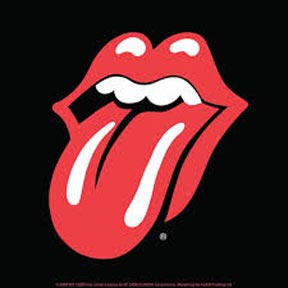 Remember this artwork on the cover of a Rolling Stones album?  Or what about the gestures of Gene Simmons of the rock band Kiss?  Now, can you see how easily it has been for Satan to lead us down this path?  And what's amazing is that it's been there in front of us the whole time.  If we had been paying attention, we would have noticed how often entertainers boldly declared that they traded their souls to the devil for fame and fortune.  Miley and Katy Perry have certainly made that clear in some of their interviews.  And so have others.  Here are just a few examples:
Bob Dylan:  When questioned if it was his destiny to become such a huge star, he replied, "I made a bargain with it."  When asked who "it" was, he said, "The chief commander on this earth and in the world we can't see".  To anyone who has studied spiritual warfare, it is clear who he is talking about.
Beyoncé:  She has been seen clad in an outfit featuring the classic goat's head that is used in Satan worship, and revealed in an interview:  "I have someone else that takes over when it’s time for me to work and when I’m on stage, this alter ego that I’ve created  kind of protects me and who I really am."  The name of her alter ego is Sasha Fierce.
Robin Williams:  In an US Weekly interview, the genius comic once revealed that "Yeah! Literally, it’s like possession ‑ all of a sudden you’re in, and because it’s in front of a live audience, you just get this energy that just starts going…".  But he further stated that during his stand-up comic routines in clubs, he became possessed almost like Jekyll and Hyde, where he would go into his manic, stream-of-consciousness rants filled with vulgar language, perverse sexuality and the glorification of illicit drugs and drunkenness.  Like his comic idol Jonathan Winters, "the voices were always screaming to get out".
Jim Morrisson:  During an interview, the Doors frontman admitted that he drank to "silence the constant voices of the demons".
Heath Ledger admitted that, in doing research for his role as The Joker in a Batman movie, he opened himself up to evil spirits and meditated on them to capture the essence of his character, which he called "a psychopathic, mass murdering, schizophrenic clown with zero empathy."  Sounds like he was channeling Satan himself -- and we see the dark road that Ledger took in quelling those demons.
I could go on and on.  But I am deeply disturbed that we call ourselves Christian and we have not safeguarded our culture.  And now these people, who have allowed themselves to be tempted by Satan in their pursuit of fame and fortune, have easy and open access to our children through various entertainment venues.  We simply cannot know what they are watching or listening to when they are out of our presence.
But we better know that demonic oppression and enslavement is real, and what  happened with the above-mentioned entertainment stars is proof of that.  We, and our children, are under attack!  The Bible says that Jesus came to set the “captives free”.  This culture has adopted a general belief in a generic god of our own making; but people need to understand that a higher power has never, and will never, save anyone from God's judgment.  But believing on the Lord Jesus Christ, and asking Him to wash you clean in His shed blood can save you for all eternity.  As I look around me, and as I casually glance at the ways we entertain ourselves, I am deeply saddened at where we have allowed Satan to take us.  The question now becomes ... what are we going to do about it?  It is time we get in this war for the salvation of our families, our communities, and our country!  If spiritual warfare has been a vague term in your religious vocabulary, it's time to study up on it and get ready to do battle!