What Were They Thinking?

I'm sure the readers of this blog were just as astonished as I was when I heard that the Tennessee Administrative Office of the Courts made changes to their permanent parenting plan form.  Very quickly after the Supreme Court decision legalizing gay marriage, the AOC revised their forms to replace "Mother" and "Father", with parental designations "Parent 1" and "Parent 2".  WHAT?!?!?  I thought to myself, "isn't it enough that this wicked generation desires to expunge gender from marriage ... now they want to rid parenthood of gender, too?"
As appalled as I was at that decision, I was equally elated to hear of the adverse reaction to that insane decision.  Apparently, the AOC received so much criticism for this amendment, that they have reversed their decision, and once again will legitimately recognize a mother and a father as parents of a child ... for now.
I understand that we are likely to see our society rush towards similar changes in an attempt to recognize the "different types of families" that now dot our cultural landscape.  But that doesn't mean that we have to approve of it, or go along with such changes.  How have we come so far, so fast, that we think the terms "mother" and "father" should become obsolete?
And if, in this politically correct world, this kind of controversial decision is supposed to signal equality by removing the gender qualification for a parent, I must ask this question ... doesn't the designation of "Parent 1" indicate that this parent is somehow superior to "Parent 2"?  And by removing "mother" and "father" from these forms, isn't that, in effect, violating the rights of heterosexual parents who embrace these titles?  Why must we be forced, or reduced, to a lesser classification?  Isn't that what the fight for gay marriage was all about... the right to call your relationship as you see fit?
But this particular form is just the tip of the iceberg, and it is not the end of Satan's battle to eradicate our Biblical identities.  In 2011 the State Department removed the words mother and father from U.S. passport applications.  Of course, they had a culturally acceptable explanation ready to explain that decision:  “We find that with changes in medical science and reproductive technology that we are confronting situations now that we would not have anticipated 10 or 15 years ago.”  So, is there anyone else besides me that doesn't necessarily approve of where medical science and reproductive technology have taken us ... that think perhaps we've abandoned or corrupted God's design for our bodies, our marriages, and now our families?
Of course, I understand that the basis for that last statement is a fundamental belief that God exists.  Without that core component, there is no justification for my argument.  But here's what I don't get .... the understanding of distinct genders among the human race; the concept of marriage as between a man and woman, and who makes up the individual parts of a family, have been consistent and unchanging for thousands of years.  How in the world, in the last couple of decades, do we think that we're so evolved that we've got a better plan than our Creator?  I suggest that these social progressives stop for just a moment and tell me what is wrong with the following logic: 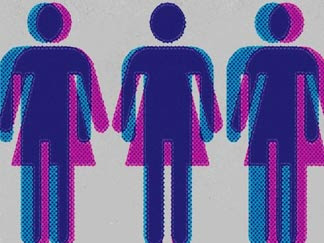 • Mother is the term that the One who created us gave to a woman who bears a child in pregnancy.  Only a woman can do that ... the gender-neutral term "Parent" does not designate if you are the person in whose body that fetus grew into a full-term baby.  The role of a mother is to be taken seriously; her job, as defined in the Bible, is to be available morning, noon, and night; to interact, discuss and help her child process life; to teach her child a Biblical worldview and to love the Scriptures; to train a child in developing their spiritual gifts and strengths; and finally to nurture her child --- a term that has always had a distinctive feminine connotation.  So, tell me, can you identify if it is Parent 1 or Parent 2 that has delivered the fruit of the womb?
•   Secondly, Father is the term that God used to indicate the person who would instruct and discipline those borne by the mother.  The Father is the instrument by whom God shows His ultimate authority.  The human father models God as the teacher and ruler of his family.  It is the responsibility of the Father to provide Christian discipline that will enable children to grow up with reverence for God, respect for parental authority, knowledge of Christian standards, and habits of self-control.  Chastening, discipline, and counsel by the Word of God, giving both reproof and encouragement, is at the core of a father's duty.  There is a distinct countenance of leadership that distinguishes a father from a mother --- that is true no matter how hard the feminists and progressives try to convince us that their advanced social agenda is better for the development of a confident, secure individual.
And here's what really concerns me ... by using the designations "Parent 1" and "Parent 2" are they paving the way for "Parent 3, 4, or 12"?  If you take away the male and female identification of a parent, what is to stop us from saying multiple parents are necessary to birth and raise a child? And by denying gender roles in parenthood, is Satan trying to signal that he has a plan to introduce a way to create a child without male and female interaction?  Can we truly say that we are that far off?  All you have to do is browse the internet to find all the freaky experimentation being done in the name of .... oh, yeah, medical science and reproductive technology.
In the end, I guess I shouldn't be that surprised that this renaming of parental roles has come so quickly.  It seems as if the goal is to confuse and control the next generation.  If Satan, through his representatives in this realm, can remove the distinctive and unique characteristics that make us who we are in the eyes of God, then he will be able to convince mankind -- no, wait!  I can't use that term.  How about human race?  Nope!  Reproductive technology is combining human and animal DNA, and also trying to create a hybrid human robot ... so, I guess I'm going to have to settle for the fact that Satan will successfully disassociate whatever form of existence the next generation becomes from the Source of Life who created them.  There will be no need for terms like man, woman, wife, husband, mother, father, son, daughter, sister, brother, him or her.  We will be reduced to a life form that is generic, nonspecific, bewildered, and debased.  Unfortunately, I'm afraid we are taking the first steps toward that reality.  Sweden has even gone so far as to adopt a gender-neutral pronoun ... hen.  Really?!?!  Please, God, save us from ourselves!  Preserve us in Your image, just as You created us!

Proverbs 1:8-9   "Hear, my son, your father’s instruction, and forsake not your mother’s teaching, for they are a graceful garland for your head and pendants for your neck."