If you have been uncertain if we live in modern-day Babylon, then this should settle any doubt you might have.  I found it sadly ironic that the website that tempted over 32 million people to cheat on their spouse by advertising "Life is too short.  Have an affair", is now accusing the group that hacked them of being "immoral."  Spokesmen for Avid Life Media (ALM), which owns the tempting website Ashley Madison, released the following statement:

This event is not an act of hacktivism, it is an act of criminality. It is an illegal action against the individual members of AshleyMadison.com, as well as any freethinking people who choose to engage in fully lawful online activities.
The criminal, or criminals, involved in this act have appointed themselves as the moral judge, juror, and executioner, seeing fit to impose a personal notion of virtue on all of society.
We will not sit idly by and allow these thieves to force their personal ideology on citizens around the world. We are continuing to fully co-operate with law enforcement to seek to hold the guilty parties accountable to the strictest measures of the law. 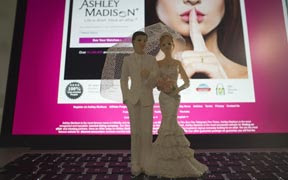 Thanks to the U.K. website "The Telegraph", and Forbes.com for much of the facts and statistics on this post.

Isaiah 47:10   You felt secure in your wickedness, you said, “No one sees me”; your wisdom and your knowledge led you astray, and you said in your heart, “I am, and there is no one besides me.”