The Spirit of Jezebel & The Empire State Building 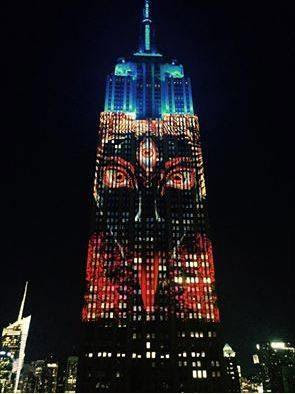 Just when I think this nation can't turn any further away from YHWH, I see the disturbing image of the Hindu goddess Kali projected on the Empire State Building... and it's supposedly all in the name of art and projecting the human race's need to avoid our coming extinction.
Here's how the subterfuge is presented:  Filmmaker Louie Psihoyos announces that he wishes to initiate an artistic presentation called Projecting Change, which projected pictures of endangered creatures onto the NYC skyline.  Meant to spark awareness of massive wildlife extinction, and to draw attention to the alarming rate at which species are dying, images such as that of the now famous Cecil the lion, and hundreds of other nameless endangered animals were showcased on the Empire State Building.
Of course projecting images on New York City's most iconic building is bound to make a statement.  But I can think of many other causes that could have used the publicity to garner support and sympathy .... oh, say the fact that 22 of our military veterans die each day from suicide, for instance; or the innocent Christian girls in the Middle East who have been kidnapped as sex slaves for the barbarians called ISIS; or, how about the innocent fetuses sold for body parts by Planned Parenthood?
But apparently this filmmaker felt that Mother Nature deserved the public's attention more, so he drafted artist Andrew Jones to design the last image to deface... uh, I mean appear on the Empire State Building.  It was the fierce portrait of Kali, who is the Hindu Goddess of Time, Change, Power and Destruction.  She was presented as an avatar "to fight the dangers of pollution and extinction."  In reality she was presented to the world as an idol; her name means black, time, death, lord of death; and she is known as the “Black One”, or the “Dark One”.
I ask you, how is this any different from the other false goddesses that have turned mankind away from the worship of the true God?  In an astute 2009 blog I found a comprehensive study of the stable of "mother goddesses" who all have the same spirit of destruction and dominance.  I have written of this phenomenon across cultures in the past, but this article gives an excellent summation.  Historian César Vidal is quoted as saying, "The mother goddess received different names and external appearances, but, in substance, she was always the same. In Egypt, she was called Isis. In Crete, she was represented as a mother who made friendly contact with snakes. In Greece she was known as Demeter, and in Rome she was worshiped as Cybele, the Magna Mater (Great Mother), a mother goddess of Phrygian origin. There is practically no ancient culture that did not worship this type of deity."  So, it looks as if we just falling right in line.
But perhaps one of the most important architects of this false worship was Jezebel, the pagan Queen of Israel.  When the Phoenician princess Jezebel married Ahab, the king of Israel, she influenced him to fully establish Baal worship in his realm.  You see, in Phoenicia, Baalism included the worship of Molech with fiery sacrifices of children and the worship of Astarte, the Phoenician Ishtar, Queen of Heaven.  Jezebel caused altars to be erected to this idol in every part of Israel; and at one time four hundred priests attended the worship of Ishtar/Ashteroth.  She had such a powerful control over Ahab, that he built a temple to Baal, and the Bible records that he sinned against God more than any other king.  But here's the result of that idolatrous relationship:  The nation of Israel became so entangled with the Queen of Heaven/Mother Goddess worship that YHWH judged them by sending them into captivity by the hand of the Assyrians, and the nation of Israel was scattered to the ends of the earth.  2 Kings 17 tells us that the Israelites turned away from worshipping God, built false idols, worshipped Ashteroth, killed their children, served Baal, practiced witchcraft, and sinned greatly against God.  For all that, "the Lord was very angry with Israel, and removed them from His sight; there was none left but the tribe of Judah alone."
So, how are we any different?  How do you think God views the Hindu Goddess Kali being projected as worthy of worship by our nation?  Because that is what we are doing when we admire and honor her; when we pay homage to her and magnify her as worthy of our adulation?  And aren't Kali's other name descriptions reminiscent of the spirit of Jezebel?  I mean, didn't Jezebel bring Change and Power and Destruction upon the nation of Israel?  And by her appearance on the Empire State Building, is Kali saying, "Now is my Time"?
You may think this is all just my fanciful, over-exaggerated imagination.  But I have found that the themes throughout the Bible are not limited to ancient times.  They have been repeated throughout the cycles of man's history.  But, we don't have to be influenced by this adulterous and deceiving generation.  Just reading the comments after some of the articles on this spectacle showed me how easily the world is fooled by those who will say that all religions are the same.
But we know better.  We can stand our ground, denounce such unfaithfulness, and speak louder of the power of YHWH; the power to overcome and defeat all such false idols and the devastation that follows in the wake of their worship.  We will not surrender to this spirit of Jezebel or any of her fellow false goddesses.  Artists can paint their portraits across the skyline of NYC; but they will all disappear when the coming of the King of Kings is visible to the whole world.  It will soon be His time!

1 Kings 21:25    "There was none who sold himself to do what was evil in the sight of the Lord like Ahab, whom Jezebel his wife incited."
Posted by Pam Kohler at 7:00 AM