Think Agenda 21 Abuses Our Freedoms? Take A Look At Agenda 2030!

Thanks to the website, End of the American Dream, for providing the following exciting news (wink, wink).  Next month, the Pope is traveling to New York City to kick off a conference at the United Nations in which "The 2030 Agenda" will be presented to the world.

We are all familiar with the "sustainable" aspects of the UN's Agenda 21, whose stated goal was to protect the environment in the form of a  "comprehensive plan of action to be taken globally, nationally and locally by organizations of the United Nations system, governments and major groups, in every area in which humans impact the environment.”  This was conveniently encapsulated under a comprehensive objective called "climate change".
Now, of course, it was also stated that such plans were non-binding, and voluntary, but someone forgot to tell the governments of the world (including ours) who have been trying to implement restrictions on the world's human population through Agenda 21 since its inception in 1992.
Under the guise of providing adequate shelter for all; promoting sustainable land-use planning and management; promoting sustainable energy and transport systems in human settlements; and other supposed moral objectives to care for the world's underprivileged, it is really all about terminating our private property rights in favor of confiscation and controlling the world's population and food supply... all voluntary, of course. 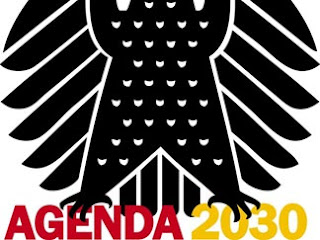 But this new global initiative is being billed as "a new Universal Agenda for humanity".  In addition to addressing climate change, it also sets ambitious goals for areas such as economics, health, energy, education, agriculture, gender equality and a whole host of other issues.... in other words, the globalists want to usher in the One World Government that controls every aspect of our lives.  Think I'm kidding?  Here is a portion of the preamble of Agenda 2030:
This Agenda is a plan of action for people, planet and prosperity. It also seeks to strengthen universal peace in larger freedom. We recognize that eradicating poverty in all its forms and dimensions, including extreme poverty, is the greatest global challenge and an indispensable requirement for sustainable development.
All countries and all stakeholders, acting in collaborative partnership, will implement this plan. We are resolved to free the human race from the tyranny of poverty and want, and to heal and secure our planet. We are determined to take the bold and transformative steps which are urgently needed to shift the world onto a sustainable and resilient path. As we embark on this collective journey, we pledge that no one will be left behind.
The 17 Sustainable Development Goals and 169 targets which we are announcing today demonstrate the scale and ambition of this new universal Agenda. They seek to build on the Millennium Development Goals and complete what these did not achieve. They seek to realize the human rights of all and to achieve gender equality and the empowerment of all women and girls. They are integrated and indivisible and balance the three dimensions of sustainable development: the economic, social and environmental.
I don't know about you, but this sounds awfully forceful and authoritative to me.  When you read the 17 core goals of the Agenda, they sound utopian and idealistic ... things such as "End hunger, achieve food security and improved nutrition and promote sustainable agriculture", and ... "Ensure availability and sustainable management of water and sanitation for all", or ... "Promote peaceful and inclusive societies for sustainable development, provide access to justice for all and build effective, accountable and inclusive institutions at all levels", and one more ... "Reduce inequality within and among countries."  Notice that the word "sustainable" is evident in nearly all of  them, while there is no mention of individual rights or how they are going to get individual landowners to cooperate. And this new agenda gives no perception that is voluntary, does it?
You see individual liberty and freedom aren't really conducive to a "global initiative".  You can't have people doing what they want if you plan on controlling every aspect of their lives.  After all, it's "bad for the planet."  And you might be interested to know that one of the goals of the sustainable development globalists is to push the human population into giant “megacities” and to allow nature to recapture much of what has already been settled by humanity.  See where this is going?  They can't have people living in rural areas growing their own food, and living sustainable lives on their own!  They must be controlled!
So no matter how the Pope or other world leaders try to soft sell the idea to us, we mustn't be fooled.  This is just the next phase of mankind's steady march towards a new world order and the sudden and powerful deception of the Anti-Christ.  But those of us who put our faith in Jesus Christ and are covered by His blood need not fear.  Our eternal freedom cannot be taken from us and we shall never disown or renounce our Savior.  The only thing that we need to sustain us is our Lord's Grace... and it will be sufficient.

To read more about Agenda 2030, and this new universal initiative for humanity, click here.

Psalm 2:1-3     Why do the nations rage and the peoples plot in vain? The kings of the earth set themselves, and the rulers take counsel together, against the Lord and against his Anointed, saying, “Let us burst their bonds apart and cast away their cords from us.”