The Race Is On!

I'm sorry, but I happen to be one of those who no longer puts much faith in our national elections.  There was a time when I thought my vote counted for something, and the American people truly had a voice in who governs our nation.  Perhaps I've just grown cynical as I watch those in power get richer at our expense, and the election process become more corrupt and fraudulent.  I no longer trust the election results, and I believe those that are chosen to run for office are selected; not by the people of this country, but by power brokers who answer to unknown elitists who govern the world.
I know that sounds like some dystopian theory, like 1984 or Brave New World, but I've realized that any chance of Utopia has long been abandoned.  Just consider the scandals that we've faced in the last few years ... Fast and Furious, Benghazi, the targeting by IRS, Hillary's missing emails, sanctuary cities ... have any of these investigations by Congressional Committees yielded any results?  Are they intended to?  Or are they just for show; to mollify the populace's outrage over the immoral and unethical practices of those who are supposed to be representing us? 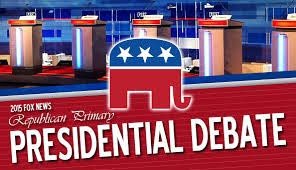 And that brings us to the primetime Republican debates this evening.  Think they will yield any true results?  Or are they all for show, too?  Are the 16, or so, candidates just a ruse to make us think we really have a choice, or that we stand a chance of picking the best candidate that embodies our values?  Sure, they all are trying to claim the mantle of "true Conservative", because they think that will garner the most support from the dissatisfied American voter.
So, will we really hear their true positions on policies and where they want to take the country -- or will they all listen to their political strategists and "game" the air time to try to appeal to a broad spectrum of voters; or better yet, try to deliver the cleverest soundbite that will be repeated ad nauseam on the morning talk shows?  Other than Donald Trump -- who might just be the biggest "gamer" of them all -- will anyone step outside the tightly scripted box and give us just a touch of reality?
Will the questions even be fair and balanced?  Or will one or two candidates get "soft balls", while others are targeted to fail?  Don't get me wrong ... I'm going to be watching!  But not because I expect that there is one candidate who will rise to the top and be our knight in shining armor.  I'm actually going to  watch because I hope to be able to foretell, by the answers, what the true objective is for the next President of these United States.
You see, I'm nearly convinced that this person has already been selected by the powers-that-be, and it doesn't really matter whether they are Republican or Democrat.  The path that this country will take has already been decided and put in motion.  The 45th President will just help move us in that direction.  And will you really be surprised if we end up with another Bush or Clinton? Really???
Frankly, I am amazed at my own skepticism and distrust.  Just a few years ago, I still believed in the honor and propriety of our election process.  I thought there was a significant difference in the philosophies of the two major parties, and that the will of the people would win out.  But it seems as if the veil has been removed from the process, and I see that we've been deceived for a very long time.  I think we would be surprised if we dug too far under the surface of the men who have led this nation during the last century.  I will leave the conspiracy theories to others who have done extensive research, but I have to admit that I no longer wear my rose-colored glasses.
It will be interesting to see how these debates play out tonight.  Will there be a discernible and underlying message to the American people about what we can expect after the next election?  Will we be able to tell who has already been crowned "The Chosen One"?  Will there be any man who is God's true representative on that stage?
I think that is my greatest fear ... that I will finish the night feeling as if God has relinquished His authority in establishing those who rule us, and is leaving us to our own particular schemes, agendas, and tactics.  And I think we all know how that will turn out ... so, if that is the case, I invite you to join me, my family, and my friends in strengthening our faith to overcome whatever the election might bring.  We are ultimately responsible in how we live out each day -- whether in prosperity or hardship; success or failure; or in the glow of His Light or the depths of Darkness.  Remember, we are not of this world; this is our temporary citizenship.  The more Americans who can realize that and put their faith in the next world; the fewer Americans there will be who will cast all their hope on the polling results of an inconsequential debate.  Put your trust in no man!

Psalm 40:4   "Blessed is the man who makes the Lord his trust, who does not turn to the proud, to those who go astray after a lie!"
Posted by Pam Kohler at 7:00 AM