It has been a year since ISIS declared the Caliphate and the world began to see just what that meant.  In February of this year, I brought you the story of Maryam, a young Iraqi Christian girl, forced to flee her home near Mosul as ISIS instituted its apocalyptic persecution of Christians.  As just one of millions of refugees, it would have been easy for the world to ignore her plight... except that there was something special about Maryam.  As part of a group of refugee children interviewed by a Christian Broadcasting Network reporter, the world was stunned by her unfaltering faith as she declared that she had no desire to retaliate against ISIS for destroying her world ... "I won't do anything to them," Myriam asserted. "I will only ask God to forgive them." 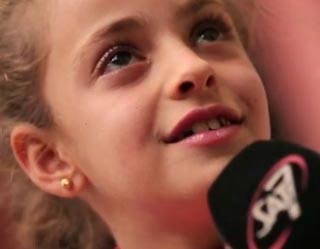 It was apparent as you watched that video that this child was filled with the Spirit of God.  (Maryam's portion of the interview begins at the 1 minute, 4 second mark).  There was a peace in her eyes.  And in the midst of such upheaval and violence, she possessed a serenity that could only come from Heaven.  At the time, I was left wondering how we American Christians would react if faced with sudden removal from our homes and unprecedented persecution.
Now, just a mere six months later, although we are not experiencing the level of violence that is being perpetuated against Middle Eastern Christians, we are certainly seeing an abandonment and an excoriation of true Christian values in our culture ... and sadly, in the Church!  The rhetoric from anti-West extremists, and ISIS, itself, is more pronounced and specifically directed towards us; and it seems inevitable that our foreign policy will enable those who hate us the most to have the means to plunge the world into the chaos and destruction that mark the End Times.  So, how is your faith holding up?  Are you able to forgive those who wish us harm? Are you fearful?  Can you say that you possess the peace and confidence exhibited by this young Christian refugee?
I was thrilled to find that CBN has released a new video after catching up with young Maryam, who along with her family, lives in a small, two bedroom trailer in a community of displaced Christians in Erbil, the capital of Kurdistan in northern Iraq.  Now 11, she is better able to elucidate on her ability to forgive those who hate her.  "In the Bible, Jesus said to us, 'Don't be afraid, I am with you.' And also, He said forgive others no matter who they are [who] hate you. You have to forgive them," she said. "Jesus is my Father, and He is my Creator. I have no one else better than Him. When ISIS drove us out of our home, His hand was on us and He saved us." 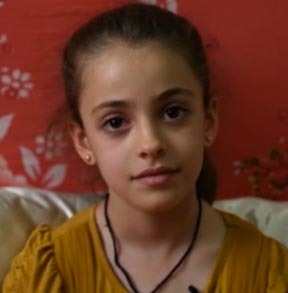 Maryam said she cherishes the Bible because it is God's love story to humanity.  "The only story in the Bible is the story of the resurrection of Christ Jesus the Lord because through that story, we can have hope."  She says that prayer is an important part of her life.  She doesn't pray for a bigger or nicer home, or more things.  "When I pray, I pray that God might help us to go back home. And also that the peace of God might come all over Iraq and also, may God forgive ISIS."
It is an interpreter's voice you hear as she speaks in her native language, but you don't need to understand the words she speaks to apprehend where her message comes from ... it's in her eyes and the force of her voice.  "The words I am speaking to you are not coming from a random place. They come from the Holy Spirit," she insisted. "The Holy Spirit gave me these words to tell you."
Furthermore, she has words of advice for us here in America.  They are aimed at American children, but are words we all need to hear.  Maryam advised Christian children in the United States and elsewhere to love God and share their faith with friends.  "They don't need to be frightened and also, things that happen in their lives, they should learn from us and our lives," she said.  "This should not be to get something or to get glory for ourselves," she continued. "It is for the sake of God, because God lives and we want to do everything for the glory of God and also for exalting God in our lives."
I can't help but feel as if I've been schooled by a messenger sent straight from God through a child who has the faith of a true disciple of Jesus.  The message is simple and fundamental; no embellishment and no distortion -- just the pure essence of the Word.  And that Word is not coming from some flashy, million-dollar, mega church that seats 5,000; or accompanied by a rock band and showy rhetoric -- but from a small trailer in a crowded refugee camp in the midst of horrendous Christian persecution.  Do we need any further proof that God speaks into the darkness of the world?
As I view the lukewarm status of the American Church, I am humbled by this child's faith.  We call ourselves Christians -- but are we living our lives for the glory of God?  Are all of our actions and our words for the purpose of exalting God?  I pray that we do not face the tests of this child and her family, or those who have already been martyred.  But if it is God's will, I pray that the Holy Spirit will guide me as He has Maryam... to speak the Gospel Message into the world and convey the peace that comes with such abundant faith.  Thank you, Maryam.  Once again, you have shown us the power of the love of God.  May He continue to use you to profess the Gospel, and may He bless you and keep you and your family safe.

Colossians 3:16   "Let the word of Christ dwell in you richly, teaching and admonishing one another in all wisdom, singing psalms and hymns and spiritual songs, with thankfulness in your hearts to God."