Space Aliens and The Demonic Agenda

I bet there's not an American alive who has not been exposed to the idea of aliens from outer space.  No matter your age, you've probably seen an episode or two of Lost In Space or Star Trek; or sat wide-eyed at the revelations of movies like War of the Worlds; 2001: A Space Odyssey; the Alien series; or Prometheus, just to name a few.
These examples of entertainment present different scenarios regarding the alien species ... a few are sweetly sentimental, like E.T., while others have scared us to death with their overt images of brutal and powerful adversaries who wish to conquer us, such as those in Starship Troopers.  But a new trend has intrigued me in recent years -- that of benevolent visitations by aliens from outer space who reveal that they wish to see Earth and its population free of war, and that they have actually been watching our evolvement from afar ... as our creators.  This line of reasoning has been shrewdly introduced on the popular series Ancient Aliens. 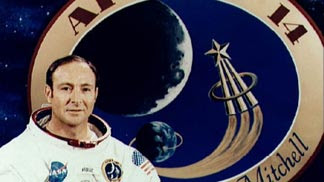 And now we have former astronaut Edgar Mitchell, who walked on the moon, announcing to the U.K. online website, Mirror, that sources within the space industry, along with military officials, have revealed to him that space aliens "have been attempting [for years] to keep us from going to war and help create peace on Earth."  His opinion is nothing new, and this was, in fact, the exact storyline of the recent TV series "V".
Mitchell is on record as having spoken of U.S. missile bases being monitored by UFOs, as well as relating stories of missiles being disabled and even shot down by alien spacecraft.  But Nick Pope, a freelance British journalist, who was an employee at the British Government's Ministry of Defense, and responsible for investigating reports of UFO sightings, has this to say about the former astronaut's claims:  "Edgar Mitchell is an honourable and truthful man, who I've had the privilege of meeting... Clearly, because of who he is, he's had access to government, military and intelligence community personnel at the highest level, but because - quite understandably - he won't name his sources, we can't be certain these people were being straight with him, or indeed that they were privy to any classified information about UFOs."
Pope further stated, "the idea that peace-loving extraterrestrials are here to warn humanity about our destructive ways is popular with those who take a New Age view of the UFO phenomenon."  And that's where the convergence of space alien "myths", ancient texts, New Age religion, and Christianity takes place.
This blog post is by no means meant to be an exhaustive treatise on this subject.  I simply want to begin a dialogue on the similarities between the ancient Scripture of the Bible and today's superficially altered version of the original agenda, which is still in play.  I have made no secret of my acceptance of the literal translation of Genesis 6.  I believe that the "sons of God" who cohabited with human women to produce the giants (nephilim) of the day were fallen angels.  I base that interpretation on the fact that this view of Scripture was accepted as true by the early Church. In the first century A.D., Flavius Josephus in his Antiquities of the Jews (1:3:1) held the position that angels co-habited with women. Later authors such as Philo of Alexandria (early first century A.D.) also held this position as did many rabbinical authorities. The Genesis Apocryphon, among the Dead Sea Scrolls, states this angelic interpretation. Furthermore, many Christian interpreters also took this position. These include: Justin, Clement of Alexandria, Tertullian, Cyprian, and Ambrose.
Those who reject this angelic view do so by rejecting the historicity of the Bible, and they feel the angelic interpretation in Genesis 6 is an example of the myths that were common among people at that time.  Those, like me, who believe in the authenticity of the Bible, suggest that the later myths that arose concerning angels and women producing monstrous offspring may have been derived from the actual occurrence as recorded in Genesis.  It's kind of a question of what came first, the chicken or the egg? 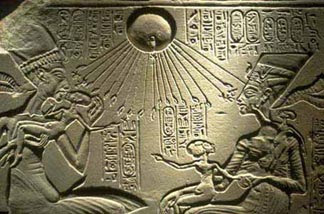 But for the sake of arguing the veracity of modern space aliens, we must consider if there is a connection to this ancient account of "fallen angels".  Could the stories be one and the same?  Could it all be part of Satan's evil agenda to lead man away from God by introducing not only new DNA that would corrupt our bodies and negate us as "images of God"; but also tempt us with an alternative origin --- one in which Satan suggests the theory of "panspermia"; that we are the products of some unknown ancient civilization that seeded our planet with life.  This theory is furthered by the notion that they have been observing us for thousands of years and are displeased with how we're treating not only the planet, but each other.   Therefore they will be returning soon to announce that they are mankind's true creator, and all the religions of the world are nothing more than man's pathetic attempt at explaining his existence.
This "directed panspermia" theory was created by a Nobel Prize winning molecular biologist, Francis Crick, and biochemist Leslie Orgel.  A brief summation of the 1973 Crick-Orgel theory of panspermia is stated in this way: "It now seems unlikely that extraterrestrial living organisms could have reached the Earth either as spores driven by the radiation pressure from another star or as living organisms imbedded in a meteorite. As an alternative to these nineteenth-century mechanisms, we have considered Directed Panspermia, the theory that organisms were deliberately transmitted to the Earth by intelligent beings on another planet. We conclude that it is possible that life reached the Earth in this way, but that the scientific evidence is inadequate at the present time to say anything about the probability."
Fast forward 42 years, as we see that their theory still has a life of its own in our secular society, as evidenced by the trendy popularity of Ancient Aliens.  But here's the thing ... there just may be enough truth sprinkled among the false narrative to lead many impressionable people astray.  They have twisted the story just enough to remove it from the Biblical narrative and to create their own similar story with a different ending.  Those who left their estate in Heaven (according to Genesis 6) to "seed" the earth with their own DNA fits both the Bible's account and the Ancient Alien story (as extraterrestrial living organisms deliberately transmitted to Earth to create life -- albeit not in the "image of God").
There is just enough symbiosis between the two theories that it will be easy for Satan when he appears as the Anti-Christ to say "you almost got it right ... but the god that you've been worshipping was the wrong creator.  I really orchestrated the whole thing with my faithful servants!  That Bible you've been reading is just a fairy tale.  Listen to all the evidence of your scientists and yes, your astronauts.  They have given you the proof that other planets exist and that there is life on those planets.  Your Bible is just a primitive and inaccurate interpretation of alien and UFO encounters.  Remember the tales told by Ezekiel of the four living creatures, and the turning "wheels"?  Those were really space aliens and my spacecraft."  Can you see how countless humans, both the easily-deceived young, and the weak-in-faith will fall for this deception?

You see, Satan is a master counterfeiter.  He will not sit by and watch God redeem His people without setting up a counter-narrative that promises "saviors" of mankind. But in order to pull off his deception, he must convince the human race that the Bible is inaccurate and our faith is without foundation.  He must find a way to encourage us to accept alternative ways to immortality and that perhaps life began on other planets, then evolved, and that space aliens are really our "brothers" or even .... our creators.  If he can get us to accept the possibility of space aliens, and that our religion has been misguided, then it's only a small matter of introducing a substitute global religion based on the occult, which will be presented as supernatural knowledge and experiences from our alien "ancestors".
I know this is hard for us strict, Bible-believing Christians to accept.  But I want you to know what your kids and grandkids are hearing through their songs, their video games, and their forms of entertainment.  I want you to see how the alien agenda is being woven into our secular culture and directly challenges our Christian religion.  Any similarity is embraced in order to give this demonic agenda credibility, while true Biblical teachings are mocked.  Sadly, the delusion is slowly becoming acceptable as legitimate scientific data.  After all, if NASA and a celebrated astronaut believe it, who are we to deny it?  So, take this as a cautionary piece of advice.  Be ready to debunk this popular theory and refute it with clear Scriptural evidence.  This UFO and space alien storyline is growing and gaining steam ... I don't doubt the existence of "inter-dimensional beings", but let's not play word games.  Why will the public acknowledge the existence of "aliens", but deny the plausibility of "angels" or "demons"?  It is time for those of us who know their true identity, and to whom they belong, to declare the Truth and expose the lies.