Heaven and Hell; Good and Evil

I often struggle with hearing what God wants me to write about, and today was no different.  There was so much news in the headlines ... the "apocalyptic" explosion in China; the fragile world economy; the devastation to the Animas River by the EPA; the continuing horror that is Planned Parenthood; the threat of violence around the world; and on and on.
But, for some reason, my mind kept coming back to the question, "What do people believe about Heaven and Hell?  How do they define Good and Evil?"  I finally decided that perhaps God wants us to consider where we stand on these issues, and why.  So I'm just going to let my thoughts take me where He wants to go...
I would venture to say that most people have an easier time imagining that there is a heaven, than they do that hell exists.  That only seems natural, doesn't it?  After all, the idea of a positive, happy place is much more appealing than one of pain and torment.  But first one has to decide if they believe that there is something beyond this earthly existence; that our life, or existence, so to speak, doesn't stop when we take our last breath and are no longer present in this world. 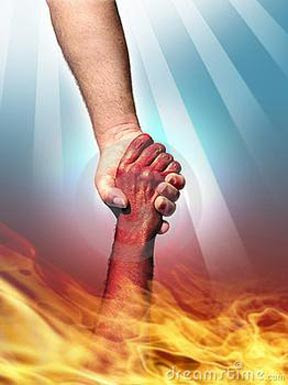 Romans 2:6-8   "He will render to each one according to his works: to those who by patience in well-doing seek for glory and honor and immortality, He will give eternal life; but for those who are self-seeking and do not obey the truth, but obey unrighteousness, there will be wrath and fury."