As It Was In The Days of Old... Our Evil Will Precede Our Fall!

Today's post may be hard to read, but I think it is absolutely necessary that we Christians face the sensational evidence of evil that is before our eyes.  I didn't think that the Planned Parenthood horror show could get any worse until I watched the fourth video released by the Center For Medical Progress.  I want to warn you, I was physically ill after watching it, and had to stop it before it finished, because it was just too hard to watch.  I hesitate to tell you to observe it, yet how can we turn away or ignore this evil?  What is our responsibility in making this known, and will it really make any difference?
I mean, we have the White House declaring that all the videos are fake; there are threats of a veto if Congress tries to defund the slaughterhouse that is Planned Parenthood; and you have the President of PP, Cecile Richards, proclaiming to ABC's George Stephanopoulos that "it is not a fee ... it is not a fee; it's actually just the cost of transmitting this material.  There are no financial benefits...".
Excuse me, Ms. Richards, but what you refer to as mere "material" is a baby!  And, in this fourth video, you have Dr. Ginde, a doctor in one of the biotech clinics that partners with you, saying quite clearly (as she dissects fetal body parts in a glass dish, "It's a baby."  And at the end of the video, she describes that sometimes during the second trimester abortions, the fetuses are so big, they can pull them out with their hands, so that they are "a little less war-torn".  But perhaps the most disturbing part (and which frankly, rocked my soul), was when the Medical Assistant is heard proclaiming in a triumphant voice, "Another boy!" 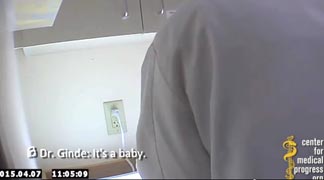 At this point I have to agree with my husband ... I know we are supposed to pray for these people, but God, forgive me, I want them to go straight to hell!  And I'm sure that other Christians are just as confounded as I am as to how we human beings have come so far in our evil ways.  In fact, during conversations with good friends, we find ourselves asking "Why?", and trying to come up with rational answers to explain why fetal parts are being sold.  Can it be justified for medical research? How can human beings not see the truth behind what they are doing?  And, for God's sake, can it really be true that fetal tissue is being sold to companies as flavor enhancers?
That claim is so nightmarish that people won't believe it until they read the evidence themselves.  And I understand that reluctance, because it is just too hard to wrap our brains around the fact that we are eating our young... yet that is, in essence what we are doing.  And the Bible records it happening in the Old Testament, and prophecies it for this Age!
As hard as it may be to fathom that cannibalism is mentioned in the Bible, it is!  Cannibalism is mentioned several times in Scripture; specifically, when referring to the prophecy about the siege of Samaria by the Assyrian army.  Perhaps the most descriptive of these prophecies is in Deuteronomy 28:53-57:  And you shall eat the fruit of your womb, the flesh of your sons and daughters, whom the Lord your God has given you, in the siege and in the distress with which your enemies shall distress you ... The most tender and refined woman among you, who would not venture to set the sole of her foot on the ground because she is so delicate and tender, will begrudge to the husband she embraces, to her son and to her daughter, her afterbirth that comes out from between her feet and her children whom she bears, because lacking everything she will eat them secretly, in the siege and in the distress with which your enemy shall distress you in your towns."  The prophecy had warned the people of Israel that their national disobedience to the commandments of God could reduce them to such a loathsome deed as cannibalism.
This portion of Scripture alludes to just such a time in Biblical history (2 Kings) when the northern kingdom had entered a season of rapid decline that mirrored its spiritual condition.  The tribes of Israel had turned away from their worship of YHWH to follow an apostate state religion and near complete moral degeneracy.  They had also made some unwise political alliances with Assyria that ultimately brought about their demise and their captivity and exile.  During this period of their history, the capital of Israel, Samaria, was attacked by the Assyrians and a siege ensued, which resulted in the fulfillment of the ancient prophecy.  And lest you think the prophecy was only for the ancient kingdom of Israel, note that the Scripture in Deuteronomy mentions TWO times that the mother will eat her young secretly ... in the siege and in the distress with which your enemy shall distress you...  Can you say for sure that the "distress" only happened in 721 B.C., and doesn't refer to a future time?
Because now here we are, in the same state of moral and spiritual decline, unwise political alliances, and national disobedience to our once Biblical foundation.  And guess what?  We, too, are cannibalizing our young!  How else can you describe it, when fetal parts are auctioned off to the highest bidder, which may include the maker of your favorite soft drink or that most popular of coffee drinks?  Let's face it, folks --- this 21st century cannibalism is the physical horror which is a manifestation of the spiritual horror of our apostasy.
But, remember, as I told you in my post, titled Forward March!... we must not curl up in defeat, lamenting that Satan has overrun our position in this world.  We must not give ground on this issue!  Planned Parenthood has been knocked back on their heels with the revelations coming forth from these videos... no matter how loudly they protest.  We must take a page from the Enemy's playbook.  They will try to keep saying the videos are fake, or heavily edited; but saying it won't make it so.  They will try to turn the tide of public opinion against the brave undercover investigators who are exposing their lies and wickedness.  Remember, there are more videos to come, with the promise that each one is worse than the one before.
So keep playing them and showing them to people.  Each time they say it is a lie, reply that it is the words of the PP doctors and biotech partners themselves that indict them.  Demand that our tax dollars not fund this evil organization!  Make our elected officials accountable!  And most of all, please pray and fight this battle in the spiritual realm!  The souls of those babies are crying out for God's Justice and perhaps for the first time, their voices are being heard through these videos.  Pray for the protection of the Center for Medical Progress and their ongoing efforts to expose this evil.  Together, we can be a formidable army against the spiritual forces of darkness that are being unmasked and forced into the light of public scrutiny.  And, we can rejoice that Jesus, the Light of the World, will not suffer this evil much longer!

Psalm 72:14    "From oppression and violence He redeems their life, and precious is their blood in His sight."