What Goes Around Comes Around

Let me tell you a story about the goodness of men.  In the months between the Kristallnacht Pogrom (The Night of Broken Glass) of November 9-10, 1938, and the start of World War II, nearly 10,000 children were sent, without their parents, out of Nazi Germany, Austria, Poland, and Czechoslovakia to safety in Great Britain. These children were saved by the Kindertransport rescue movement.  The government  of Great Britain eased immigration restrictions to allow Jewish children escaping from the Nazi atrocities to be allowed to enter the country as war refugees. 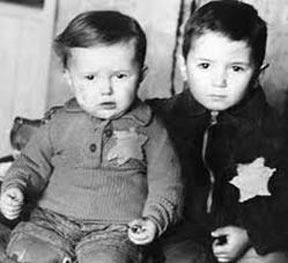 According to The Holocaust Encyclopedia, British authorities agreed to allow an unspecified number of children under the age of 17 to enter Great Britain from Germany and German-annexed territories (that is, Austria and the Czech lands). They were spurred by British public opinion and the persistent efforts of refugee aid committees.
The program, known as Kindertransport, brought its first refugees to Harwich, Great Britain, on December 2, 1938.  The transport brought some 200 children from a Jewish orphanage in Berlin which had been destroyed in the Kristallnacht pogrom. Most transports left by train from Berlin, Vienna, Prague, and other major cities in central Europe. Children from smaller towns and villages traveled from their homes to these collection points in order to join the transports.  Priority was given to homeless children, orphans, or those whose parents were already in concentration camps.
Private citizens or organizations had to guarantee payment for each child's care, education, and eventual emigration from Britain. In return, the British government agreed to allow unaccompanied refugee children to enter the country on temporary travel visas. It was understood at the time that when the “crisis was over,” the children would return to their families.  But most of the children never saw their parents again.  Parents or guardians could not accompany the children. The few infants included in the program were cared for by other children on their transport.
Children of the Kindertransport were dispersed to many parts of the British area. About half lived with foster families, the others in hostels, group homes, and farms in England, Scotland, Wales and Northern Ireland. Those older than fourteen, unless they were fortunate enough to be sponsored by individuals and sent to boarding schools or taken into foster care, were frequently absorbed into the country’s labor force after a few weeks of training, mainly in agriculture or domestic service. Some children older than that were even forced to work in the armies of those countries in the war. 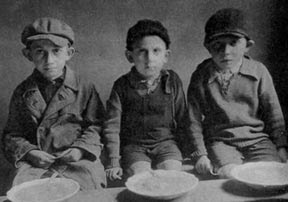 Children chosen for a Kindertransport convoy traveled by train to ports in Belgium and the Netherlands, from where they sailed to Harwich. At least one of the early transports left from the port of Hamburg in Germany.  Some children from Czechoslovakia were flown by plane directly to Britain. The last transport from Germany left on September 1, 1939, just as World War II began. The last transport from the Netherlands left for Britain on May 14, 1940, the same day that the Dutch army surrendered to German forces.
It wasn't always a positive experience for the children.  Some were overworked; some abused.  And in 1940, British authorities interned as enemy aliens about 1,000 children from the Kindertransport. They were held in internment camps on the Isle of Man, Canada, and Australia. Despite their classification as enemy aliens, some of the boys from the children's transport program later joined the British army and fought in the war against Germany.
Many children from the children's transport program became citizens of Great Britain, or emigrated to Israel, the United States, Canada, and Australia. Most of them would never again see their parents, who were murdered during the Holocaust.
Arthur George Weidenfeld, also known as Baron Weidenfeld, is a British publisher, philanthropist, and newspaper columnist.  He was also one of those children who was part of the Kindertransport.  He escaped from Nazi-occupied Austria through the help of Christians, and now this 95-year-old publishing mogul is returning the favor.   He has set up the Weidenfeld Safe Havens fund to support the rescue of up to 2,000 Christians from regions where ISIS is in control.
With the funding, Iraqi and Syrian Christians are being flown via private jet to Poland. Once safely in the country, Weidenfeld is funding their new lives for 12 to 18 months.  Weidenfeld told The London Times, “I had a debt to repay. It applies to so many young people who were on the Kindertransports. It was Quakers and other Christian denominations who brought those children to England. It was a very high-minded operation, and we Jews should also be thankful, and do something for the endangered Christians.” 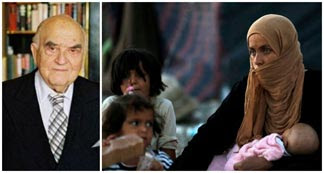 In this time of Christian persecution, when it seems as if the world has turned a blind eye and deaf ear, it is heartwarming to read of this success story... a Jewish child escapes one of the greatest evils this world has ever known, becoming affluent and thriving in a strange, new land.  And because he has the means to rescue others, just as he was rescued, he saves the lives of persecuted Christian children and their families.
The aim of Satan has not changed.  He is out to destroy the chosen people of God, along with those who have been grafted in as heirs of the Kingdom.  Seventy-five years ago, the Jews were the sole target.  Today, the Enemy has broadened his objective, and seeks to destroy those of us who are destined to share the Good News with the Jews.
But because the devil cannot quench the Holy Spirit, hearts are being moved and souls will be delivered.  Just a short time ago, Poland was home to six of the worst concentrations camps --- including Auschwitz-Birkenau, Belzec, Chelmno, Majdanek, Sobibor and Treblinka --- and was a country that symbolized death.  Today, it is a place where life is reaffirmed and victims of evil are rescued and delivered.  May the Lord bless and keep you, Mr. Weidenfeld, and the Lord make His face shine upon you, and be gracious to you; the Lord lift up His countenance upon you, and give you peace.  And on behalf of Christians around the world ... Thank you!

Thanks to the Kindertransport Association for their valuable information.