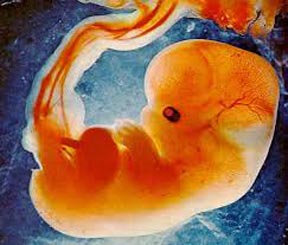 So, I guess Planned Parenthood wants us to feel that they and their patients have been violated by the videos that have been released.  I wish they would have given the same consideration to those precious fetuses.
And I'm sure I don't need to point out that there has been a conspicuous lack of coverage on the major media outlets, too.  Other than Fox News, have you seen any serious coverage on the despicable practices of PP?  Of course, you might have heard how CMP was deceitful in obtaining the video; how the videos were heavily edited; and the general unscrupulousness of the undercover project... but nothing about the convicting statements by the PP doctors and officials that fetal parts are, indeed, a valuable commodity.  The implication of the videos were obvious:  there's money to be made by selling the livers, hearts, and heads of murdered fetuses!  But here's the unspoken message: we (the media) must work together to minimize this story and move on to the next news cycle.  We need to focus the public's attention on something else until this blows over.
It didn't take them long to find their "something else".  As Breitbart.com reports, it's all over the news ... online news outlets, MSM, and every two-bit publicity source.  And here's the story that has the world worked up into a frenzy:  Cecil, supposedly, one of "Africa's most famous lions" was mistakenly shot during a purchased big game hunt by a dentist from Minnesota.  Now, paying thousands of dollars to hunt and collect trophies is not my thing, but it is legal in Africa.  However, this dentist claims that he was unaware that the lion had been lured out of a protected area until after the hunt.  He says that he relied on the expertise of his paid guides, who allegedly were responsible for the ruse. 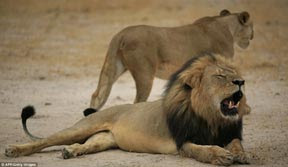 If it is proven that the dentist and/or his guides were unethical in their actions, and broke Zimbabwe's laws, then they should be prosecuted to the fullest extent.  But, frankly, I am astonished at the outcry of those who are encouraging death threats against the dentist.  Piers Morgan, writing for Britain's Daily Mail said he would pay for someone to help him track down the dentist, "skin him alive, cut his head from his neck, and take a bunch of photos of us all grinning inanely at his quivering flesh."
Late night talk show host Jimmy Kimmel actually cried on camera over the death of the famed lion, and wondered out loud if the dentist needed to kill a lion "to get an erection".  E! Online actually  called for the death of the dentist, in this thinly disguised threat: "if it were possible, we’d revoke his status as an actual human being…", while a fading actress tweeted that she would revoke his citizenship.  Actually, it's interesting what people will tweet about... I guess killing an unsuspecting lion in the wilds of Africa is a greater tragedy than killing an innocent young woman on a pier in San Francisco.  There were certainly no tweets about Kate Steinle's death from this same actress.
But I think it was PETA's statement (People For The Ethical Treatment of Animals) that has upset me the most.  They stated that if it is proven that the dentist committed a crime, he should be "extradited, charged and, preferably, hanged... To get a thrill at the cost of a life, this man gunned down a beloved lion, Cecil with a high-powered weapon. All wild animals are beloved by their own mates and infants, but to hunters like this overblown, over-privileged little man, who lack empathy, understanding and respect for living creatures, they are merely targets to kill, decapitate and hang up on a wall as a trophy. The photograph of this dentist, smiling over the corpse of another animal, who, like Cecil, wanted only to be left in peace, will disgust every caring soul in the world."
Well, here is what I would like to say to all these woefully foolish and deceived people:  I might give some credence to your words if only you showed the same outrage against Planned Parenthood.  I would like to restate PETA's charge against the choices made by the dentist and his hunting guides, and issue my own angry response towards those who support PP's activities.  By substituting Planned Parenthood's name in the diatribe, it would read something like this ... "To make money at the cost of a life, PP has encouraged the murder of millions of God's beloved creations, oftentimes in cruel and sadistic manners (think Kermit Gosnell).  All decent people love their mates and babies, but to immoral, unethical and shameless organizations and doctors like yourself, who lack empathy, understanding and respect for living creatures (which include fetuses), they are merely targets to kill, decapitate and make money off of.  The videos of Planned Parenthood, haggling over fetal body parts, who were once part of a living, growing, baby, should disgust every caring soul in the world."
Do you think it's possible that any of these misled people in the media and Hollywood will recognize the similarity in these two statements?  Sadly, I doubt it.  They will remain silent regarding the atrocities against unborn babies and the profiteering that goes on behind the scenes; at the same time they will become enraged over the dishonorable death of an animal a continent away.  We can expect that the full force of the media and a loud and lengthy social outcry will be exercised against this dentist -- while unborn fetuses will continue to be killed and sold without nary a glance at the wicked practice.  Does anyone else feel like we've crossed over into the Twilight Zone?

Ecclesiastes 12:14:       "For God will bring every deed into judgment, with every secret thing, whether good or evil."

Email ThisBlogThis!Share to TwitterShare to FacebookShare to Pinterest
Labels: Abortion, Media, Our Culture.