Why Did It Take So Long? 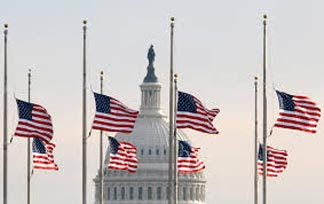 I join with the millions of Americans who grew frustrated with the slow response of Congress and the White House to lowering their flags to half-staff after the murder of four Marines and one Navy Sailor in Chattanooga last week.  Yesterday morning, Congress finally issued the proclamation to lower the flag at the US Capitol; and shortly before noon the White House followed suit -- five long days after the murders of these military servants!
I find it disturbing that within hours of the Navy Yard killings, the Boston Marathon murders, and the Newtown shooting, all federal flags were ordered to half-staff.  So what was so different about this tragedy?  Why did it take days to issue what should have been an immediate response? Oh, yeah, it meant that our government would be honoring our military with the respect and mourning period that they deserved.  I mean, for crying out loud, the White House ordered the flag lowered for Whitney Houston!  I recognize that she was talented, but what has she given the country in comparison to the service of these honorable men?
What has happened to the sensitivities and diplomacy of this nation?  The White House, which is supposed to be "The People's House", didn't have any trouble lighting up in the rainbow colors of the LGBT community after their Supreme Court win.  And the Empire State Building, which is symbolic of American individualism and the free-enterprise system, lights up in green to celebrate the end of the Islamic "holy" month of Ramadan -- just hours after the murder of the four Marines by a devout Muslim who texted a friend a verse from the Koran which included, "Whosoever shows enmity to a friend of Mine, then I have declared war against him."
It would have gone a long way towards telegraphing honor and sympathy for our armed services if the White House had lit up in the red, white, and blue; or the Empire State Building had shown some discretion instead of honoring the faith of a killer.  Did they stop to think how this would offend the families of the dead, or would add to the frustration of the American people ... or didn't either of them care?  Somehow, this fact has been overlooked: that Ramadan is the most violent month of the year in the Islamic world, because Ramadan is the month in which Muslims renew their devotion to Allah, and violent jihad is a supreme act of devotion to Allah.  Does anyone need to be reminded of the massive numbers of heinous beheadings, massacres, and shootings that happened during this "holy" month of this proclaimed religion of peace ... including the deaths of these American soldiers on our home soil???
But as disappointed and disheartened as I've been over the lack of respect shown these fallen heroes, I have been proud of the response of the American people themselves.  Governors of individual states followed Tennessee's lead and began lowering their flags at half-staff; choosing to act on their own in showing their respect and consideration for the families.  And I have to admit that I teared up a few times as the stories began appearing across the media spectrum of individual citizens showing up outside recruitment centers to exercise their Second Amendment rights and guard our unarmed military personnel.  The military's current policy of unarmed personnel on military installations must change! 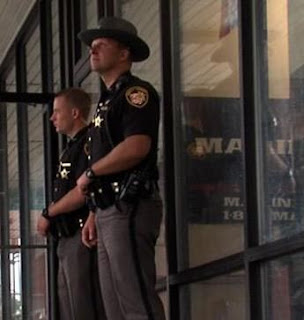 Time and again, across the country, Americans chose to take a stand and protect those who protect us.  Their locations may have varied, but their cause was the same throughout the land:  "Too many people have died for our freedoms.  I’ve never been in the military.  I never served as law enforcement, but I certainly am grateful for those men and women who have died in the past to secure those freedoms" (Virginia).  "To think [that] the people who are supposed to protect and serve us are unable to protect themselves ... So if we, the citizens, who carry legal permits, are able to help protect them, then that's what we're gonna do"  (Georgia).  "We're the third line of defense; the military, then law enforcement and then we, the people.  I just can't sit back and not let these guys be protected... If it takes the citizens to come together to arm these types of establishments, then we'll do so until the government steps up" (New Hampshire).  In Wayne County, Ohio, sheriff's deputies stood watch outside recruitment centers -- on their own time.  "We're here today on our own time. This isn't something that we are being compensated for, [we are here] simply as a way to show support for our service men."
Let's quit pretending.  Our government does not respect or honor our military.  The VA Hospital debacle (which has still not been remedied) proves that point.  The continued budget cuts and downgrading of our military defense options paints a clear picture.  The ranks of the military are being confounded with policies that promote homosexuality and transgenderism, while denouncing any display or action of Christian faith.  Just like the culture, God is being removed from the military, and the results will be devastating.
We can all try to put a happy face on this situation, but we know better.  It is up to each of us to bolster and support our military; to show them that there are millions of us who honor their personal sacrifice and their commitment to the Constitution and the ideals of this nation (what little is left of both).  We all know that the call has gone out across the terrorist social media outlets to attack our soldiers and military installations.  We must demand that our elected representatives take this threat seriously and allow our service men and women to protect themselves.  With each act of murder in the homeland, our enemy gets stronger and bolder.  The American people no longer accept delays and excuses from those who are supposed to "faithfully execute" their offices, and with "true faith and allegiance" defend the Constitution ... the enemy has breached the wall and our protectors are under attack.  Be the leaders you were elected to be!

1 Peter 2:19     "For this is a gracious thing, when, mindful of God, one endures sorrows while suffering unjustly."