As the second video exposing Planned Parenthood's involvement with selling fetal body parts surfaces, we can already see the battle lines being drawn... or not, as the case may be.  While most Americans are horrified by the negotiations revealed in the two videos that have been released, did you happen to notice that most of the mainstream media actually ignored the scandal?
The undercover video by the Center for Medical Progress was only covered on Fox News, while ABC's This Week, CBS's Face the Nation, CNN's State of the Union and NBC's Meet the Press all ignored the hot story on their Sunday morning political talk shows.  What does that tell you?  More than likely, they received instructions from their political masters to steer clear of this shameful news story.
As Jeffrey Meyer, of NewsBusters, reported in his article, Brit Hume of Fox News actually hit the nail on the head when he said, "[the video] demonstrates a callousness toward the killing of a human life that is, I think, a product of the abortion culture and where it has taken us. That was true also of Gosnell to an even more revolting extent. And I think that's the problem. It raises a deeper moral question about where all this is taking us.”  (You will recall that Dr. Kermit Gosnell was an abortion physician convicted of murdering three infants who were born alive during attempted abortion procedures.)
And I think Hume's question is so valid ... where is the abortion culture taking us?  Can you see that in the 42 years, since the Supreme Court decision made Roe v. Wade the law of the land, just how much we have devalued a human life?  Since 1973, when abortion became legal, there has been much effort to remove the stigma that a baby is actually being killed during the procedure.  As long as the abortion took place in the first trimester, the baby could be referred to as "tissue" or "cells". 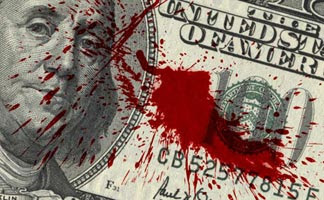 Then on the 20th anniversary of Roe v. Wade, President Bill Clinton wrote an Executive Order that removed restrictions on abortions, which allowed "fetal tissue research".  Of course, proponents and scientists cheered loudly as they proclaimed that fetal tissue held the possibility of benefiting patients with Parkinson's disease, Alzheimer's disease, diabetes, Huntington's disease, spinal cord injuries and other conditions. But it also made fetal tissue a marketable commodity for research organizations, and we took another step away from the recognition that this tissue was once a baby.
Now, here we are another twenty odd years later, and there are advocates for late-term abortions (up to 24 weeks), and we find that fetal body parts are actually being sold to the highest bidder.  We have slid so far down the ethical and decency ladder that I'm not sure we can ever recover moral ground.
The medical director of the controversial organization Planned Parenthood is seen and heard on the second damning video discussing the use of "a less crunchy technique to get more specimens", and joking about bumping up prices because she "wants a Lamborghini".  The sense that this is a baby we are talking about is completely absent. How have we become so morally vacant?
Planned Parenthood, of course, will once again say that the video is heavily edited, and that the procurement of fetal tissue is not against the law.  And there will be writers like Time Magazine's Alice Parks, who says in her article Why We Still Need Fetal Tissue Research, "The National Institutes of Health spent $76 million on fetal research in 2014, and fetal tissue has contributed to vaccines for polio, rubella and chicken pox. While recent efforts to transplant fetal tissue to treat conditions like Parkinson’s haven’t been as consistently successful, it’s still critical to scientific progress."  Excuse me ... do they want us to believe that polio, rubella, and chicken pox still require millions of dollars of research to eradicate?  I thought those diseases were controlled long ago.  And I ask you, how is it "progress" to diminish the existence of a baby to sellable body parts?
Then there is Planned Parenthood’s president Cecile Richards, who defends Planned Parenthood's "donation programs" that are supported by "Women and families [who are] committed to life-saving research ... And [that] should be respected, not attacked."  I'm sorry, but the word "respect" is not one that I can attribute to anyone involved in this decision and this practice.
But what do we do about the companies and organizations that contribute millions of dollars to Planned Parenthood; and who are complicit in the marketing of fetal tissue and body parts?  There are 41 corporations and organizations that directly contribute to the group.  Would you like to know who they are?  Some will surprise you; others won't.  They are, in alphabetical order: Adobe, American Cancer Society, American Express, AT&T, Avon, Bank of America, Bath & Body Works, Ben & Jerry’s, Clorox, Coca-Cola, Converse, Deutsche Bank, Dockers, Energizer, Expedia, ExxonMobil, Fannie Mae, Ford, Groupon, Intuit, Johnson & Johnson, La Senza, Levi Strauss, Liberty Mutual, Macy’s, March of Dimes, Microsoft, Morgan Stanley, Nike, Oracle, PepsiCo, Pfizer, Progressive, Starbucks, Susan G. Komen, Tostitos, Unilever, United Way, Verizon, Wells Fargo, and Xerox.
In light of the revelation that fetal tissue is also used as "flavor enhancers" in products by Pepsi and Starbuck's popular DoubleShot and Frappacino drinks, it makes you wonder what benefits the other corporations are receiving by supporting the evil deeds of Planned Parenthood.
We may soon know, because the Center for Medical Progress has promised a new video each week as they produce new evidence and confessions from Planned Parenthood operatives.  No matter how much those who champion the organization applaud their efforts to advance medical research, no one should deny the callousness and the disregard for human life that is exhibited in these filmed exposés.
The Spirit within me is crying out for justice for these innocent babies who have been reduced to "parts for dollars".  I can imagine them pleading before God in His throne room to defend them and exact His justice on their behalf; all 56 million-plus of them who have suffered this degradation.  Our moral decline is on full view before God and the world, and it's only going to get worse as more videos are released.  May our Lord have mercy on this nation!

To read more from the NewsBuster reports on this scandal, please click here and here.

Isaiah 26:21    "For behold, the Lord is coming out from His place to punish the inhabitants of the earth for their iniquity, and the earth will disclose the blood shed on it, and will no more cover its slain."