As Go The Universities, So Goes The Culture

I know by the comments that I receive on my blog posts, that my audience consists largely of "seasoned" men and women; mostly Christian in faith.  We have all lived enough years to have seen the dramatic changes in our country and culture.  And if you are like me, you have a healthy concern over where the future generations will take this nation, once founded on Biblical faith and principles.
We all recognize that our system of higher education (through our universities) is where the dissemination of ideas occurs, and most often influences the thinking processes of our young adults, which in turn directs the culture.
I have recently become fascinated with an organization called Ratio Christi (Latin for the "Reason of Christ"), which is a global movement that equips university students and faculty to give historical, philosophical, and scientific reasons for following Jesus Christ.  In other words, as in the movie God's Not Dead, Ratio Christi uses Christian apologetics to engage the university culture in sincere and respectful discussion in order to advance the gospel, rather than retreat from it in the overall societal culture. 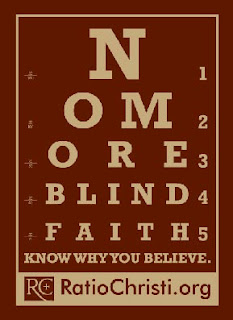 Ratio Christi is planting student-led apologetics clubs at universities around the world.  Students, engaged in the battle for the mind, learn to defend God's existence, the reliability of the Bible, and the fact of Christ’s resurrection. Their motto is "We seek a Renaissance of Christian Thinking in the University."
If you're like me, your initial thought was probably, "Good luck with that!"  But Ratio Christi is approaching their mission in a unique manner.  Noting that Christian ministries on college campuses are a diminishing reality, and often bear no fruit, Ratio Christi emphasizes engaging professors as well as students.  Rather than shying away from the Christian perspective on campuses, the organization partners with speakers that have academic reputations to sufficiently impress secular professors.  This allows their Christian worldview to compete with the worldview of non-Christian professors in an academic setting, and in a way that the secular professors can identify with.
Ratio Christi's student-led apologetics clubs are led by students who have had the tenacity to do the necessary research in order to defend their faith.  In turn, this determination gives them the opportunity to help others; those who have felt ill-equipped to deal with the secular tidal wave on campus.
Of course, it is to be expected that Ratio Christi's clubs are not welcomed with open arms.  Like many other Christian ministries across the country, they have been de-recognized and kicked off some campuses.  But they continue to meet privately, because they feel they can still have an impact on campus --- they don't need the university "stamp of approval" to influence the campus culture.
Ratio Christi is convinced that if they can teach college students how to defend the faith (with reasonable arguments) against the objections of their professors, they can reach those in the classroom, and possibly influence that particular course of study for the next 30 years.  Naturally, there will be those die-hard atheist professors who will never allow the free and reasonable discourse of faith in their classroom, but if free thinking is truly the hallmark of our universities, perhaps this approach stands a chance of influencing the educational culture.
In the end, maybe us older folks can learn something from these students.  Maybe it's time we become schooled in apologetics ourselves ... become not only engaged, but equipped to defend the faith.  The university setting is just a microcosm of our society.  Therefore, these students are engaged in meaningful discussions with Muslim students who want to discuss their faith.  Ratio Christi students know the importance of being settled in the truth of Christianity so that they can rationally defend our faith, instead of being carried away by the wind of opinion.  They have been schooled in the fact that faith and reason are not mutually exclusive.  I applaud this generation of Christians who recognize that now is the time to run towards the culture, instead of retreat in meek submission.  And it is truly humbling to read the testimonials of these students who are seriously committed to defending the knowledge of God.  When you see all the college campuses that are represented, it provides such hope and joy.  May the Holy Spirit empower them with supernatural influence!

1 Peter 3:15-16   "But in your hearts honor Christ the Lord as holy, always being prepared to make a defense to anyone who asks you for a reason for the hope that is in you; yet do it with gentleness and respect, having a good conscience, so that, when you are slandered, those who revile your good behavior in Christ may be put to shame."
Posted by Pam Kohler at 7:00 AM