The Iran Deal Is As Good As Done

You knew it before it was even public record, didn't you?  All the signs were there.  There was no real backbone in the spines of the Americans sitting at the negotiating table with Iran.  And the smile on Iranian President Rouhani revealed how easily they had achieved their aims of moving forward on his nation's capabilities to develop a nuclear bomb.
For the life of me, I am trying to figure out exactly why this was a good deal for me and the American people.  From my distinctively simple analysis, it would appear that Iran got the OK to proceed with their nuclear plans, while we received no real assurances that we or our ally Israel will not be the recipient of that advancement.  It's kind of hard to feel safe and secure when it looks as if all of Tehran is dancing in the street and shouting "Death to America."  It also does not reassure me when Reuters reports that Iranian Supreme Leader Ayatollah Ali Khamenei says "the nuclear deal with world powers did not signal any wider shift in Iran's relationship with Washington or its policies in the Middle East ... We have repeatedly said we don't negotiate with the U.S. on regional or international affairs; not even on bilateral issues. There are some exceptions like the nuclear program that we negotiated with the Americans to serve our interests."
Did you notice what I chose to italicize in that last sentence?  What exactly do you think is at the heart of those "interests" in the mind of the religious leader of The Islamic Republic which, by the way, is considered the preeminent state sponsor of terrorism in the world by the U.S. State Department?  As a religious leader, he probably views the events in the Middle East as part of an ongoing religious war; the Shi'ites versus the Sunnis. 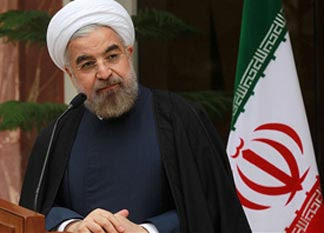 So it should come as no surprise that he says, "We will never stop supporting our friends in the region and the people of Palestine, Yemen, Syria, Iraq, Bahrain and Lebanon. Even after this deal our policy towards the arrogant U.S. will not change."  What I find interesting in this comment is that Iran is primarily Shia, while Palestine is Sunni.  Yemen and Lebanon appear to be about evenly dispersed between the two Muslim factions.  Syria looks to be mostly Sunni, and Bahrain is mostly Shia.  The conflict in Iraq is focused on the sectarian divide between the majority of Iraq's Muslims, who are Shia, and the Isis militants, who are Sunni.  So why would Khamenei call both warring factions of his faith his "friends"?
Once again from my limited understanding, I think it all goes back to the old axiom that we are all familiar with:  The enemy of my enemy is my friend.  Iran is willing to form a coalition with its traditional enemies in order to defeat its arch enemies in the region, Saudi Arabia and Israel.  And who is the biggest ally of these two Middle Eastern outcasts?  Why us, "The Great Satan", of course!  This is how, in 2011, Mohsen M. Milani, a Professor of Politics and Chair of the Department of Government and International Affairs at the University of South Florida in Tampa, explained the situation between Iran and Saudi Arabia:  "Iran and Saudi Arabia are neither natural allies nor natural enemies but natural rivals who have long competed as major oil producers and self-proclaimed defenders of Shia and Sunni Islam, respectively. Until the Iranian revolution in 1979, their rivalry was managed and controlled by the United States, with whom they were both strategic allies. But after the Shah was overthrown, Saudi Arabia’s leadership became frightened by the Ayatollah Khomenei’s denunciation of the Saudi monarchy as antithetical to Islam and his ambition to export the revolution to the Arab world. Saudi Arabia remained an ally of the United States; Iran became an implacable foe. Thereafter, the rivalry between Iran and Saudi Arabia became defined by the new U.S. strategy - ally with Saudi Arabia to offset Iran."
That has been our traditional approach to the Middle East situation.  But this new deal with Iran surely has to make not only Saudi Arabia nervous, but must especially heighten the protective instincts of Israel.  And can you blame them?  As part of the deal we negotiated alongside the five permanent members of the United Nations Security Council—(China, France, Russia, UK, U.S.—plus Germany), and the European Union, Iran will be relieved of the economic sanctions that served to keep their nuclear program in check.
In addition, Iran will soon be able to buy conventional arms because the arms embargo against them has been relaxed.   Iranian groups and individuals from terrorist-designated countries are now free to travel and do business around the world.  The Iranian nuclear program is also protected from sabotage by outside parties—meaning, pretty obviously, Israel.
Those who support this deal will tell us that if some kind of deal had not been struck, putting at least these weak time restraints on Iran, then they would have proceeded, unabated, and headlong towards a nuclear bomb and certain war in the region.  If that happened, then the U.S. would necessarily have to strike, causing Russia to most likely side with Iran and the possible onset of Armageddon.
I agree that it seems as if there was a no-win solution for the West.  But how does this agreement leave our ally, Israel?  At best, it is a huge gamble!  Does anyone really trust Iran to stick to, what seems to me, short timelines?  And now they are free to support and supply the other Middle East nations who hate Israel!  Haven't we laid out their path to the nuclear bomb?  And, as writer Jeffrey Goldberg has pointed out, "[haven't we] signaled to Iran’s leaders that they have a right—a previously unknown right in the vast catalogue of rights accorded to sovereign states—to enrich uranium, which is quite a thing to signal to a country designated by the United States as a committed and energetic sponsor of terror?"
In the end, I do not have the knowledge to figure out how this debacle will end -- only God knows.  But from this vantage point, it seems as if we have done more to "lose the dogs of war" than we have to maintain the peace of the region.  All I know is that this deal is likely to result in "wars and rumors of wars; nation rising against nation."  And what will the U.S. Congress do?  Sadly, Congress, will only be able to express approval or disapproval (with an up or down vote), and the president will have the ability to move forward by vetoing any resolution of disapproval. And it is next to impossible for those who disapprove of this deal to get the 13 votes they would need to override a veto.
However, with all that being said, the one thing I know for sure is that the God of Israel will not leave her defenseless.  Let men do what they will, our Sovereign God will work His plan for their national redemption.  Praise the Lord!

Malachi 3:6       For I the Lord do not change; therefore you, O children of Jacob, are not consumed.