The Price of Evil

I'm sorry if the photo enclosed in this post offends you, but I see no purpose in hiding the full impact of what this story reveals.  We've been hiding the extent of evil in our land too long!

I know that the foremost news on everyone's mind is the proposed "Iran deal", and I will have something to say about that in the coming days.  But today my heart is deeply saddened by the revelations from an undercover investigation of Planned Parenthood.  Breitbart.com has done an outstanding job on their extensive reporting on Planned Parenthood's sale of "intact fetal organs" harvested from abortions.
Take a moment and grasp the full implications of that statement.  There is actually a market for body parts of babies murdered during partial-birth abortions.  Think that is too strong of a statement? Just watch this video released by the Center for Medical Progress, the undercover organization that broke this story.  In it, you will see and hear Planned Parenthood’s Senior Director of Medical Services, Dr. Deborah Nucatola, discuss the aborted fetal parts which are harvested at their clinics (hearts, lungs, livers, lower extremities).  She also discloses the price range for such tissue, while admitting that both Planned Parenthood and the facilities purchasing the aborted fetal parts don't want to be perceived as selling and buying aborted babies.  Too late for that! 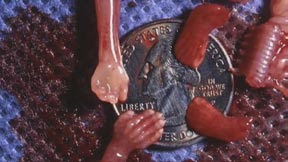 She then goes on to discuss how the abortion procedures are conducted in order to cause the least damage to what she refers to as "the specimens".  Her exact words are, "So then you're just kind of cognizant where you put your graspers; you try to intentionally go above and below the thorax, so that, you know, we've been very good at getting heart, lung, liver, because we know that, so I'm not gonna crush that part... I'm gonna basically crush below, I'm gonna crush above, and I'm gonna see if I can get it all intact."  She then goes on to discuss how dilation effects the delivery of the calvarium (that's the baby's head), and how the goal of the last step of the procedure is to "evacuate an intact calvarium at the end".
First, let me say, that it is disgusting to watch this monster feed her face and drink wine as she dispassionately describes the harvesting of God's creation for body parts.  Next, perhaps it helps her to sleep at night to refer to the clinical description of a precious baby's head as "the calvarium", but it does nothing to alleviate her evil intent.  She even seems to hint that although the Federal Partial Birth Abortion Ban is law, it can be circumvented because it is subject to interpretation, such as ... "If I say on day one, I do not intend to do this, what ultimately happens doesn't matter."  That's a perfect example of the moral relativism that is bringing about our national downfall.
Unbelievably, she goes on to answer the question asked by the undercover reporter (posing as a buyer of fetal tissue):  "What did you procure during your procedures yesterday at the clinic?" She reveals that she calmly looked at her case-load and knew from the list that the buyers had presented what they were looking for, so she plans her day accordingly.
Of course, Planned Parenthood has come out strongly denouncing the video, claiming it has been heavily edited, is taken out of context, is misleading, and blah, blah, blah.  And interestingly enough, PP has their affiliates across the country contract directly for the sale of body parts, so if the affiliate is exposed, they can take the fall for the parent organization.  Maybe it was the wine, but I couldn't believe how forthcoming she was with information; admitting that the ideal scenario would be to "find all the people who are doing this [buying fetal body parts] and present them with a menu." I can just imagine what that menu would look like .... a check-off list of how many hearts, livers, and lungs the procurement partner needs and by what date.  It's like a horror movie!  Only it is the reality of our world today.
If you have been a faithful reader of this blog from the beginning then you will recall my May, 2012 post on the diabolical doctrines and beliefs of Planned Parenthood founder Margaret Sanger.  Hailed as a heroine, I marvel at the ignorance of today's ardent feminists who don't have a clue as to her true philosophies.  Her motives had nothing to do with liberating women or women’s rights, she was a eugenicist — someone who believed that through abortion, birth control, and forced sterilization society could “assist the [human] race in the elimination of the unfit.”  Many of her philosophies were at the heart of Hitler's extermination plan for the Jews. 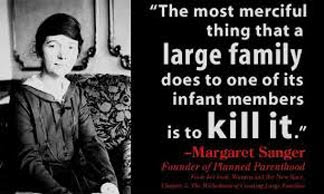 In a paper titled, Birth Control and Racial Betterment, Sanger made this comment, "We who advocate Birth Control, on the other hand, lay all our emphasis upon stopping not only the reproduction of the unfit but upon stopping all reproduction when there is not economic means of providing proper care for those who are born in health. The eugenist also believes that a woman should bear as many healthy children as possible as a duty to the state. We hold that the world is already over-populated. Eugenists imply or insist that a woman’s first duty is to the state; we contend that her duty to herself is her duty to the state."  Still think she was a champion of women's individual rights?
Regardless of how loud and angry Planned Parenthood becomes in denying this damning video, it is plain for all to see that they foresee a future in which fetal body parts are harvested to supply a thriving new financial market.  And if you can somehow overcome the shock and distaste of what they're doing, you have to ask yourself, "Who is buying these parts and what are they using them for?"  There are all kinds of scenarios (and hold on to your tin foil hats for these) .... this article will tell you they are being used as "flavor enhancers" in our food!  Is it possible that Transhumanists are in the market for fetal stem cells and organs to advance the branch of their frankenstein science called Rejuvenation?  And, if you are a Christian who views these days as the Biblical End Times, then whose to say that these fetal body parts aren't being using in demonic practices and sacrifices in the world of the occult?
The bottom line is this:  the very fact that this video exists is proof that partial birth abortion is not only endorsed by Planned Parenthood, but they see it as a marketable ancillary of their hellish organization.  And Dr. Deborah Nucatola talks on camera about the future of this new market as if it is the natural evolution of Planned Parenthood's agenda.  It is sometimes too difficult to look upon the sins of modern mankind.  I cannot think of a better reason for our Lord and Savior to leave His domain in Heaven and come forth to exact His Judgment.  Lord, do not allow one more precious baby to be sacrificed in this wicked generation!

If you would like to read the full complement of Breitbart's exposé on Planned Parenthood and Margaret Sanger, please click on the links to each.

Nahum 1:3,6   "The Lord is slow to anger and great in power, and the Lord will by no means clear the guilty ... Who can stand before His indignation? Who can endure the heat of His anger? His wrath is poured out like fire, and the rocks are broken into pieces by Him."
Posted by Pam Kohler at 9:05 AM