I have watched with fascination over the past couple of weeks the frenzy that has erupted over removing monuments associated with the Civil War.  It began with an outcry over the Confederate flag, and quickly spread to statues and sculptures of Confederate generals that dot college campuses and public squares across the land.  But dissent has not been limited to the national protest against the pro-slavery South; it has grown to include our Founding Fathers and anyone who is associated with slavery, period.
As I've said before, I cannot fathom any rational human being approving of slavery or the slave trade today.  But we must be careful when it comes to erasing our history.  Because a practice was culturally accepted does not make it right, and yes, it should have been condemned as immoral and repugnant.  But to expunge it from the national conscience (and everything and everyone associated with it), only serves to whitewash and misinterpret its historical value. 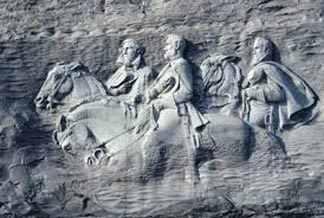 The latest monument to be subjected to scrutiny is what is known as the Stone Mountain carvings. It is the largest bas relief sculpture in the world.  The Confederate Memorial Carving depicts three Confederate leaders of the Civil War, President Jefferson Davis and Generals Robert E. Lee and Thomas J. "Stonewall" Jackson (and their favorite horses, "Blackjack", "Traveller", and "Little Sorrel", respectively). The entire carved surface measures 3 acres, about the size of two and a quarter football fields.
But now the NAACP has suggested that the historical depiction might be sand-blasted off the face of the mountain, in an effort to either bury America’s past or remove it from the history books altogether.  But the efforts of this and other politically correct police are not stopping with the seditious South.  There is even talk of removing Presidents Jefferson and Washington from Mount Rushmore because they owned slaves; of renaming the capitol of the U.S.; and wiping every reference to these historical figures from every courthouse, federal building, and memorial in the nation.
But we must ask ourselves why the headlong rush and fanaticism in accomplishing this goal?  Is it simply because of a tragic shooting in Charleston?  Or is there a larger agenda being met, and the powers that be can't lose this opportunity to rewrite history?
I found an interesting reference to a phenomenon known as "negationism" on Wikipedia:  Negationism, also known as historical revisionism, is conducted to influence a target's ideology or politics for a particular purpose. Revisionists understand Plato's dictum that, "those who tell the stories also hold the power".   James M. McPherson, former president of the American Historical Association, wrote that some would want revisionist history understood as, "a consciously falsified or distorted interpretation of the past to serve partisan or ideological purposes in the present".  Broadly understood, there are two motivations behind revisionist history: the ability to control ideological influence and to control political influence.
Either motive will do; it all comes down to power, as Plato prophesied.  But in the case of our nation's Founders, or the Civil War and its generals and heroes, we have current history books full of their exploits.  We also have courthouses and monuments and street names -- all reminders that these men existed and are part of our national identity.  But what if you wanted to eliminate that part of your identity; label it evil and dishonorable?  And by so doing, alienate and marginalize a portion of the populace in order to supplant their influence?
"They" are not interested in civil discourse.  No, it is time to strike swiftly and totally.  Disparage the reputations and memories of that part of our history and a new alliance can be formed; one that will bring power and prestige and prominence, with an emphasis on power. 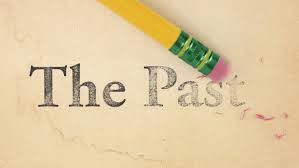 It should come as no surprise.  Down through the ages, ancient kings and monarchs covered up or destroyed monuments and records of previous rulers. For instance, this pattern of expunging earlier historical evidence can be repeatedly seen in Egyptian monuments and historical records.  Case in point: after the Hyksos rulers were expelled from Egypt, the Egyptians erased the records of that humiliating period so thoroughly that some of the names and the order of the Hyksos kings remain uncertain.
And so, it looks as if history is repeating itself.   We must also take into account that once we begin modifying history, it only takes one generation to permanently change the past.  Once all mention is removed from the school textbooks, and all evidence is wiped clean from our collective consciences, as far as contemporary archives prove, it all never existed.
How far will this attempt to revise and rewrite history go?  It remains to be seen.  But if we stand a chance of preserving our history -- both the good and sorrowful parts of it -- then we better take a stand immediately.  It is obvious there are those who wish to erase the significance and importance of the South from our national experience.  If this happens, then we can expect further eradication of anything that expresses our individualism, our self-expression, and our freedoms.
Our nation's past is a reminder of how far we've come; and it is strewn with litter and scars.  But it defines us as a people.  When we change our history or erase it, we lose a piece of our authentic self, and that is truly tragic.
I want to leave you with this quote by author Marcia Lynn McClure:  "Scars are but evidence of life ... Evidence of choices to be learned from ... evidence of wounds ... wounds inflicted of mistakes ... wounds we choose to allow the healing of.  We likewise choose to see them, that we may not make the same mistakes again."  I can't think of a better reason to leave our history alone.

Job 8:8-10    "For inquire, please, of bygone ages, and consider what the fathers have searched out. For we are but of yesterday and know nothing, for our days on earth are a shadow. Will they not teach you and tell you and utter words out of their understanding?"