The Global Economy: How's That Working For You?

I don't think we, here in America, really have a grasp on what is going on in Greece and China; let alone, what is going on in our own economy.  I know I don't.  Although I can sense that the world is being transformed through politics, social agendas, and economics, I can't quite connect the dots.  I know that we are being pushed towards a "global economy" ... we recognize that this term has been part of the political lexicon for some time now.  But what are the implications of a global economy?  What is the real agenda behind it?  All I know is that it is a complicated and perilous course we are on.
I've been reading more and more about what the Greek situation forecasts, as well as the headline on Drudge Report that China's stock market is tracking our own 1929 crash.  That can't be good!  And from my limited understanding of the Greek financial disaster, they are virtually in default on their national loans, and are being forced into a severe austerity program by the International Monetary Fund (IMF) and European Central Banks (ECB), which will result in pensions being cut (or lost altogether); welfare recipients suffering severe cutbacks; benefit packages for government workers will be sliced and diced ... all the programs that are the hallmark of Socialism.  This is what is coming to the global economic neighborhood near you.
The bottom line is this:  Greece can no longer support fat pensions, growing welfare rolls, and living beyond their means.  They can't afford it!  Yet the Greek citizens want to continue this lifestyle and loudly decry any measures of austerity that would stop the hemorrhage.  As Steven Moore, a notable U.S. economist, wrote, "Greece is now sitting on $350 billion of debt. It’s unpayable and the international monetary experts are deluding themselves if they believe that by some magic stroke this nation of 11 million citizens will sometime in the future come up with the funds to repay it.  Greece is already overtaxed, and adding more taxes on the few businesses that are still functioning is only going to ensure their eventual demise too. Meanwhile the Greek citizens have come to the conclusion that fat pensions and cradle-to-grave welfare benefits are a human right that can never be taken away. That is what they declared in the [recent] referendum. But those benefits are going to be lost. Socialism has radically reduced the standard of living of the citizens." 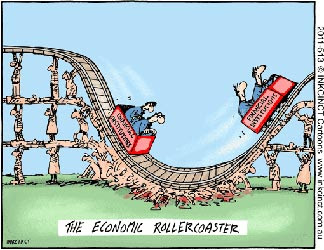 What I see is a fundamental flaw in not only Greece's financial situation, but that of every country and individual person who is living beyond their means and is in serious financial debt ... and that flaw is this:  Somehow they don't think they should be responsible for paying off their debt!  Moore makes a succinct point, when he says, "As part of the European Union, are the hard-working German citizens supposed to pay more taxes to pay for lavish benefits to Greek retirees?"  That's what can happen when you have a global economy!
But the bottom line and run-away debt is not the only factor that plays into the global economic equation.  The other side of the coin is national sovereignty.  As Ambrose Evans-Pritchard (an international economist who has covered world politics and economics for over 30 years) wrote in the U.K.'s Daily Telegraph, "The [European] creditors have sought to nail down the new memorandum by transferring Greek assets to 'an independent fund that will monetize the assets through privatizations and other means'. It will be used in part to pay off debts.  This fund will be under EU 'supervision'. The cosmetic niceties of sovereignty will be preserved by letting the Greek authorities manage its day-to-day affairs. Nobody is fooled."
He goes on to explain that there is no way that the Plan of Austerity can be successful; it will simply drive Greece further into spiraling debt as the country will be unable to meet its obligations.  And as Nobel Prize economist Paul Krugman points out, "What we’ve learned these past couple of weeks is that being a member of the Eurozone means that the creditors can destroy your economy if you step out of line. This has no bearing at all on the underlying economics of austerity... This goes beyond harsh, into pure vindictiveness, complete destruction of national sovereignty, and no hope of relief...".
So which is it?  Is a global economy something to be desired, and inevitable, as we are constantly told by politicians and the media?  Or is it a threat to national sovereignty and economic independence?  Or ... is it designed to do both?  True, it is hailed by nearly all world leaders as the inevitable future.  So, is this the plan?  The world is destined to be "connected" to each other economically -- meaning if one fails, we all suffer the economic fallout -- which will eventually lead to being "controlled" by a central economic organization that destroys all national sovereignty and independent financial systems.  Sound like I'm a crazy conspiracy nut?  Then read this quote from David Rockefeller, an indisputable global economist:  "This present window of opportunity, during which a truly peaceful and interdependent world order might be built, will not be open for too long — We are on the verge of a global transformation. All we need is the right major crisis and the nations will accept the New World Order."  Just consider China's plummeting economy, Greece's tremendous debt, and the latest threats against the cyber-security of our financial institutions.  If they don't qualify as crises, they will do until the mega-one comes along.
Here's my closing statement:  All of this is too complicated for the average citizen to figure out; and I believe that is on purpose.  Keep us confused; keep telling us globalization is the way to go; and continue with the secret back-room deals.  The one thing that seems clear to me is that the global economy is working for a select group of financiers that is controlling it --- they are getting richer while the common man keeps sliding down the economic ladder. The sovereignty of nations, and individual workers are all expendable.  Greece is in the vice now.  Who will be the next nation that feels the jaws of the global economy tightening around its throat?

Psalm 39:6   "Surely a man goes about as a shadow! Surely for nothing they are in turmoil; man heaps up wealth and does not know who will gather!"
Posted by Pam Kohler at 7:00 AM