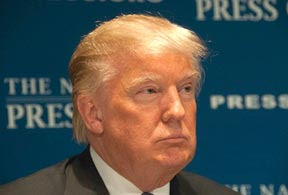 I usually don't like to get into the political debate spectrum of writing, but I have to admit it's been kind of fun watching the media circus surrounding Donald Trump.  First of all, you never know what kind of off-the-cuff (and cringe-worthy) remark he is going to make.  When all is said and done, I don't think he ever makes a statement in which he doesn't offend someone.  But, you know, that's kind of refreshing; and I think it is the key to his success in the polls.
No matter how much the talking heads try to spin it, they can't deny that he's proving popular with the American people.  And why is that, do you think?  Everybody from Rush Limbaugh to MSNBC is trying to dissect and terminate his appeal; and maybe it's as simple as he's not a politician and people are enjoying his frankness and candor, whether they agree with him or not.
I can only speak for myself, but I think the American people see Donald Trump as a possible champion of the shrinking Middle Class.  True, the other candidates all proclaim the same thing.  But only Donald Trump has the courage to cut through the politically correct nonsense and say what we in the heartland are really thinking ... illegal immigration IS hurting America; Common Core IS bad for our kids; climate change IS a hoax; and our foreign policy DOES seem designed to destroy America.
When he says that he wants to save his country, I actually believe him.  Now, can we expect that his businesses might profit from his economic policies to put Americans back to work?  He'd be a fool not to benefit, wouldn't he?  And would you really care if he added another million or two to his portfolio, if domestic manufacturing once again dominated the global economy, and the jobless rate in this country took a nosedive?
Just one day after he was ridiculed for saying "illegal immigrants are destroying the fabric of the country while the middle class is getting decimated", we had the horrific case of the Kathryn Steinle murder in San Francisco, committed by a 7-time illegal felon.  Now the whole country is talking about a situation that the administration, media, and politicians have tried to sweep under the rug.  Maybe Donald Trump's language is a little course; and certainly not every illegal immigrant is a felon, but he has managed to shine the spotlight on the issue, while others have tried to keep us in the dark.
And I am finally glad to hear someone make a real case against Common Core; someone who isn't afraid to ask, "Do you want Washington, D.C. educating your kids?"  Like many Americans, Trump believes in state and local control ... whether it be taxes, infrastructure, or school curriculum.
I think Americans applaud his common sense approach to issues.  He may not seem particularly "statesman-like", but maybe we're just a little tired of having everything forced down our throats by the political machine.  Take his stance on the vaccine controversy, for instance.  Rather than having to pick a side, either pro or con, Trump chooses to express his opinion that perhaps we don't need to advocate massive combined inoculations to small children, which he believes could be the cause for a big increase in autism.  He suggests spreading the shots over a long period, and watch the positive result.  He says, "What's the harm in that?  And I believe we will see autism rates go way down."  Doesn't that sound better than mandatory vaccinations?  Don't you think that you might get better cooperation from those on both sides of this issue?  Isn't it time for a little common sense on this topic?
There will be those who worry about his abilities and experience to militarily defend the homeland.  But, once again, I think his success as a businessman has shown us that he's smart enough to appoint the military experts he needs in order to get the job done.  Just watch one episode of The Celebrity Apprentice, and you know that he surrounds himself with the best of the best.
So, is Donald Trump a serious candidate?  I'm not too sure it really matters.  Because, as we all know, the candidate out front is just the puppet for the machine that really runs everything.  If he truly shows any staying power, watch for some kind of scandal to take him down.  The machine will not allow a free-thinker to win; especially one who actually believes in the Constitution, the 2nd Amendment, traditional marriage, and the exceptionalism of America.  So, enjoy The Donald while you can.  Trump is showing us that we don't have to settle for the pre-chosen candidate; and, if nothing else, he is a refreshing change from the stereotypical politician.  And pray that God will use him to wake up more Americans to what the country could be and should be.  After all, God has used stranger people to ensure His purpose ...

Proverbs 8:1-5    Does not wisdom call?  Does not understanding raise her voice? On the heights beside the way, at the crossroads she takes her stand; beside the gates in front of the town, at the entrance of the portals she cries aloud: “To you, O men, I call, and my cry is to the children of man. O simple ones, learn prudence; O fools, learn sense.