You know, it has been so easy to take God for granted as we live, in what I believe, is the most blessed country in all of modern history.  We have lived in a land that has, for the most part, only known prosperity.  And during those hard economic times, we were still flourishing when compared to the rest of the world.  But let's face it ... we felt we didn't have to protect those blessings; they just seemed to flow from the magnanimous hand of God.  Let's face it ... we not only took His grace for granted; we abused His faithfulness and have treated His commandments so shabbily. 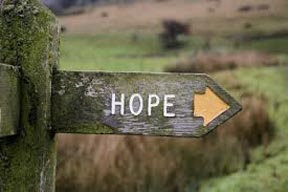 I will admit that the last couple of weeks I have felt little hope that this nation could turn back to God, but I am here to announce that there are signs of hope on the horizon.  Let me just run you through a few scenarios that have popped up on my radar in the last 24 hours ... the first is what I find amazing in a culture that worships celebrity and fame.  Seattle Seahawks quarterback Russell Wilson, an outspoken Christian and Super Bowl champion, recently revealed that he and his girlfriend, pop singer Ciara, have decided to wait until marriage to have sex.  But it is his explanation that makes me shout for joy, and gives me hope that God is still speaking into this generation.
“She was on tour; she was traveling, and I was looking at her in the mirror, I was sitting in the dressing room, she was getting ready to go…and she was sitting there, and God spoke to me and said, ‘I need you to lead her,’” Wilson recalled. “And I was like, ‘Really, right now?’…And he goes, ‘No, I want you and need you to lead her.’ So I told her right then and there, ‘What would you do if we took all of that extra stuff off the table and just did it Jesus’ way?’…And she was relieved.”  Now here is a young man who not only isn't afraid to go against what our culture promotes, but is man enough to say that he puts his obedience to Jesus ahead of his fleshly desires, and is willing to fulfill the role of leader, as God intended.
Next is a bit of hope that actually comes from the political scene.  In the midst of the controversy over the Confederate flag, South Caroline State Senator Lee Bright stepped up to the podium and spoke boldly about what he saw after the Supreme Court decision allowing gay marriage.  “Romans Chapter 1 is clear. The Bible is clear,” Bright cautioned. “This nation was founded by Judeo-Christian principles, and they are under assault by men in black robes who were not elected by you.”  He went on to say that the acceptance of gay marriage could mean that America is no longer a nation under God, but a “one nation gone under” — a reference to a 1984 speech from President Ronald Reagan during which Reagan said: ”Without God, there is a coarsening of the society. And without God, democracy will not and cannot long endure. If we ever forget that we’re one nation under God, then we will be a nation gone under.”  Bright continued his speech by declaring, “The devil is taking control of this land and we’re not stopping him."
Hope was also evident in the sermon, if you will, that Glenn Beck gave at a Texas megachurch:  “We are facing all kinds of trouble in our country and in the world. And we have talked about the soldiers that have protected this nation, but I want to spend a few minutes talking to you about our responsibility now to protect this nation,” Beck said. “We are the front line. We are the last line of defense, and if we fail, liberty will be lost.”  But how do we get there?  Beck said, "It is only through God that we will pull our family, and our nation out of the grasp and the jaws of hell, and bring it back to a Christ-centered nation where we need to be.”
Who are we as a nation, he asked.  “Who are we? Because most people don’t know. And what keeps us going? Most people, again, don’t know,” Beck continued. “We came here for a reason. We are a covenant nation. We’re the only ones besides the original state of Israel that made the covenant with God.”  Now, I will tell you that the millions of secular Americans won't like Beck saying we are a covenant nation, but it is the truth!  From the moment the Pilgrims landed on these shores, they dedicated this land to God, and the founding of this nation was credited to the "Providence of God" by the very men who fought to establish it.  Now, that sentiment is beginning to ring once again across the land.
Another state representative, this time from Oklahoma, is continuing his battle to keep a statue of the Ten Commandments on the state capitol grounds.  Although the Oklahoma Supreme Court ruled that the statue violates the state constitution, Representative Mike Ritze maintains that the monument is a historical necessity that provides context for all citizens regarding the emergence and crafting of American law.  “I like history, and I look at history and what we were teaching our children … we wanted to link them to as much as the original history — different facts that are being erased in our history,” he said. “In no way, shape or form did we want the monument to be a religious symbol. This is historical heritage of our birth as a nation and birth as a state.”
But, as I have mentioned before on this blog, the Satanic Temple, a New York group, has railed against the Ten Commandments display, and fought Ritze at every turn.  They even announced their own plans to place a satanist monument on capitol grounds in contrast to the Judeo-Christian-themed display. The group’s members have temporarily halted those plans in light of the Supreme Court decision, and will likely place the display in another state, which proves the point that they have an agenda to destroy Christian influence in this nation. 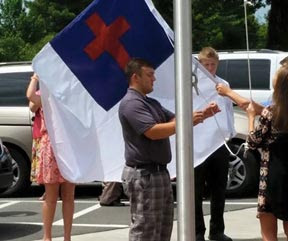 For now, it looks as if Representative Ritze has lost the battle, but as more people begin standing up for our faith, I think that the devil will find that his battle plan to go against the state is a lost cause.  In fact, two North Carolina pastors have decided to place a Christian flag above the American flag on poles outside of their churches — actions that they hope will inspire Americans to take a stand for their faith.  “As I was changing the rope [on the flags] one day, the Lord just laid on me that He is first and when He told me that, I switched the flags around," said Pastor Walter Wilson. The pastors want to make it clear that they will serve God before Government, and they are openly and enthusiastically encouraging others to publicly display their loyalty to our Sovereign God.
And finally, I found hope even in the sad story of the woman who posted a letter online to the father of her aborted baby.  What courage that must have taken, knowing that the feminist crowd would berate her, and there were sure to be negative responses from complete strangers.  Although she did not invoke God as part of her decision, the heartache and grief of her loss was expressed in her final words ... " I was convinced that I was right, and I didn’t need your opinion. And I’m sorry. I’m sorry that I didn’t talk to you because that life was half of you. I’m sorry that I didn’t confide in you and face my fears. I’m sorry that you didn’t get a chance to say goodbye… or even say hello. I’m sorry that you missed the opportunity to be a father. I’m sorry that you didn’t get a choice. But you never know… I may have saved you the endless thoughts, the deep-ridden regret, the aching emptiness as the due date draws near. I may have saved you the guilt of being free of that responsibility and pressure. I may have saved you the anger and fear. But I may have deprived you of one of the greatest joys in your life just as I have done to myself. And there are no words to explain how cruel and selfish I was in making that decision without you… there are no words to express an apology with the utmost sincerity. Please forgive me."
If that emotional post makes one woman stop and think before committing an act that she will regret, then there is hope that the tide is turning against abortion, which is so offensive to the God of all creation.
None of these events have taken the country by storm, and none are being shouted from the rooftops.  But all of them happening in one week gives me a spark of hope that people are awakening out of their doldrums and their easy acceptance of our culture.  I'm hoping those who call themselves Christians will stand up and defend the faith.  I'm hoping that every American will remove the scales from their eyes and see that the path we're on has changed direction ... we are no longer looking up towards that shining city on the hill, but are free-falling down into a pit of confusion and chaos.  So, forgive me for being optimistic -- even if it's short-lived.  Maybe there has always been these bursts of hope, and maybe it's just that I am needing them now more than ever.  I'm just so happy to see a little ray of sunshine in the middle of the darkness.

2 Corinthians 12:10   "For the sake of Christ, then, I am content with weaknesses, insults, hardships, persecutions, and calamities. For when I am weak, then I am strong."