The Legacy of Anne Frank 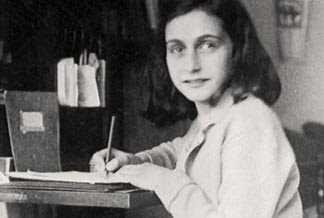 Seventy-three years ago today, a young Jewish girl receives an autograph book for her 13th birthday.  She decides to use it to record her thoughts of the chaos in her world.  That diary would become a defining icon of the manifestation of Evil to millions of people.  I received a copy of Anne Frank: The Dairy of a Young Girl on my thirteenth birthday and it has haunted me ever since.
As I contemplate the story of Anne Frank and her legacy, I am struck with obvious considerations as I juxtapose what happened during that historic time and what we are facing today.
For over two years, Anne and her family, along with four others, would hide in "The Secret Annex" above her father's business, in hopes of escaping the growing Nazi threat against Jews, which had driven them from their home in Germany in 1933.  They hoped to start a new life in the Netherlands, but on May 10, 1940, Germany attacked their new country. Five days later, the Netherlands officially surrendered.
For those who think that the fate of this country, or any other for that matter, cannot change in a matter of hours or days, I ask you to contemplate how quickly it was accomplished in 1940 -- without all the modern-day superiority of military power, or the option of shutting down electronic grids, and utilizing today's surveillance capabilities.
Would we, in this nation, put up a stronger fight than the neutrality-minded Dutch? How would we react if we saw an occupying force take over our country and begin to round up Jews, or Christians, or Muslims, or homosexuals, or anyone who fit their description of "undesirables"?  Would we see a similar collaboration among our citizens, such as happened when occupiers deported the majority of the Netherland's Jews to Nazi concentration camps, with the cooperation of the Dutch police and civil service?  Or would we be righteous and attempt to hide our neighbors, at great personal risk, such as those who hid and cared for Anne Frank and her family for two years?
It is not so hard to fathom in today's climate, that with the defeat of the Netherlands, the Nazis immediately passed anti-Jewish laws and edicts, and all hope that the Frank family might be able to leave the country were ended when the borders were closed.  Now, I ask you, if borders could be closed that easily and quickly and completely in the 1940s, what excuse do our politicians have today?  Unlike the Nazi's, who closed the borders to keep a tight control and order on the population, our borders remain open to ensure that destabilization within our country increases.
As I contemplate, in awe, the effects of a single young woman's thoughts during the most Evil time in modern history, I am struck by the power that one individual can have on the world.  Anne Frank dreamed of becoming a writer, and even hoped to have her diary published after the War.  But in her daily record of her hopes and fears; her ambitions and her apprehensions, she speaks for anyone who has faced the terror of simply trying to survive.  Through her short-lived life and legacy, we see how quickly hate can consume the world, and how easily Satan can tempt us to go along for the ride.
Consider these words of Lini Grol, a young Dutch girl who lived in the Netherlands during the Nazi occupation ... "In the beginning of the war, they tried to bribe us, more or less; tried to be friendly; trying to talk us into a 'good thing':  Hitler with one united Europe, all one big German Reich... Hitler had promised there would be work.  And indeed there was work, for those who worked with the Germans.  They would do that -- bribe us, more or less.  Then gradually they took everything away.  They took everything we had:  the newspapers, the radios --- and then there was no communication.  Everything was in Hitler's hands.  So they could more or less brainwash us and convince us that everything was fine."  The methodology hasn't changed much, has it?  We've just added the false promises of welfare to the insinuated threats of internet control, and you have the 21st century version of the Reich reincarnated as the New World Order.
Throughout the years since the end of WWII, there have been those who deny that the Holocaust was reality, and declare that the story of Anne Frank's diary is a forgery.  But the light cannot be held back by the darkness; the light that was Anne Frank's life resists the power of Evil, and her personal diary delivers a testimony of the abominations of men.
Her words survived the Holocaust for a reason.  And her tragic death in the Bergen-Belsen death camp could not stop the world from knowing that she existed.  It was 73 years ago today that an unknown 13-year-old Jewish girl would begin an archive that would make her world-famous and pierce the hearts of all moral people.  A few photos and a short video are all that remain of a likeness of Annelies Marie Frank.
Unbeknownst to her, she would become a published and celebrated author.  She has become a symbol of the millions of children that died in the Holocaust; a voice for the 6 million voiceless who were murdered by Evil personified.  She embodies the human spirit in the midst of horror and humiliation.
Buy the book for your daughter or grand-daughter.  Teach the Millennial generation that there is real danger in the world.  Teach them that one cannot concede moral or spiritual territory to the evil machinations of man.  Show them the difference that one voice can make, and above all else, let them know about Anne Frank and what she stands for; that she represents this important truth ... "The light shines in the darkness, and the darkness has not overcome it."

Psalm 83:1, 3:    "Keep not silence, O God; hold not Your peace or be still, O God ... They lay crafty schemes against Your people and consult together against Your hidden and precious ones."
Posted by Pam Kohler at 7:00 AM

Email ThisBlogThis!Share to TwitterShare to FacebookShare to Pinterest
Labels: Satan's Dominion, The Jews