Are We Giving Up Spiritual Territory? 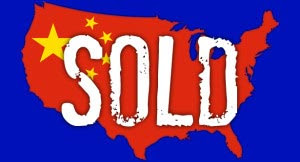 I will admit that I do not have the latest figures, but what I have learned about the large amounts of U.S. land owned by foreign countries and corporations has alarmed me.  Did you know that, according to the U.S. Department of Agriculture (USDA), foreign investors hold an interest in 25.7 million acres of U.S. agricultural land?  And that figure is from December, 2011!  I can imagine that this USDA figure has climbed significantly in the nearly four years since it was released.
A summary from the 2011 USDA report discloses the following:  Forest land accounted for 54 percent of all foreign held agricultural acreage, cropland for 19 percent, and pasture and other agricultural land for 27 percent. Foreign holdings of U.S. agricultural land were relatively steady from 2000 through 2006; between 2006 and 2007, there was a significant 3.6 million acre increase. Since 2008, there have been moderate increases each year ranging from 1.3 to 1.5 million acres. Between January 1, 2011 and December 31, 2011, there was an increase of 1,490,781 acres.
The state of Texas has the largest amount of foreign held U.S. agricultural land with 2,894,563 acres.  Maine has the second largest amount of foreign held agricultural acres with 2,877,965.  Washington has the third largest amount of foreign held agricultural land with 1,671,102 acres, which is 7.6 percent of its privately held agricultural land!  Sixteen percent of Maine’s privately held agricultural land is held by foreign investors; this is approximately 11 percent of the reported foreign held agricultural land in the United States.  Remember, these figures are nearly four years old, and we know that with the state of our economy, millions more acres have likely been sold.  I do not think it is exaggerating to suggest that foreign holdings in this country are increasing at an alarming rate.
How does it make you feel to know that when the Chinese purchased Smithfield Foods for $4.7 billion, they suddenly owned 460 large farms and became the top employer in dozens of communities all over the United States… or that Zhang Xin, CEO of Soho China , joined forces with the wealthy Safra family (of Banco Safra fame) of Brazil to buy a stake in the General Motors Building in New York City?  The New York Times reported last year that Dalian Wanda Group, another Chinese developer, is planning to build a greenfield luxury hotel in Manhattan.
Writer Michael Snyder shared the following information in a 2013 article: "The Chinese have made trillions of dollars flooding our shores with super cheap products, and now they are using some of that money to buy land and property all over America.  For example, there is now a proposal to construct a multibillion dollar “China City” that would span approximately 600 acres in a remote area of New York state.  This “China City” (that is actually what it would be called) would be located on Yankee Lake in Sullivan County, New York.  The plans anticipate large numbers of Chinese businesses, plenty of homes for Chinese immigrants, a Chinese high school, a college, a casino and even a theme park.  And the first 600 acres is only for “phase one” of the plan.  Ultimately, the goal is for “China City” to cover more than 2,000 acres.  Those promoting this plan say that it will be a great way for New Yorkers to learn to appreciate Chinese culture.  So should we be concerned that the Chinese want to place a little slice of communist China right in the heart of New York state?"
Then there are the reports of a recent outcry against California’s exports of water-rich products, like almonds and pistachios, to countries like China, in the midst of the state's historic drought.  Isn't that a poor use of domestic resources?  Is it really moral to enrich a Chinese corporation at the expense of U.S. citizens?  Is this a picture of the New Global Economy?
For me, as a Christian, these questions aren't simply a matter of political and economic consequences.  Yes, we have willingly sold our national heritage and agricultural lands to foreign investors, and I feel a certain sense of betrayal -- all in order to serve Mammon, the Biblical expression of greed and material wealth.  In fact, during the Middle Ages, Mammon was often personified as a deity, and sometimes included in the seven princes of Hell.
So, perhaps you are beginning to see my concern, and a greater significance to this "giveaway".  This nation, land, and its people were originally appointed by God to glorify Him.  And now with foreign intrusion, we have been exposed to foreign gods, and all the spirits that come with them.  Did not our God tell us how he felt about allowing this encroachment upon His territory?  "If you transgress the covenant of the Lord your God, which he commanded you, and go and serve other gods and bow down to them. Then the anger of the Lord will be kindled against you, and you shall perish quickly from off the good land that he has given to you.”  I don't know about you, but it couldn't be any plainer to me.
How we've forgotten that He gave this land to us!  And we have no idea how it offends Him to share this territory with foreign gods and their influences.  Now the question becomes how long will it take to "perish" off this good land?  Looks like we're well on the way.

Jeremiah 5:19   And when the people ask, 'Why has the LORD our God done all this to us?' you will tell them, 'As you have forsaken me and served foreign gods in your own land, so now you will serve foreigners in a land not your own.'