Why Is It So Difficult For Us To See?

I am constantly amazed at the ability of our culture to overlook or dismiss demonic activity in the evil acts of who we consider to be "ordinary citizens".  How else do you explain news stories such as the two that occurred within hours of each other last week?  There was the case of 30-year-old David Baril, who within a span of six hours, attacked four strangers in Manhattan with a claw hammer. 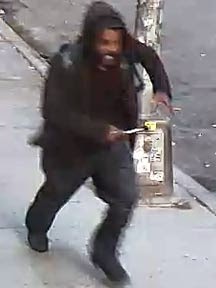 Mr. Baril was no stranger to assault, having eight prior arrests, including an assault on a police officer, and jumping a counter at a fast food restaurant to launch an attack.  After making eye contact with a young woman on a park bench, Baril took a silver hammer out of his bag and struck her, according to police.  In the most recent attacks last week, he approached a 20-year-old man in Herald Square, yelling profanities at the man before hitting him with the hammer, and then running off.
According to the local NBC affiliate in New York City, police believe Baril has been living in parks and subways since he voluntarily left a mental health facility, and frequented the area near Union Square, where he allegedly began his recent spree of assaults against the innocent victims.
So, as a society, we look upon this disturbed man with pity, fear, confusion, indifference, and yes, probably even disgust.  But have we considered that he is just the modern-day version of the Gadarene madman pictured in Matthew, Mark and Luke?  Think about it.  The Biblical madman is described as isolated and crazed; fierce and savage; as raising a cry from the depths of his throat.  In fact, Matthew mentions that there were two demoniacs, while Mark and Luke choose to mention just one of them.  But the fact remains that both the historical madman, and the modern one, are suffering from some kind of spiritual affliction.
In Jesus's day, they said he had "an unclean spirit".  The people of that day understood that a person could be controlled by, or afflicted by, a Satanically-influenced spirit ... a demon.  Today we use labels like paranoid, schizophrenic, co-dependent, dysfunctional... probably because we are so removed from the Biblical implications and don't want to consider anything that smacks of "God-related". But those terms are only different words for "unclean spirit".
Now consider the story, happening just hours apart from the incidents in Manhattan.  This time it is  happening across the country in California, where a knife-wielding woman stole an ambulance, and then crashed head-on into a semi-truck, killing herself and the big rig driver.  "There were no brakes, there was no swerving, nothing," said one witness.  So, anyone think this is just a normal occurrence, or a case of someone having a bad day?  Of course not!  There was obviously something terribly wrong going on inside that woman.  And I have seen no follow-up information regarding this strange and tragic accident.  Probably because very few want to consider the possibility that this woman was afflicted with demons. 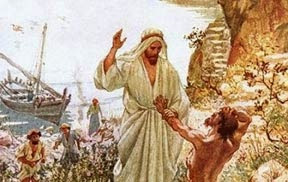 Why are we so afraid in Western culture to examine this possibility?  Doesn't it make sense that if it happened and was acknowledged in the Bible, that it could be just as real today?  Can anyone justify any reason that conditions could have changed in the last 2,000 years that would explain away the possibility of demon-plagued individuals?
I know there will be those who say that Christians cannot be demon-possessed.  That word "possessed" is a troublesome word.  Here's my understanding ... we are made up of soul, spirit, and physical body.  True, once we have received Christ as our Savior, our spirit is sealed by the Holy Spirit, and if we are obedient, we will be unable to be enticed by demonic spirits.  But our soul consists of our mind, emotions and will.  And obviously, our body is the physical temple of God.  There are many instances in the Bible of both soul and body being affected by "unclean spirits".
King Saul, after rebelling against the LORD, was troubled by an evil spirit.  There are several passages in the Bible that tell the story:  Now the Spirit of the Lord departed from Saul, and a harmful spirit from the Lord tormented him.  And Saul’s servants said to him, “Behold now, a harmful spirit from God is tormenting you. (1 Samuel 16:14-15).  Could it be any clearer?  The Holy Spirit departed from Saul, and God allowed a harmful spirit -- an unclean spirit -- to torment Saul.  So you can see that while the Spirit of God will not share residence with a demon, it can depart if we are willful and disobedient; leaving us open for demonic affliction.
Can you see that the mind of a man or woman could be afflicted or influenced by "unclean spirits" or demons?  I would not hesitate to conjecture that the minds of both the man in Manhattan and the woman in California were heavily controlled by demonic spirits -- nor the minds of the Aurora, CO theatre madman, or the Sandy Hook killer.  Furthermore, I can also give credence to the idea that our bodies can be impacted by spirits that wish to influence us and affect our relationship with our Creator.  The origins of alcoholism and drug dependency might easily be traced to demonic spirits attacking both our minds and bodies. 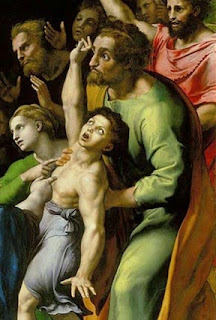 There are many instances in the Bible of demon-oppressed people being delivered from their afflictions:  the mute man in Matthew 9; the mute and blind man in Matthew 12;  the boy in Matthew 17 who was healed after the demon plaguing him was cast out;  the demon-oppressed daughter of the Gentile woman in Mark 7; the demon-possessed man in the synagogue in Luke 4;  and perhaps one of the most famous of them all in Luke 22:  Then Satan entered into Judas called Iscariot, who was of the number of the twelve.  The other clear instance of Satanic influence is found in Matthew 23:   But he turned and said to Peter, “Get behind me, Satan! You are a hindrance to me. For you are not setting your mind on the things of God, but on the things of man.”  Christ recognized that even Peter could be influenced by Satan!
So again, I ask, isn't it time that we in the 21st century come to terms with the fact that since the Garden of Eden, Satan has attempted to influence, afflict, and oppress mankind by attacking the minds, souls, and spirits of men?  But here is the condition by which this occurs ... Satan and his evil host can do nothing the Lord does not allow them to do.  Can we know and understand God's purpose in each and every instance?  No, and that makes it hard to figure out why we are seeing so many cases of evil and unexplained savagery in the actions of men.  But just because we can't understand it, there is no reason to discount the thousands of years that demonic influence has been at the center of such behavior -- nor to consider that God has a reason to allow it.  The one thing we can count on is that He is in control, and it will ultimately glorify Him.  In the meantime, it is paramount that we clearly see what we are dealing with, and remain obedient and in relationship with the Lord.  The Bible has shown us that as our society continues to abandon God, He will allow that vacuum to be filled by the Prince of this world.  While He will ultimately be glorified in all things, I can think of much better ways I'd like to see Him exalted.  We must repent and turn towards Him!

1 Timothy 4:1   "Now the Spirit expressly says that in later times some will depart from the faith by devoting themselves to deceitful spirits and teachings of demons,"