I rarely take note of it, but sometimes out of curiosity, I will decide to take a look at the native countries of my readers.  Through website analytics I am able to see from which countries readers originate.  The parameters run from who is reading that particular blog post now, or how many have read it today, during the week, the month, or the year; and finally, I am able to see which countries have read it the most during the lifetime of this website.  The numbers are often revealing.
The readership is pretty evenly distributed, with the majority coming from the United States, of course.  But there is always a minority of readers from United Kingdom, France, Germany, India, China, Malaysia, Poland, and Russia.  But I was shocked that consistently coming in at Number Two was the eastern European country of Ukraine.  Whether daily or all-time, Ukraine's numbers far outran those of other nations.  I had no idea, and wondered what the connection might possibly be between this website and the people of Ukraine.  After a fair amount of research, I may have a glint of understanding.  It is a complex situation in Ukraine, and I would love to get some feedback from those who are living in this tense situation.
In the meantime, the Christian world's attention is focused squarely on the Middle East and the persecution that is coming against Believers in Iran, Iraq, Syria, and Sub-Saharan Africa.  The torture and beheadings at the hands of ISIS are broadcast day after day on American news sites.
Far less known, but just as disturbing, are the persecutions of Christians in Ukraine.  Interestingly, politically disparate websites, such as NPR and The 700 Club, have both published reports that Evangelical Christians in Ukraine are under religious persecution by pro-Russian separatists.  (I must admit that there is conflicting information which states that while the persecution is real, nationalism and ethnicity have more to do with it than the anti-Christian aspect).  Indeed, persecution itself is defined as hostility based on race or political or religious beliefs.  Still, no less than The American Family News Network is also reporting anti-Christian violence in Ukraine.  Whatever the reasons, it is time the Western Church comes to the spiritual aid of our Ukrainian brethren. 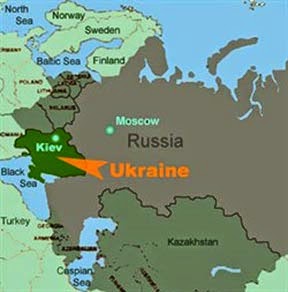 The history of Ukraine is fascinating!  A quick glance at Wikipedia's extensive file on the country reveals that "the territory of modern Ukraine has been inhabited since 32,000 BC. During the Middle Ages, the area was a key center of East Slavic culture, with the powerful state of Kievan Rus' forming the basis of Ukrainian identity. Following its fragmentation in the 13th century, the territory was contested, ruled and divided by a variety of powers, including Lithuania, Poland, the Ottoman Empire, Austro-Hungary, and Russia. A Cossack republic emerged and prospered during the 17th and 18th centuries, but Ukraine's territories remained divided until they were consolidated into a Soviet republic in the 20th century. It became independent in 1991 following the collapse of the Soviet Union."  The dominant religion in the country is the Orthodox Church, the eastern branch of Christianity.
According to the report by NPR, "Protestants from the separatist regions of eastern Ukraine say they are being persecuted by the Russian Orthodox Church. Many evangelicals have left because of a crackdown on religious freedom."  But from what I have read, it is my understanding that there is no real difference between the Orthodox Church in Ukraine and the Russian Orthodox Church, other than the ethnicity attached to it.  From the perspective of religious doctrine, they believe the same things.  The persecution is real, but nationalism appears to be the root cause.  (Again, I welcome the facts from those living in Ukraine).
But we cannot ignore the anti-God influence of the old Soviet Communist regime, nor dismiss the first-hand reports coming from International Christian Concern (ICC), an organization that "acts as a bridge between believers in free countries and believers in persecuted countries."  Less than a year ago, a spokesman for ICC said, "Just this week (August, 2014), four ... volunteers with the Far East Broadcasting Company in Ukraine, which broadcasts the gospel across that country, were pulled from their building.  And it was discovered that they were Christians, that they were believers – and they were actually beaten to death for their Christian faith when it was found out that they were evangelical Christians."
But this spokesman also reveals that "pro-Russian separatists are opposed to what they believe are immoral influences from the West and instead want fundamental Orthodox principles in Ukraine... They are suspicious of foreign or Western influences and they see evangelical Christians as a threat to the Orthodox faith," he explains. "That's one of the reasons why we've been seeing in the past few months evangelical Christians, Protestants, etcetera being targeted for violence and persecution."
It may be difficult for us here in America to fully understand the intricacies of hate and violence that exists in the Ukraine/Russia conflict.  But there is one thing that can be agreed upon:  The war in eastern Ukraine has driven nearly a million people from their homes.  Regardless of whether the conflict is centered around ultranationalism or religious differences, the truth is that Believers in Jesus Christ are suffering and their persecution is real and personal.  We should pray for the plight of Christians and refugees in Ukraine... and all around the world.

1 Peter 4:16    "Yet if anyone suffers as a Christian, let him not be ashamed, but let him glorify God in that Name."