The Immigrant Experience: Yesterday and Today

This is a topic that has been on my mind for several days, so I'm going to just jump in.  Immigration has been a hot button subject in our national conversation for some time, and is sure to be at the center of the Presidential election debates in the coming months.  For sure, it is quite controversial.  But immigration has been at the heart of the history of our great nation since the beginning, and has contributed immensely to our success. So I wanted to take a look at how and why our opinion of it today is so contentious.

We often look back on our history of immigration through the lens of nostalgia and view it in a sentimental light ... We are all familiar with poet Emma Lazarus's invitation engraved on the Statue of Liberty:  “Give me your tired, your poor, Your huddled masses yearning to breathe free, The wretched refuse of your teeming shore. Send these, the homeless, tempest-tossed, to me: I lift my lamp beside the golden door.”  Those words have inspired millions of people to make the dangerous journey to our shores.  I think it is important for us to recognize both the similarities and the differences in how immigration has impacted our nation. 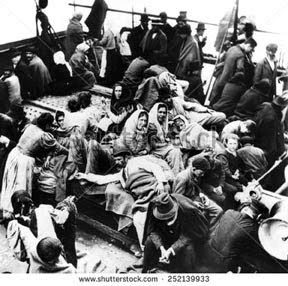 First the similarities:  The last great wave of immigrants to our country happened between the 1890s and 1920s and consisted primarily of Eastern Europeans.  Today's surge of immigration began in the 1960s and is still growing strong.  Most of these new immigrants hail from Mexico, and Central and South America.  Surprisingly, the percentage of foreign-born in the U.S. has not changed much in the last 100 years.  It was 13.6% in 1900 and 13% today.
Like the immigrants of the past, today's newcomers often enter the country with low skill levels, unable to speak English, and work at low-paying jobs and for long hours.  In both eras, the jobs often involved manual labor, or performing housekeeping duties and child-care for upwardly mobile Americans.
As in the past, today's immigrants usually live in ethnic neighborhoods, and due to their low economic level, multiple families may live together.  There are those today who will say that the immigrants of the past were viewed as "white", and more readily accepted.  But southern European Italian and eastern European Jew immigrants a century ago were not viewed as white in the same way that people with origins in northern and western Europe were; they were often called "mongrel" races.  They were discriminated against as inferior to natural-born Americans, as many are today.
Additionally, maintaining political, social, economic, and cultural ties to the home country is shared between the immigrant populations of yesterday and today.  Sending money back home and frequent trips to "the motherland" have been common for the last hundred years.
While realizing that the immigrant experience is much the same today as it was a century ago, there are some stark contrasts in the effect that immigration has had upon our country.  First of all, in 1910, there were 13.5 million immigrants in the U.S. – in 2010, there were a whopping 40 million!  In the past, there were few restrictions on immigration, and most people entered the country legally and without any prohibitions.  Today, many arrive or remain without proper documents. Estimates for 2011: 11.5 million undocumented immigrants ... and that was before the mass influx of people coming from Latin America the last two years!
One thing that we must understand when looking at the immigration "picture", is that 100 years ago, the population was about one fifth of what it is today.  And one cannot discount the words of Stephen Malanga, contributing editor to City Journal and a senior fellow at the Manhattan Institute:  "... Since the mid-1960s, America has welcomed nearly 30 million legal immigrants and received perhaps another 15 million illegals, numbers unprecedented in our history. These immigrants have picked our fruit, cleaned our homes, cut our grass, worked in our factories, and washed our cars. But they have also crowded into our hospital emergency rooms, schools, and government-subsidized aid programs, sparking a fierce debate about their contributions to our society and the costs they impose on it." We also cannot ignore the fact that these new immigrants often have their own values, customs, ideas, and culture, which are often at odds with our own; and they have no desire to compromise or assimilate as in generations past.  Our modern economy, which relies heavily on skills in the technology sector, makes it difficult for them to succeed without the necessary skills.  This makes it difficult to climb the economic ladder, and they often rely on something that immigrants of other generations didn't have: a bloated U.S. welfare and social-services bureaucracy that has greatly amplified the cost of immigration.
The immigrants of a century ago were Jewish tailors and seamstresses who helped create New York's garment industry, Italian stonemasons and bricklayers who helped build some of our greatest buildings, German merchants, shopkeepers, and artisans - who all brought important skills with them that fit easily into the American economy.  In fact, our economy was exploding, and these new workers, with their specialized skills, helped power our emerging economy.
The flood of immigrants we are experiencing today do not have those specialized skills, and at this time in our history, they are a mismatch with the state of our economy.  Even as we have made strides in welfare reform and had some success in weaning people off social programs, we are, at the same time, creating a new foreign-born underclass who become hopelessly dependent on government aid.  As famed free-market economist Milton Friedman puts it: "It's just obvious that you can't have free immigration and a welfare state."
I would be remiss if I did not mention an element associated with today's immigration debate.  This is a statement made in a 1992 article by Richard de Uriarte in The Phoenix Gazatte:  "An interesting aspect of the balkanization of America is the often playing of the "race card" whenever the discussion of illegal immigration comes up. According to most Latino advocacy groups, just being against illegal immigration is racist. This attitude is best expressed by Alfredo Gutierrez, political consultant, "We call things racism just to get attention. We reduce complicated problems to racism, not because it is racism, but because it works."
It is obvious that immigration is a complicated and emotional set of circumstances.  And as Christians, we are given clear instructions as to how we are to treat sojourners in our land.  It is one thing to help immigrants on an individual basis; quite another to meet the needs of 40,000,000.
So, as you can see, I haven't offered any viable solutions to our immigration policy debate.  To be honest, I'm not sure there are any -- as long as we have a federal policy that encourages immigrants to flock to our overcrowded nation with the promise of free social programs in a waning economy.  In truth, we are still the light that shines as a beacon to the tired, poor, homeless, and tempest-tossed that yearn to breathe free -- it's just that the golden door is tarnished and the lamp is fading.

Thanks to Professor Nancy Foner, of Hunter College and Graduate Center, City University of New York for statistics on immigration.