If you are like me, you eye each new announced candidacy for the President of the United States with suspicion.  The latest self-proclaimed "Savior" of our nation is Kentucky Senator Rand Paul.  There was a time when all that he promised in his announcement speech would have resonated with me ...  He's for a government restrained by the Constitution.  He wants to eliminate the national debt that "threatens not just our economy, but our security".  He employed all the buzz words that used to ignite my patriotic soul ... privacy, opportunity, liberty, justice, and freedom.
He was bold in his willingness to actually name our foreign enemy as radical Islam; and he is a proponent of a national defense that is "unparalleled, undefeatable, and unencumbered by overseas nation-building" (there's a nod to his Libertarian base).  I am in total agreement with him when he says it angers him "to see mobs burning our flag and chanting 'Death to America' in countries that receive millions of dollars in foreign aid."
As a patriotic American, I find no fault in any of these statements.  I believe his stance on all these positions to be in alignment with my own.   But the positions that are important to me as a Christian stand above my nationalistic leanings.  I don't know -- maybe it's because I am so ready to be in God's system rather than this world's system ... [but since I am stuck here in the world], there are "issues" that are more important than the success of our economy or national defense.  And, on these positions, I heard nothing from the good Senator. 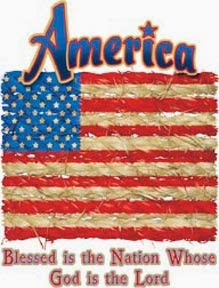 At the top of that list, I would like to know what his opinions would be, as President, on such issues as the Sanctity of Life; my freedom to worship my God; the preservation of the Biblical model of marriage and family; how he views the Nation of Israel; and it would have been nice to hear any kind of statement about his personal faith.  The answers to those questions will go a long way in determining if he is the man I wish to govern my nation.  Yet, he was silent on all these issues.  And perhaps, worse still, he is already dodging questions in the media on how he would regard exceptions to abortions.  All the "rah-rah America" speeches in the world amount to nothing if I do not know the man's heart on issues that matter to God.
In case you can't tell, I am longing more for my heavenly home, and becoming more cynical about this temporary residence on earth.  I see the hand-writing on the wall ... this Age of humanity is declining at a furious pace.  On one hand, we are racing to annihilate each other.  On the other hand, we are recklessly and rapidly seeking to become immortal by integrating what God made in His image with machines.  How can a political election really have any saving grace for us?
You see, for all the patriotic fervor that we will experience during the next two years, we Americans would be better off to concentrate on where we will spend our eternal citizenship.  Remember, if we call ourselves Christians, we are not of this world.  The problem is that our patriotism can become a pseudo-religion, and takes our eyes off God and our real role on this earth ... to bring others out of this world system and into relationship with Christ.
Yes, we must live in this world -- but not be "of the world".  And, yes, there will be a man elected to lead our nation in the fall of 2016.  Whether he will be a man that is pleasing to God, remains to be seen.  But I am discovering that my zeal as an American is being replaced with a passion to live my life as a citizen of the Kingdom of God.  Don't get me wrong -- I am still patriotic; I love my country. But in these days, I am more inclined to be a loyal-to-the-death defender of God's traditions and values.  And that is what I would love to see mirrored in my nation's leaders.