Do You Doubt My Authority?

Today my husband and I will be celebrating the last Sabbath of the Passover with a faithful group of Believers.  We will be presenting a historical view of the Exodus, and reading the Bible's account of the first Passover and its past, present, and future significance, both to practicing Jews and faithful Christians.  I say, "we", because I want to comment on a divisive issue within the Church and among some denominations.  I will be presenting a lesson prior to our Passover meal, while my husband will lead our group through a more formal ceremony of eating and prayer.  Together, we will lead our worship and observance.
I understand that to some, the fact that a woman has a leading role in such religious ceremonies, is troublesome.  Those who object will most likely refer to 1 Timothy 2:11-12:  A woman should learn in quietness and full submission. I do not permit a woman to teach or to assume authority over a man; she must be quiet.  Because men were part of our gathering, some would find my role objectionable.
By the way, this is the only verse within the entire Bible that I can find that speaks to a woman not having the authority to teach men.  So, without a confirming witness, I decided to take a deeper look at this conflict and see within what context the Apostle Paul made this statement.
As always, I find that our English translations of the Bible leave something to be desired when comparing them to the original Hebrew and Greek manuscripts.  Such is the case with the central word in the argument against women leading men in instruction ... it's the word, authority.  It seems that a study of Paul’s letters shows that he regularly used a form of the Greek word “exousia” when referring to the use of authority in the church.  But in this particular verse, Paul used the word "authentein".  This unusual Greek verb is found only once in scripture and rarely in extrabiblical texts, where it is usually associated with aggression.  Authentein is translated as “domineer” in the Latin Vulgate and New English Bible and as “usurp authority” in the Geneva and King James Bibles. 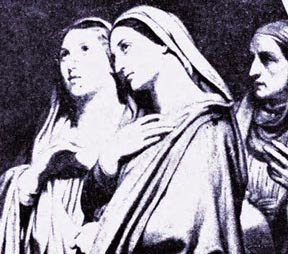 For a more comprehensive look at the ancient Gnostic teachings, false doctrines, and translation errors that contributed to our confused understanding of 1 Timothy 2, please click here.  My thanks to Bob Edwards for his outstanding research and commentary.

Email ThisBlogThis!Share to TwitterShare to FacebookShare to Pinterest
Labels: The Bible, The Church