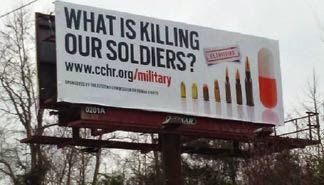 While taking a little day journey earlier this week, I was struck by this billboard along Interstate 35 in the heart of Texas.  Like most alert Americans, I am aware of the massive amounts of prescription drugs that our returning vets are receiving via the Military hospitals and the VA.  Through my service to wounded soldiers at Fort Sam Houston in San Antonio, I had heard multiple comments about the amount of drugs and the length of time they were prescribed for the patients.  In fact, more than one soldier told me he just stopped taking them, because "they messed with my head too much."
So, besides being tuned in to the potential problem with over-medication of our soldiers, I also wondered exactly who the organization was that was sponsoring these billboards.  Apparently they are appearing around the country near major military installations, such as Fort Hood in Texas and Fort Bragg in North Caroline, among others.  So I decided to do a little research.  At the bottom of the billboard, it says that the ad campaign is "sponsored by the Citizens Commission On Human Rights."  The website for CCHR says that they are a "Watchdog investigating and exposing psychiatric human rights violations."
Digging a little deeper, it didn't take long to uncover the alleged identity of this group.  According to an article at Examiner.com, CCHR "has been described by critics as a Scientology front group that campaigns against Big Pharma, psychiatry and psychiatrists."  If you remember a few years back, the most famous Scientologist, Tom Cruise, got into a heated debate with actress Brooke Shields over medication she took to help alleviate symptoms caused by her postpartum depression.
Scientology insists that mental illness is not a medical disease and that the use of psychiatric medication is a destructive and fraudulent practice. The organization goes so far as to link psychiatry or psychiatrists to school shootings, eugenics, and terrorism.
I admit that I have some conflict over the various positions taken on this subject.  I am not a fan of the cult-like religion called Scientology.  Yet, I cannot dispute CCHR's claims that "in early 2013, the official website of the United States Department of Defense announced the startling statistic that the number of military suicides in 2012 had far exceeded the total of those killed in battle—an average of nearly one a day. A month later came an even more sobering statistic from the U.S. Department of Veterans Affairs: veteran suicide was running at 22 a day—about 8000 a year."  And then there are those confirming statements I heard directly from soldiers saying that "too many drugs are being prescribed." And perhaps the most disturbing fallout of how we are treating returning veterans with PTSD, is evidenced in this 2014 story from International Business Times:  When former U.S. Army Specialist Kyle Wesolowski returned from Iraq in December 2010 following a brutal yearlong deployment, psychiatrists at the Fort Hood army post in Texas gave him “a cocktail of seven different drugs” for his anxiety, depression and other war-related mental health issues.
More than three years later, Wesolowski has come to an uncomfortable conclusion about the unintended consequences of ingesting those medications: They made him homicidal.
While desperately struggling to taper off the drugs without an exit strategy from his military doctors, Wesolowski contemplated murdering a young woman he met in a bar near the base. “When she talked to me, I put on a fake smile and tried to be nice,” Wesolowski said, though in reality he recalled hating her for being happy and carefree, and now says that due to the side effects of his drug cocktail, he felt violent urges. “I began to fantasize about killing her,” he said.
At this point, I think it is highly appropriate to ask, What are we doing to our soldiers?!?  Why are so many psychotropic drugs being prescribed, often in conjunction with other drugs that produce violent side effects?  Is it possible that, as some experts in the field suggest, "Congress is lobbied heavily by Big Pharma" ... and "Soon after the start of the second Gulf War, we saw a sea change in the prescribing of these [psychotropic] drugs to our troops. This cannot be accounted for by anything other than military decisions at the very top that were certainly influenced by the pharmaceutical industry, which markets from the top down, then the drugs flow to millions."
Certainly, this seems to be verified by an Austin American-Stateman report which found that drug purchases by the Department of Defense ballooned by more than 123 percent, from $3 billion in 2002 to $6.8 billion in 2011, which outpaced by nearly double the overall increase in reported pharmaceutical sales in the U.S!
While I was astounded (but not surprised) by the amount of drugs being prescribed, I was floored to read another article that reported the Pentagon funded nearly 2/3 of a million dollars to a Scientology De-Tox program to help soldiers get off the drugs.  But at what cost?  The program claims to flush out the accumulations of toxins stored in body fat by flushing out the toxins and excreting them from the skin using high/toxic doses of Niacin and other vitamin regimes.  Plus it is my understanding that soldiers enrolled in this program are subjected to Scientology's famous "auditing sessions", which attempt to tear people down in order to build them back up.  Not only am I leery of this cultic organization on religious grounds, but is that really a safe mechanism for soldiers who are dealing with PTSD?
So, I'm left feeling that our soldiers are being victimized from all sides!  Who is really looking after their welfare and that of their families?  It simply appears as if the DOD, Military Hospitals, Big Pharma and Scientology all have their own agendas, and the suffering soldier's needs are at the bottom of the list.  As a government and a nation, we should be ashamed!  Who will stand up for them?  Please pray that this insanity will stop!

Psalms 34:18   "The Lord is near to the brokenhearted and saves the crushed in spirit."