We're One Step Closer To The Edge 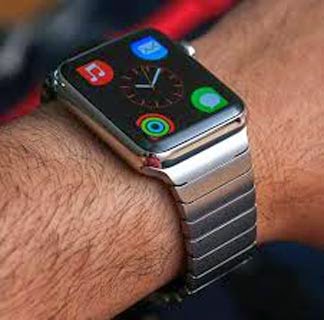 By now, I'm sure you've heard that Apple has 1,000,000 pre-orders for its newest technology apparatus, the Apple Watch.  The rate at which people signed up for the Watch far surpassed the launch of the iPhone in 2007 and the iPad in 2010.
Excuse me, while I refuse to get in line.  It amazes me that people (many of whom I consider quite intelligent) would so willingly expose themselves to "the plan".  What am I talking about?  For starters, let me show you the path that these "sheeple" are being led down.
Can you even remember what it was like before personal computers?  Do you remember thinking that you didn't really have much need for that clunky contraption, or that you couldn't imagine why you would need one?  So, how many of you are reading this blog on some form of that very same invention?  I mean, even our 70 and 80-year old parents have one sitting on their desk!
Next, do you remember any time before cell phones?  Did you even see it coming -- that we would one day be taking our computers with us everywhere?  Or did you ever think you would be glued to yours?  Well, that's how easy it has been to get us accustomed and addicted to our computers.  We can no longer conduct business without one, and if you want to communicate with anyone under the age of 25, you better have one.  Not only that, we get our news, pay our bills, and buy anything we want from this one small device.
And now we're ready for the next step, right?  The tech gurus have designed a way we can wear our technology on our arms; we no longer have to carry anything, we can wear it right on our person. And a million people can't wait!  It doesn't officially go on sale until this Friday, April 24th, but it's already a blockbuster.  And the Millennials will rush headlong for the nearest Apple Store!
So, if it's only been a little over 10 years since the push for "a personal computer in every home"; and only 8 years since the iPhone became a necessity; we can probably anticipate the rollout of your own personal computer IN you before the end of this decade ... don't you think?
And I predict that the lemmings will be just as eager to get in line for this as they have for everything else.  Why not?  With every new innovation, they have continued their impulsive collaboration with the mass movement of technology enthusiasts, and rushed headlong towards their own destruction.  They never question what the end game is, nor look up long enough to see where this all leads.
Faith seems to play no part in this mania.  Christians who would tell you that they are saved by the blood of Jesus cannot put their phones down long enough to sit through a Bible study.  What idols we have made of technology!  And they don't even recognize that they are enslaved to something that will soon call them to become ungodly.
Chip implantment is no longer undercover ... it is out in the open and the plan is to make it as commonplace as that computer sitting on every desk in America.  Yes, they will sell the Apple Watch as one more step towards making technology convenient.  It's the next step that you should fear; that's the step that will affect your mortal soul.  Will you get in line?

Psalm 135:15-18    "The idols of the nations are silver and gold, the work of human hands. They have mouths, but do not speak; they have eyes, but do not see; they have ears, but do not hear, nor is there any breath in their mouths. Those who make them become like them, so do all who trust in them!"

Email ThisBlogThis!Share to TwitterShare to FacebookShare to Pinterest
Labels: Our Culture., Technology