This week and last, memorials are being held among the survivors of the Nazi death camps.  In Israel, these days are marked under the banner of Holocaust Remembrance Day.  For those of us who read of the atrocities committed by one human being against another, it is difficult to escape the emotions that accompany the tragedy of millions of lives lost; all because they were born a Jew.
Our anger and tears and sympathy are displayed as we try to pay homage to those murdered, and we try to put ourselves in their place.  How would we have endured such blind hatred and evil?  Could we have survived it?  Are we even aware that the same unbridled hate is coming against Christians in the Middle East -- and will become a reality here at home?  Have we forgotten the lessons and the voices of history?
The truth is, none of us can come close to knowing how horrific it was.  We only have the words of the few remaining survivors to keep the truth alive; to repudiate the attempts to rewrite history.  We should pay attention and listen carefully.... 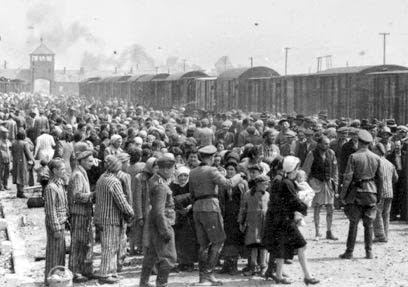 Last Friday, on April 16th, Noah Klieger and Rabbi Israel Meir Lau raised the flag of Israel at the March of the Living in Poland.  Noah was one of the few Jews who survived Auschwitz; Rabbi Lau was the youngest prisoner to be liberated from Buchenwald. Neither would have dared dream at the time that one day they would participate in a symbolic march in memory of the millions murdered by the Germans.
"The only dream that all the prisoners in the Jews' camps had was to live one day more than Adolf Hitler and survive the Reich of horrors he established. I was a prisoner at Auschwitz at the time, a nameless prisoner, with a number tattooed on my left arm. A prisoner without rights, whose life or death were determined by one SS officer or another.
Can an ordinary person imagine hundreds of people sitting side by side at the latrine, the building in which holes were dug in the ground every half a meter, holes in which we defecated, many of us suffering from serious dysentery. An ordinary person definitely can't imagine that, just like he can't imagine standing for hours in the parade yard at the end of a working day, when the SS officers find out that one prisoner has not returned (they counted us when we left and returned from work). As long as they didn’t find the missing prisoner, as long as they suspected that someone had managed to escape, they made us stand there for hours. With no other option, we relieved ourselves while standing up. In the extremely cold weather, the urine and feces froze on our bodies and thin pajamas we were wearing. In the summer, the stench made hundreds of us – maybe even thousands – faint." 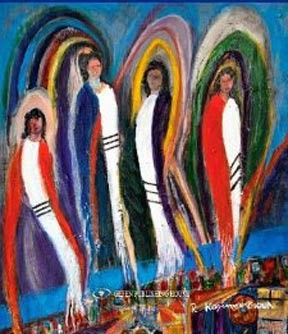 There is the story of 80-year-old Rita Kasimow Brown, a recognized Holocaust artist, who always painted herself in her portraits in white.  " I think it has to do with the little white, not-so-white nightgown that I survived the whole Holocaust in."  Rita was just seven years old when the Nazis invaded her hometown of Turmolt, Poland.  In 1941, the Nazis rounded up the Jews there and put them in a ghetto.
Rita's memories, like so many of the remaining survivors, are those of a child.  "What happened was we escaped the ghetto. We were hiding in all sorts of places, in barns, in bunkers, in all kinds of places with other people, but we got sick and had colds and then my father went away for a few days and what he did, he found another Christian family," she said.  "And there he dug a big pit under the stable and had a connection to the potato bin and a latch that you can open to the farmer's home," she recalled. "Now it was total darkness. We had a little light, from the cow shed, a little straw so there was a little light.  This is how we lived 20 months. We were hungry and fearful. It was just a living hell. It was a living grave," she said.
As they lay there, Rita's mother taught her songs that she knew from the very cultured life she had led in her birthplace of Vilna.  "We sat like this and prayed and tried to sleep," she said, clutching at her heart.  Being awake was a nightmare, she explained, hour by hour, suffering day and night.  Most of her father's 12 siblings died while her little family of five stayed alive.
"Being creative helped me survive and not only survive but keep my sanity," Rita said.  "I survived the Nazi murder machine, but the thing for us, the Nazi Holocaust survivors…we are wounded survivors."
The Holocaust has not only affected those who lived through it, but the following generations.  David Hershkoviz would hear his mother screaming in her sleep as she relived the agony: a German soldier separated her from her own mother, who died at Auschwitz.  Hershkoviz's mother died two years ago. But through a "second generation" study course in central Israel, he's keeping her story alive. The Shem Olam Holocaust Institute is educating people like Hershkoviz to tell their stories when the Holocaust survivors are gone. 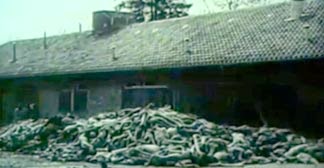 And how many Christians share the story of journalist Nancy Beasley, who ignored the story of the Holocaust for too long?  When her Editor forced her to cover a story on the tragedy, she could no longer avoid it.  "I ended up going to a Kristalnacht ceremony where I think I heard my heart break because the survivors were talking about their family members who did not live, and it just changed my life completely," she said.
"There was a woman named Raja Shlom and she witnessed the murder of her husband, her father and her father-in-law. And just moments before they were executed, she was talking to her husband. She'd taken some food [to him] and he said, 'Just save the boy, just save the boy,'" Beasley said.
With the help of a German guard who had been her student, Shlom escaped with her mother, sister and the little boy, whose name was Emanuel.  "And she would say to the farmers as she went through the countryside, 'Don't be afraid. My son's name is Emanuel. That means God is with us,'" she told CBN News.  Those farmers along the way, hid the family.  Now 70 years later, Emanuel's son, Gadi, lives in Israel.  Beasley went on to spend the next 7 years writing that family's story in a book titled Izzy's Fire.  She wrote it to educate children so that they will not fall for the false narrative that God's enemies would have them believe.
So what are the lessons for us today?  We not only see nations like Iran, who openly cry for the destruction of Israel, but the same evil intentions are being spearheaded against Christians, and it is spreading across the globe.  And if we think we will be spared Satan's plan to rid the world of those who belong to Jesus, then that's all the more reason that we should listen to these survivors.
Evil will come as rapidly against us as it swept through Europe 70 years ago.  It will harden the hearts of your neighbors.  You will not recognize your family members or friends; they will suddenly become enemies if you do not step in line.  The stories you have read today are those of people who never dreamed that their lives would take that turn.  We must not refuse to listen to them or to learn from them.  Pray for strength to endure what is coming upon the earth, and pray that you will overcome evil with the testimony of Jesus Christ.  The Evil that overtook the world 70 years ago was not wiped out.  It just went into hibernation and is now awakening from its slumber.  We will soon feel it sweep the earth, and this time it is determined to win!