It's Only The Beginning

All the uproar over Indiana and their Religious Freedom Bill shows us that the agenda to force religious Americans to accept same-sex marriage is far from over.  I am confused by the claims of those who oppose the Bill that it would "discriminate" against those who live the gay lifestyle.  Of course, there are any number of non-religious companies who would gladly service same-sex marriage ceremonies.  Why do they insist that the religious owners go against their faith?
How can one claim discrimination against gays, when the very definition of the word means "recognition and understanding of the difference between one thing and another".  Where is the recognition and understanding for the differences of the religious businesses?
The backlash against Governor Mike Pence threatens to weaken the Bill in order to make it more "palatable" for those who disapprove of it.  But if we think that the discrimination claim will be limited to only businesses, we are naive.  We can expect further harassment and persecution. 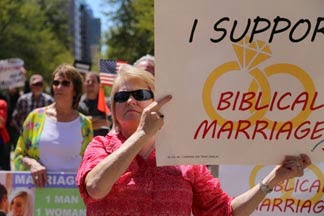 Think about it.  If business owners are forced to go against their religious beliefs, who is next?  What about churches?  I mean, discrimination is discrimination, right?  Why not file suit against churches and pastors who refuse to perform same-sex marriage ceremonies?  Currently, an argument can be made that churches are in a special class of their own; religious organizations protected by the Constitution and their tax-exempt status.
But what if that tax-exempt status could be withdrawn on the basis of discrimination against same-sex couples?  Then they become de-facto businesses who are subject to federal and state anti-discrimination laws against gays -- which means they are vulnerable to lawsuits and fines, just like any other business.
But let's not stop there.  Religious universities will certainly be targeted, both as to their non-profit status, and then for fines if they refuse to provide benefits for same-sex spouses, for example.  Can you see how easy it will be to force religious universities to accept the homosexual agenda by blackmailing them through their financial achilles heel?  By accepting non-profit or tax-exempt statuses, both churches and universities have exposed their weak spots to exploitation by anti-faith groups.
The next logical step would be to go after private religious elementary and high schools.  The battle has already been half won in the states who have forced public schools to teach about same-sex marriage in those states who have approved it by law.  What makes us think they will stop at public schools?  Why should private schools be allowed to “discriminate” against same-sex couples by exempting children from learning about them? Why should homeschooled children be given state-credentialed status without being indoctrinated in the decency of homosexual behavior, all in the name of non-discrimination?
By now, you should see the hand-writing on the wall, and the plan should be apparent.  Not until people of faith are forced to accept homosexuality and same-sex marriage as the norm, will the enemies of Biblical faith be satisfied.  Until then, they will continue to attack us through our ability to make a living; through our churches; and through the education of our children.
Right now, companies like Apple are attempting to smear Indiana and cost them billions in commerce.  In fact, Apple CEO Tim Cook tweeted, "There's something very dangerous happening across the country ... Apple is open to everyone.   We are deeply disappointed in Indiana's new law, and calling on Arkansas to veto a similar bill ... Around the world we strive to treat every customer the same -- regardless of where they come from, how they worship, or who they love."  Of course, he neglects to mention that Apple does business with countries such as Uganda, Nigeria, Qatar, and Saudia Arabia, who execute their citizens for being gay.  But such is the hypocrisy of the Godless and those who ignore God's Word.
But make no mistake ... the backlash against Indiana's Religious Freedom Bill is a forecast of what we can expect from those who wish to eradicate faith in our culture.  The question is this:  Will you stand your ground and defend your faith; even if it means losing everything?  You better decide now, because they won't stop until you are forced to make that decision.  That is the goal and the game plan -- get ready!

Thanks to Ben Shapiro at Breitbart.com for his excellent observation on this issue.

James 5:11   "Behold, we consider those blessed who remained steadfast."
Posted by Pam Kohler at 7:00 AM