How Do You Understand World Events? 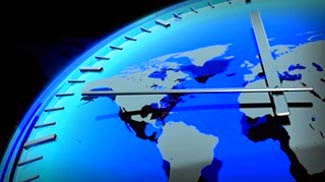 We all feel it.  There are going to be some big events in the near future that affect the lives of every human on earth.  Will they be cataclysmic or just the first in a buildup to the Final Days?  None of us can say for sure.  We all have our eyes on the news items that are in the "spotlight" ... Iran and the nukes; Russia and Ukraine; the bubbling Middle East civil wars; the coming storm that is ISIS.  All are good candidates for being "the one" to start the ball rolling.
But there are other underlying influences that may have escaped our notice; events and circumstances that could well contribute to our demise.  Whether you believe in Biblical prophecy or not, one cannot deny that this world is in decline.  Consider the rapid population growth that has occurred in the last 50 years.  One cannot ignore that our food and water supply has been threatened by this population explosion: from 1.6 billion in 1900, to 7 billion in 2012, to a projected 9.5 billion by 2050.  Shanghai, alone, has a population of 18 million!  I can understand Globalists like Bill Gates concerned about our ability to feed all these people -- I just don't agree with how he would like to control these numbers.
We also cannot ignore the subtle workings of the New World Order through the United Nations, and such confederations of nations as the European Union, the Asian Union, or the North American Union.  It is far too easy for authority to be vested in a single entity, with power to control our lives through global laws, surveillance, data mining through technology, national identity cards, or media manipulation.
And speaking of surveillance, almost everything is controlled electronically now -- from our banking transactions, to our communications.  And we need to be protected from global terrorism, right?  That automatically leads to more surveillance, intrusion in our lives, and increased government control over us.
Our declining morality is so entrenched that we barely recognize the slide; and it's all happened in my lifetime!  How did we get from the Norman Rockwell vision of America to transhumanism, transgenderism, same-sex marriage, rampant pornography, abortion, child sex slaves, human trafficking, entitlement, identity theft, and the lapse of moral attributes in our leaders?
We also cannot ignore the role that the worldwide apostate Church has played.  The Church should be our Fortress in the storm, but instead, it has become a false and political church,  It has forsaken the Truth of the Bible to bow down to the Culture and World Government; abandoning the message of the Gospels to embrace the theology of multiple faiths.  For years, the transformation was subtle and understated -- until the time and the culture was right to attack and splinter the old paradigms.  It is now a confused and impotent standard-bearer for the Great Commission.
There are other signs that this world is coming to a moment of climax and decision.  We cannot dismiss the prominence of Israel in the Middle East, or the rising drums of war in the region; both of which draw our attention to ancient Biblical prophecies.  And the wild weather that has been unprecedented also points to warnings of the Last Days.
These events, taken by themselves, are easy to overlook as just steps in the march of time.  But when considered together, we would be wise to look beyond our limited gaze and discern the possible eternal significance.  We need to see and understand world events as they pertain to God's plan.  They may seem scary in view of our human perception, but, as Believers, we should not fear what they foreshadow.  In the meantime, keep your spirits focused on the throne room of God, and strengthen your faith.  Our Deliverer is close!

John 14:27    "Peace I leave with you; My [own] peace I now give and bequeath to you. Not as the world gives do I give to you. Do not let your hearts be troubled, neither let them be afraid. [Stop allowing yourselves to be agitated and disturbed; and do not permit yourselves to be fearful and intimidated and cowardly and unsettled.]"
Posted by Pam Kohler at 7:00 AM