We Have No Other Option ...

Based on yesterday's blog topic, I found myself wondering how we, as American Christians, will stand in opposition to an Evil agenda within our own nation.  And there followed these thoughts ....

I know we are not to have idols in this world, or lift any man above another.  But there are times when we will look to the example of righteous men, in order to know the path we are to follow.  My friends, that time is now.  Our culture is rapidly disintegrating into immoral chaos.  The opposition to Christianity is growing more hostile, as witnessed by the out-and-out distortion and lies that attempted to drive a small-town pizzeria out of business in Indiana.  (The effort failed, as individual Americans have donated over $800,000 to a fund to benefit the family business).
It started with internet bullies hounding Christian individuals and businesses; accusing them of bigotry and discrimination if they refused to support same-sex marriage.  But, in the wake of the backlash to the Indiana Religious Liberty Law, and in the case of the Indiana pizzeria, remarks grew to include death threats and warnings of retaliatory arson.  How far is this culture, which is beginning to look more and more like Sodom and Gomorrah, willing to go?  Death threats and arson are nothing to sneeze at!
But my real question is this ... how far are Christians and the Church willing to go?  Are we, as individuals, willing to take a stand for clear Christian principles?  Is the Church capable of abandoning its non-political position and becoming active in defending the Bible and God's will -- or is it bowing to the convenience and practicality of siding with the culture, despite the culture's embracing of immoral attitudes and lifestyles?

And whom might we look towards to see how righteous Christians are to respond?  Last week was the 70th anniversary of the execution of a man who acted responsibly in his faith during one of the most evil times in history.  Dietrich Bonhoeffer, a deeply religious Lutheran pastor found himself in a dilemma ... when informed of the evil that was Adolph Hitler, and the plan to exterminate the Jews, how far is "too far" in order to stop that evil?  When confronted with something so offensive to God, is there ever an excuse for Christians to compromise, capitulate, or raise the white flag?
Bonhoeffer didn't think so, and it cost him his life.  At the beginning of the Nazi regime, many members of the [Protestant] churches did not reject National Socialism on principle.  Suffering from the effects of their loss in WWI, many Germans were drawn to the German National People's Party and their idealization of the past.
But a small group of pastors, including Bonhoeffer, became unified in the Confessing Church and  arose in opposition to government-sponsored efforts to nazify the German Protestant church.  They objected to the Nazis on moral and theological principles: they could not reconcile the Nazi state's claim to total control over the person with the ultimate sovereignty that, in Christian orthodoxy, must belong only to God.  It was their stated objective to resist state manipulation of religious affairs.  They tried to stay out of the political fray, and hoped to convince the Church to recognize the contradictions of being a Christian and a Nazi.
But as the evil that was Hitler and his regime grew, pastors could no longer stay on the sidelines.  They had to choose between inaction, which was, in essence, condoning the atrocities towards the Jews; or becoming involved with plots to stop the madness -- even if it meant being part of assassination attempts on the Evil Mastermind, himself.  Many chose the safe route that included tolerance and turning a blind eye.  A few did not; with some being sent to concentration camps, where they survived the war -- or in the case of Dietrich Bonhoeffer, whose fate was to be hanged for his opposition to Hitler and his obedience to his faith. 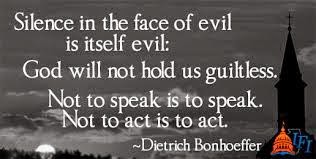 I have not been surprised at the efforts of the anti-religious to tear down the memory of martyrs like Bonhoeffer.  They must not let us see or hear the writings of such a man, who struggled with how to respond within his religious principles (and God's will) to a rapidly deteriorating national culture -- and who was not only unafraid to live for what he believed in, but was not afraid to die for it.
I can only imagine the struggle within his spirit as he confronted the likely consequences of his actions.  One day he would have to stand before God and explain how, as a Christian, he could be complicit in murdering Hitler.  He finally decided that he would have to rely on God's mercy to understand that he had to stop Evil at any cost, even if it meant he lost his soul.  But it wasn't just his own soul he was concerned about.  Writing to his co-conspirators in 1943, he said,  "The ultimate question for a responsible person to ask is not how he is to extricate himself heroically from the affair, but how the coming generation is to live."
Isn't it time we asked ourselves that question?  How are we going to leave this world for the next generation?  Have we already relinquished their ability to live a principled Christian life by compromising and weakening our faith?  In an effort to show our tolerance, have we allowed those who oppose our faith to become more intolerant?  Have we been silent when they should have heard us roar?  Like Bonhoeffer, do we have the courage of our faith and convictions -- or will we stay in the shadows, afraid to call attention to ourselves and to whom we serve?
Those who don't want us to emulate men like Dietrich Bonhoeffer have called his words and actions "small, tentative, restrained, and ambivalent."  But the fact that I am writing to you 70 years after he stood in accordance to what he thought was God's will, points to a man who neither restrained himself from doing what he thought was right, nor faltered or doubted his Christian duty to shine a light on Evil.  May we all exhibit such Christian Courage and resolve to no longer collaborate with the Enemy.  Instead of being silent, let's speak up!  Instead of compromising, let's protest!  It's time to fight the darkness of our times.  We've given up too much ground and we need to hold the line!  We have no other option ...