What If You Had Eight Minutes To Meet Your Maker? 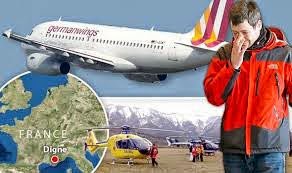 Yesterday, the news of the intentional downing of Germanwings Airbus Flight A320 shocked the world.  I must admit that I was not completely surprised.  Something felt "fishy" from the moment the media announced the crash in the French Alps.  According to the latest reports, Co-pilot Andreas Lubitz "intentionally" sent the plane into its tragic descent.
I've heard news report after news report speaking to "what went on in that cockpit".  We have heard the reports of the captain banging on the cockpit door, demanding to be re-admitted, and the calm demeanor with which the co-pilot carried out his alleged plan.  We want to know why Lubitz did what he did ... was it depression, a suicide wish?  Was terrorism any part of the equation?  Eventually we will have those answers.
For now, all the talking heads, professional pilots, and airline officials are discussing airline procedures in the fatal crash.  How can they reassess their procedures which were instituted in the wake of 9/11?  The airline policy of keeping the bad guys out of the cockpit seems to have backfired as, in this instance, the policy kept the good guys out.  And how can they overcome the obstacle of a co-pilot who manually blocks entrance to the cockpit?  Do they need to rethink the psychological evaluations of pilots?  There will be many man-hours spent on replaying this scenario.
But my immediate thoughts were of the 149 passengers on board.  Rather than contemplating what went on in the cockpit, my emotions lie with what went on in that passenger cabin.  The cockpit voice recorder has already revealed the last minutes of that flight -- the pilot banging on the door and the screams of the passengers as they realized their fate.  So I ask the question I submitted in the title of this post ... What would you do if you had eight minutes to meet your Maker?
I have read the writings of theologians, both past and present, who advise that "It would be well for us to spend a thoughtful hour each day in contemplation of the life of Christ, and what He has done for us."  But what if you only had eight minutes?!?  I cannot imagine the thoughts of those passengers who did not know Him.  Were they consumed with terror over the loss of their life, without any sense of what would happen to them in the seconds after? Were their thoughts only of their own fear, their families, and what it would feel like to die?  Were there any thoughts of their mortal souls or how they would spend eternity?
Of course, eight minutes is ample time to make a decision to accept Jesus as your Savior, and to ask forgiveness for your sinful life.  I can only imagine that God can send the Holy Spirit in a split second, and salvation is yours.  But sadly, how many on that flight gave no thought to their eternal life, or had no inclination to seek the Lord in their last minutes on this earth?
As I contemplate those who belonged to God, I try to put myself in their place.  Eight minutes is a long time to survey your life.  I'd like to think that I could master my fear quickly as I understood the implication of the pilot's actions and the rapid descent.  I hope that I would immediately surrender that fear to the One who is in control of my life; that I would reach out and commune with Him who is my Strength and the One in whom I trust.  I hope that I would have the sense to thank Him for my salvation and ask for His mercy as I prepared to stand before Him in all His glory.  Finally, it is my sincere desire that the Holy Spirit would help me to meet my end on this earth with a heart full of joy and praise for God's presence in my life.
I know that the scenario I presented for myself probably sounds like a fairy tale; too good to be true -- nobody can be expected to have the presence of mind to look beyond their own human terror in those fatal moments, and to fixate upon their Creator.  But I only have to look upon examples in the Bible to know that it is possible.  Stephen did it, as he prayed for God to receive His spirit.  His death was as quick and unexpected as the tragedy in the Alps.  I cannot accept any other explanation but that God will flash the knowledge of Himself and His mercy into our minds at the very moment when it is needed.
I pray for the souls on board that tragic flight, and for their families, who have to live with so many unanswered questions about the last moments of their loved ones' lives.  This tragedy is just one more reason that we should feast upon the Word of God; of His blessed assurances; and of the Joy in the world to come.  How many minutes do you have left?

1 Corinthians 15:54            When the perishable puts on the imperishable, and the mortal puts on immortality, then shall come to pass the saying that is written: "Death is swallowed up in victory."