The Persecution Stories You Haven't Heard

I guess it shouldn't surprise us that the following news stories aren't being blasted across the media.  After all, the persecution of Christians is not actually a top concern among the secular crowd. But, I think it is important that everyone realize the severity of the issue.
The latest religious freedom study from Pew Research shows that Christians and Jews seem to suffer the most in countries around the world.  The problem is getting so bad in the Middle East that a delegation representing Middle East minorities is hoping the United Nations Security Council will soon take action to protect small communities that are undergoing ethnic cleansing by ISIS. 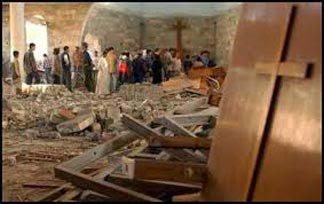 Then there are the stories coming out of Nigeria that are heart-breaking.  Walid Shoebat's website, Shoebat.com, is reporting of the atrocities against Christians in this West African nation.  In case you are unaware of who he is, Walid Shoebat (in his own words) "used to be a radicalized Muslim willing to die for the cause of Jihad until I converted to Christianity in 1994."  He now refers to himself as an experienced former terrorist, who is committed to renouncing radical Islam and reporting atrocities against fellow Christians around the world.
Earlier this week, he carried the stories that Muslims in Nigeria, who are all part of the Fulani tribe, ambushed 82 people in a Christian village as they slept in their beds and slaughtered all of them in a new massacre of Christians that the media is not paying any attention to.  Here is the story as reported by The Christian Post:  Fulani Muslim herdsmen killed at least 82 people and injured several more in an attack on 15 March against a mainly Christian village in Agatu, in Nigeria’s central Benue state. Storming the village at around 4 a.m., herdsmen killed anyone in their path and murdered scores of villagers as they slept in their beds.
“The search for victims and survivors is still ongoing,” said a local resident, “but there is no doubt that the figure may rise because the entire village is like a killing field with the stench of blood everywhere and many still missing”.
The attackers are thought to be from Loko in neighbouring Nasarawa state. After attacking residents and breaking into their homes, the Fulani herdsmen razed the village to the ground, destroying trees, food barns and farmland.
Residents in the village are of the predominantly Christian Egba ethnic group. Ethnic Fulani Muslims frequently attack Christian villages across Nigeria, killing residents and burning churches. Christians in north-eastern Nigeria also suffer attacks from the Islamist insurgency group Boko Haram, which focuses in particular on Christians, Western-style educational institutions and security/political targets.
Shoebat's website also carried a story by Global News that Muslims in Nigeria, all members of Boko Haram, had kidnapped four hundred people, consisting of women and children, executing 50 of them before leaving the village.  Here is the official story:  Militant Islamist group Boko Haram kidnapped more than 400 women and children from the northeastern Nigeria town of Damasak, according to a report in the wake of the town being freed by armed forces from neighbouring Chad and Niger earlier this month.
“They took 506 young women and children. They killed about 50 of them before leaving,” Reuters quoted local trader Souleymane Ali saying. “We don’t know if they killed others after leaving, but they took the rest with them.”
According to Reuters, there has been no official Nigerian government confirmation of how many people may have been kidnapped from the town.
Damasak became a ghost of what it was before Boko Haram held the town of 200,000 people under siege for five months, according to the New York Times.
So, why haven't we heard here in the West of these atrocities?  I guess it's understandable when you consider that most of the media is godless and uninterested in faith issues.  But isn't the genocide of entire groups of people -- regardless of faith or nationality -- newsworthy?
And what about those Christians who are in the national spotlight?  Why aren't they calling more attention to the persecution of our fellow brothers and sisters in Christ?  Are we not called to intercede on their behalf with prayers and petitions to the throne room of our God?  Without honest and up-to-date reporting, we affluent and comfortable Christians in the West will continue to bask in our naiveté and ignorance.  And that's exactly where the Enemy wants to keep us ... unaware, insensitive, and easily defeated.  We remain so at our own risk.