History and Idolatry: Where Will It End?

Officials at the United Nation's are calling it a "war crime" ... the world's archeologists and historians are mourning the loss of world heritage sites.  And it's all because ISIS is set on a path of destruction.  The furor is over the recent demolition of ancient historical sites in the Middle East. 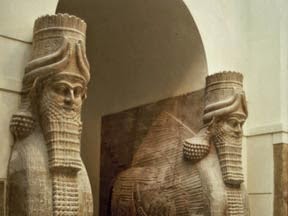 It began last summer when the radical terrorists destroyed the tomb of the prophet Jonah in the ancient city of Nineveh, near Mosul.  It has continued with the latest attacks in the Assyrian city of Nimrud in northern Iraq, destroying the 3,000 year-old winged statues placed at the gates of the Palace of Ashurnasirpal.  (If you know your Biblical history, this city was named for Nimrod, the king who rebelled against God and was responsible for the building of the tower of Babel).
Over this last weekend, ISIS began the destruction of the 2,000-year-old city of Hatra, where a temple to the Shamash sun god still stands more than 1,750 years after the Sassanian empire razed the Mesopotamian city.   ISIS were also seen carrying away ancient artifacts.  And in the last few days, they have set their sites on Khorsabad, the ancient capital of Assyria built by King Sargon II shortly after he came to power in 721 B.C., and abandoned after his death in 705 B.C.  It features a 24-meter thick wall with a stone foundation and seven gates.  Shortly after the unexpected death of Sargon in battle, the capital was shifted a short distance south to Nineveh.  The sculptured stone slabs that once lined the palace walls are now displayed in museums in Baghdad, Paris, London and Chicago. 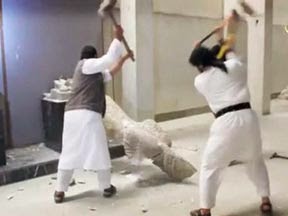 So what is the significance of these ancient cities to the religious fighters, ISIS?  The official reasoning for all the destruction of these ancient sites is the militant group's plan to rid its territory of symbols they say promote idolatry.  In early 2015, they announced their intention to destroy many ancient artifacts, because they are graven images or are otherwise un-islamic, and they have destroyed thousands of books and manuscripts in Mosul's libraries.
In February 2015, ISIL destroyed Akkadian monuments in the Mosul Museum, and then came the attack on Nimrud, as they bulldozed its archeological site on the basis that they were blasphemous -- which one attacker filmed declaring, "These ruins that are behind me, they are idols and statues that people in the past used to worship instead of Allah. The Prophet Muhammed took down idols with his bare hands when he went into Mecca. We were ordered by our prophet to take down idols and destroy them, and the companions of the prophet did this after this time, when they conquered countries.”
The first thing that comes to mind is the similar contempt that Christianity has for idolatry.  YHWH commanded the Israelites to worship only Him, and when they failed (as they did so many times when they turned to idol worship), it was God's wrath that was poured out on men and nations. And this where I see the difference.  Throughout the history of Christianity, it was God who destroyed the idols.  Here are just a few examples:
Ezekiel 30:13:  This is what the Sovereign LORD says: "'I will destroy the idols and put an end to the images in Memphis. No longer will there be a prince in Egypt, and I will spread fear throughout the land.
Micah 5:13:  [And in that day, says the Lord]:  I will destroy your idols and your sacred stones from among you; you will no longer bow down to the work of your hands.
Zephaniah 2:11: The Lord will be awesome to them, for He will reduce to nothing all the gods of the earth;
What one must recognize is that man builds the idols, but it is the power of God who destroys them.  Just as when the prophet Elijah defeats the prophets of Baal, it is the power of God that gives him the victory.  What I am seeing in Iraq, is ISIS determined to promote a fiercely purist interpretation of Sunni Islam, in defiance of Iraq's majority Shi'ite Muslims.  Is it really about honoring their god, or is it about rejecting the religious shrines of their sectarian rival, and the holy sites shared by Christians and Jews in the area? It appears as if they want to wipe any trace of other religious influences from Iraq in their goal of establishing the Islamic Caliphate.  What better way than to destroy ancient artifacts that bear witness to the diversity of faiths throughout history?
But here's my question ... if they are trying to establish a fundamentalist identity and erase the historical proof of other religions, what is to stop them from distributing their destruction to other "shrines" in Israel, Europe, and the West?  Haven't they declared that the Caliphate will dominate the world?  Will they be the ones to try and institute a One World Religion?  It's obvious that is what they desire.
I also find it ironic that our Bible predicts the destruction of Babylon and her idolatrous ways at the end of days.  The connections between radical Islam; the destruction of ancient idols and shrines in Nineveh, Nimrud, Hatra, and Khoursabad; and the mention of Babylon, which was begun by Nimrod cannot be denied.  Is this just the beginning of God's judgment upon the earth for the centuries of idolatrous worship of foreign gods?  Will ISIS clear the way for the Anti-Christ to reveal himself, by using their religion to establish himself --- and then when they have served their usefulness, he destroys them, and declares himself God?
I don't know what it all means, but it sure seems as if it's all connected.  History is being destroyed before our very eyes, and I have to wonder, when and where will it end?  I feel God's hand in it, and the only thing I know for sure is, that whatever happens, He will be glorified.  All the shrines and false idols and false religions will not hinder Him!

Isaiah 45:20   "Assemble yourselves and come; draw near together, you survivors of the nations! They have no knowledge who carry about their wooden idols, and keep on praying to a god that cannot save."