The Devil Is Loose In The World!

I don't care if you are a Bible-believing Christian or not, how could anyone look at what is going on in the world and not recognize the influence of our greatest Enemy?  I'm not talking about your run-of-the-mill negative news stories about corruption, immorality, or greed.  That is the natural state of man's self-centeredness and sinful nature.  And don't get me wrong; I'm not trying to condone compromise in those areas.  No, I'm talking about the in-your-face examples that Satan and his demons are working overtime as they realize their time is short. 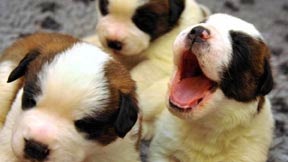 Just consider these headlines -- all in one day -- on one news site!  The first is a story of two Alabama teenagers who face cruelty charges after they were accused of beheading three puppies with a machete and posting video on social media.  Does that sound like the actions of your average "rebellious" teens?  Who does such a cruel act and then gloats by making sure as many people as possible can witness such a barbaric act?  The Bible is full of sacrifices to demonic gods and false idols, and movies like Ouija, often tempt immature minds to seek the occult.  I have no idea what influenced these teens, but it is not of this world.
The next article featured students in New York who engaged in a racially-charged brawl, using baseball bats and brass knuckles to attack each other, following a lunchroom dispute the day before.  Apparently, the school had contacted parents about the lunchroom altercation, warning them that it might escalate into violence outside of the school's jurisdiction.  Sure enough, the next day the violence erupted; students were injured, and expulsions resulted.  What happened to the ability of school's to be pro-active, rather than reactive?  Is it just accepted these days that racial tension is the norm, and violence cannot be prohibited?  Of course, the attitudes and preconceptions of our kids are modeled after what they see from leadership in their homes, communities, and the nation.  And, oh, how Satan loves to influence leadership and take advantage of personal character flaws.
Perhaps one of the most hideous and confusing news stories was that of a neighborhood grandmother in Chicago -- a woman described as polite, compassionate, and generous -- who stuffed a sock into the mouth of her 7-month-old granddaughter, before striking her on the head several times, and cutting her throat with a power saw.  This is blatant demonic possession and influence!  What kind of sane person does this?  This is not the normal activity of a human being!  Only a person who hears the voice of Satan could ever commit such heinous deeds.  We may never know what set this woman on this path towards death, but I can guarantee you that it originated in the spiritual realm.
But the news site wasn't limited only to stories within our own country.  And increasingly, around the world, we are seeing demonic activity centered around the abuse of children.  In Cairo, Egypt, a 12-year-old student was beaten to death, suffering head injuries and a brain hemorrhage, because he failed to do his homework!  Throughout the world, children are subjected to the sex slave trade; girls are kidnapped and forced into marriage by Islamic religious fanatics; and young boys are twisted into becoming ruthless killers and hate-filled ideologues, participating in brutal murders -- such as the story of the baby-faced executioner who looks to be no older than 12, and appears to kill an Israeli Arab who confesses to being a Mossad spy in the latest stomach-turning video released by ISIS.
Like I said at the beginning of this essay, all of these stories appeared in one day on the same news site.  I cannot stress enough that we, as people -- and especially as Christians! -- need to be aware of the spiritually demonic influences that abound in the world today.  Satan knows his time is short; the Lord will not put up with such sin and unrighteousness and evil for much longer.  So spiritual warfare is in full swing, and the evidence is everywhere.  We can see it in the emotional and physical manifestations of the devil's hatred for God and mankind; we see it in the bitterness, the growing occultic activity, the absolutely inhuman actions of cruelty, and the general immorality and rebellion of civilized people. 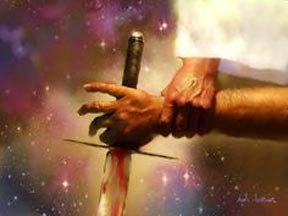 BUT, here's the caveat!  Don't let the overwhelming evidence of Satan's presence in the world dishearten you!  Nothing happens in this realm that God does not control.  Satan, being the narcissistic, self-glorifying entity that he is, thinks he is making great strides in accomplishing his purposes.  What he doesn't know is that God will use every one of his evil deeds for His own good purposes.  Just think about it ... the devil thought he had scored a victory by instituting Judas's betrayal, which led to the death of our Savior.  But God used that event to showcase His Supremacy and Sovereignty in the most spectacular and miraculous restoration of our Lord!
It is our duty as followers of the risen Lord to be aware that the battle goes on -- that Satan will not give up trying to win the world until Jesus defeats him once and for all.  So be mindful of the schemes and strategies of your Enemy; of his program to overwhelm you with his spiritual power.  It is real and it exists!  While we have the weapons to recognize it and fight it, we must be aware and prepared to face it!

Psalm 44:5    "Through You we will push down our enemies; through Your name we will trample those who rise up against us. For I will not trust in my bow, nor shall my sword save me. But You have saved us from our enemies, and have put to shame those who hated us. In God we boast all day long, and praise Your name forever."