Tomorrow will likely be an historic day in the relationship between the United States and its only democratic ally in the Middle East, Israel.  Prime Minister Benjamin Netanyahu is scheduled to speak before Congress tomorrow.  It will be historical in light of the obvious rebuff by the White House and the contentious dialogue between the two leaders of state.
This speech takes place at a time in the reborn nation of Israel's short history when all of its surrounding neighbors have declared their intention to "drive the Jews into the sea", and when even its Western allies seem to have abandoned them in their hour of strategic need.  The United States appears to be courting a "soft" negotiation with Israel's staunch enemy, Iran, over its development of nuclear weapons; a move that surely endangers Israel's security.
But there is a deeper and far-reaching reason that this visit is historical.  Prime Minister Netanyahu's visit occurs one day before Purim, the Jewish holiday that commemorates the salvation of the Jewish people in ancient Persia from Haman’s plot “to destroy, kill and annihilate all the Jews, young and old, infants and women, in a single day.” (Esther 3:13).  In case you don't make the connection ... modern-day Iran is ancient Persia; and should Iran gain nuclear weapons they could certainly accomplish Haman's ancient plan in a single day. 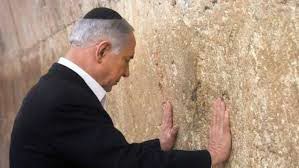 That is why, before his historic visit, Prime Minister Netanyahu paid a visit to the Western Wall.  I think it is important for all Americans to understand the significance of this holiest site in Judaism.  That's why I went to Aish.com, a leading Jewish website, to be able to explain to you why the Prime Minister of Israel went there.  Here is what you need to know:
The Western Wall is a surviving remnant of the Temple Mount in Jerusalem, which was destroyed by the Romans in 70 AD. The Temple was the center of the spiritual world, the main conduit for the flow of Godliness. When the Temple stood, the world was filled with awe of God and appreciation for the genius of the Torah (which is specifically, the first five books of Moses; Genesis - Deuteronomy -- and sometimes, in general terms the Torah is considered the entire Old Testament).
Although other parts of the Temple Mount retaining wall remain standing, the Western Wall is especially dear, as it is the spot closest to the Holy of Holies, the central focus of the Temple, and where God's presence dwelt.  The Temple Mount is also where Isaac was bound for sacrifice.  And it is here that his son Jacob dreamed of the ladder ascending to heaven.  As you can see, this site has great historic significance, as well as religious magnitude for both the Jewish and Christian faiths.
In ancient Israel, men from across the vast breadth of the Land God had given them were commanded to travel to Jerusalem to worship at God's Temple.  Each time the Temple was destroyed throughout the centuries, and through all their captivities and exiles, Jewish prayers from around the world have been directed toward the Temple Mount.  The Western Wall also became known as "The Wailing Wall" because of the centuries of endless tears, shed by Jews yearning to rebuild Jerusalem.
Finally, in establishing the eternal covenant with Abraham, God promised that the Jewish people will never be destroyed (Genesis 17:7). In this way, the Wall is a symbol of the Jewish people: Just as there have been many efforts to destroy the Wall and yet it remains eternal, so too the Jewish people have outlived their enemies and remain eternal.  Now, can you see why Netanyahu might want to visit this important site before coming to state his nation's purpose before Congress?
With Iran as a nuclear threat, it is no mere photo op that finds Mr. Netanyahu at the Western Wall. The Wall has been the focal point of those who have fought for Israel in the past -- during the Bar Kochba revolt, Israel's heroes fought like lions for every stone of the Temple. When the Maccabees defeated the Syrian-Greeks, the first thing they did was to purify the Temple and light the holy Menorah.  In the 1948 Arab-Israeli war, when the ceasefire lines were drawn, Jerusalem was divided and Jews were once again banished from the Western Wall, permitted only to gaze across the barbed wire from afar.  In the 1967 Six Day War, Israeli paratroopers entered the Old City through the Lion's Gate. "Har Habayit b'Yadeinu!" – came the triumphant cry – "The Temple Mount is in our hands!" Amidst shofar blasts, grown men wept and danced at the Western Wall.  After 2,000 years, Jerusalem was finally united under Jewish control, with free access for all.  The Western Wall defines the tenacity of the Jewish people to survive against all odds, and it is fitting that Israel's national leader would visit it before appealing to its Western ally to reconsider any concessions they might make to Israel's ancient enemy.
It is also fitting that at this time in Israel's history, their leader's name is Netanyahu, which is the Hebrew form of the name Nethaniah, which means "YAHWEH has given".  It is also fitting that after his speech to Congress and a meeting with bipartisan leaders, Mr. Netanyahu will fly back to Israel in time to begin the Purim observance and the celebration of his nation's salvation from the ancient Persians.  Just as the ancient Israeli Prime Minister, Mordechai, stopped the anti-semitic actions of the evil Haman, this modern Prime Minister is standing up for the right of the Jews to defend themselves against their enemies.  May God bless his mission tomorrow!

Esther 10:3    "For Mordecai the Jew was next to King Ahasuerus [as Prime Minister] and great among the Jews, and was a favorite with the multitude of his brethren, for he sought the welfare of his people and spoke peace to his whole race."