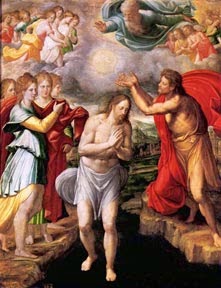 18 For Christ [the Messiah Himself] died for sins once for all, the Righteous for the unrighteous (the Just for the unjust, the Innocent for the guilty), that He might bring us to God. In His human body He was put to death, but He was made alive in the spirit,
19 In which He went and preached to the spirits in prison,
20 [The souls of those] who long before in the days of Noah had been disobedient, when God’s patience waited during the building of the ark in which a few [people], actually eight in number, were saved through water.
21 And baptism, which is a figure [of their deliverance], does now also save you [from inward questionings and fears], not by the removing of outward body filth [bathing], but by [providing you with] the answer of a good and clear conscience (inward cleanness and peace) before God [because you are demonstrating what you believe to be yours] through the resurrection of Jesus Christ.
22 [And He] has now entered into heaven and is at the right hand of God, with [all] angels and authorities and powers made subservient to Him.