"I Will Not Back Down"

Yesterday, I talked about the very real danger of this nation losing its identity as independent free-thinkers and upholders of our inherited freedoms.  But I'd like to tell you two stories of individuals that have decided to stand up for our fading values. 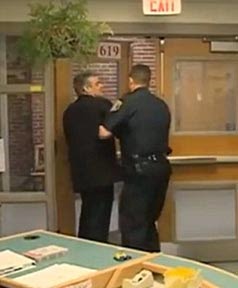 You might recall an essay I wrote last summer that involved William Baer, who appeared at a meeting of his local School Board to protest a book that had been assigned to his 14-year-old daughter.  Mr. Baer stood up to say that he felt the sexual content of the book was inappropriate, and he wanted to voice his objection.  However, the members of the school board didn't want to hear it, and asked him to sit down.  Apparently he wasn't being "respectful" of other audience members.
Understandably, this offended the conscientious parent and he said he didn't appreciate the school being disrespectful to his daughter by requiring a book (that he clearly felt was immoral) to be read.  He was then told that he had violated the 2-minute rule for speaking and was escorted out of the room and arrested.
As World Net Daily reports, his "unlawful arrest" and the criminal charges that were filed against him were eventually thrown out of court, but Mr. Baer has decided that "it’s time for elected leaders to stop trampling the First Amendment rights of citizens," and he is fighting back with a lawsuit against the officer who made the arrest, then-acting Police Chief James Leach.  For the past seven months, Leach, along with the subsequently appointed Police Chief, continued to prosecute the case against Mr. Baer, until County Judge James Carroll tossed the case out of court.
Baer said his lawsuit is as much about stopping the national trend as it is seeking justice for himself.  “These men abused their authority and their positions under color of law. The ‘law enforcers’ became lawbreakers and must be held to account.”
Mr. Baer is among a growing number of law-abiding citizens who have been arrested for speaking up for their principles.  Parents who disapprove of the Common Core educational system are being harassed at public meetings, and in one such case, in Baltimore County, Maryland, a parent was approached by a burly security guard, pushed, shoved, threatened and eventually handcuffed and forced to leave the meeting.
It is just such treatment that is behind Mr. Baer's lawsuit.  Baer maintains that the three charges of disorderly conduct brought against him were unwarranted and he wants justice for himself and his family.  “After seven-and-a-half months of being pursued by the State of New Hampshire, through the Gilford Police Department and School Board, I am obviously pleased that all charges have been dismissed. Belknap County Judge James Carroll showed me there still is some justice in our system,” he said.  But he makes it clear that this is not about vindictiveness ... it's about standing up for our First Amendment rights.
I also want to tell you about the story of a 70-year-old Christian florist in Washington state who is being sued for refusing to provide floral arrangements for a same-sex wedding.  Although she offered to help the couple find a florist who would service them, that wasn't good enough.  The inevitable lawsuit was filed and Barronelle Stutzman was found guilty of violating Washington's nondiscriminatory statute. 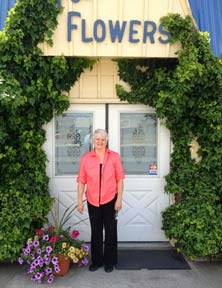 But here's what is so disturbing to me about this story ... According to The Christian Post, the man filing the lawsuit has been a customer of Stutzman's for the past nine years!  She had built great rapport with the customer and an obviously satisfactory business relationship.  But when she honestly confided that due to her faith, she felt she had to decline his request for his wedding, any friendship went out the window.  The "guilty" sentence and summary judgment could involve Stutzman losing not only her business, but her home and savings.
The state's Attorney General offered Barronelle a way out of the overwhelming judgment ... simply pay $2001 in fines and legal costs -- and agree to service gay weddings in the future -- and it would all go away.  But Ms. Stutzman is no "luke-warm" Christian.  In response to the Attorney General's letter, she replied with a letter of her own:  "Washington's constitution guarantees us 'freedom of conscience in all matters of religious sentiment.' I cannot sell that precious freedom," Stutzman's letter asserts. "You are asking me to walk in the way of a well-known betrayer, one who sold something of infinite worth for 30 pieces of silver. That is something I will not do."
She also managed to school the AG on exactly what the word "freedom" means.  "Your offer reveals that you don't really understand me or what this conflict is all about. It's about freedom, not money," Stutzman wrote. "I certainly don't relish the idea of losing my business, my home, and everything else that your lawsuit threatens to take from my family, but my freedom to honor God in doing what I do best is more important."
This florist certainly has the courage to stand behind her faith and convictions.  "I pray that you reconsider your position. I kindly served Rob for nearly a decade and would gladly continue to do so. I truly want the best for my friend," Stutzman's letter stated. "I've also employed and served many members of the LGBT community, and will continue to do so regardless of what happens with this case. You chose to attack my faith and pursue this not simply as a matter of law, but to threaten my very means of working, eating and having a home."
Not only is she clear about how she wants to be understood, but she speaks for me and, I believe, many more Christians across this nation when she says, "Our state would be a better place if we respected each other's differences, and our leaders protected the freedom to have those differences," Stutzman wrote. "Since 2012, same-sex couples all over the state have been free to act on their beliefs about marriage, but because I follow the Bible's teaching that marriage is the union of one man and one woman, I am no longer free to act on my beliefs."  Well said!
In the stories of these two people, we have excellent examples of standing for our principles and values, as well as our religious beliefs.  It would be simple for each to accept the olive branch that has been offered after the miscarriage of justice against them.  For each, it is not about profiting from injustice, but about fighting back against a system that is one-sided and tyrannical.  It is about standing up for their God-given and Constitutional rights.  It's really that simple ... and that necessary.

Proverbs 25:26   "Like a muddied spring or a polluted fountain is a righteous man who gives way before the wicked."