The Indoctrination Of Our Children 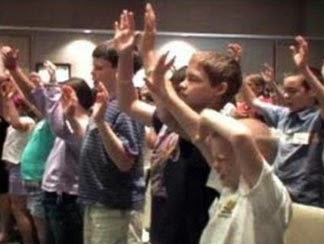 I'd like to know what comes to your mind when you read this radical statement ... You can't make socialists out of individualists.  Children who know how to think for themselves spoil the harmony of the collective society which is coming, where everyone is interdependent."  How about Constraint? Regulation? Dominance?

It might surprise you to know that this statement was made by John Dewey, a well-known American philosopher, psychologist and educational reformer.  From his statement, it doesn't take a genius to figure out that he was progressive, a socialist, and often credited with fathering the 20th century rift between religion and science.  Furthermore, it probably wouldn't surprise you to find out that he was an atheist and a secular humanist, which means he gave no credence to faith as the basis for morality and decision-making.
Which brings us back to his corrupting influence on this nation's educational system of the last 100 years.  He made the disparaging statement (which I cited above) in 1896, when he signed on to the Humanist Manifesto, a document that elaborated on a philosophy and value system which does not necessarily include belief in any personal deity or "higher power".  Combine this anti-God ideology with socialism and you can easily see why free-thinking and self-reliance could never be tolerated in our society.  And more importantly, you can see how far down that road we've come.
I have said all this to bring us up to speed in regards to our current situation.  John Dewey's philosophy has been the impetus for our rulers for the last century; while discreet at the beginning, they were successful in stealthily leading us down this path towards collectivism, entitlement and shared community.  But there's a funny thing about Americans.  At the core of their makeup is the unique DNA that just cannot be filtered out.  That's why we see our current state of affairs ... executive orders and blatant violations of the Constitution are becoming commonplace because the remnant of the "historic America" is awakening to the plans to control us, regulate us, and steal our freedoms.
We are wise to the out-of-control spending, the over-stepping of authority, and our declining stature in the world.  You can sense the near panic and anxiety that time is running out to completely transform America.  The last great gasp of hope before it all caves in is to gain the hearts and minds of our kids.  If they can indoctrinate them, us older individualists will be dying off, and there will be no one to recall the true meaning of freedom.
So, how do they accomplish that?  First of all, by implementing programs that show the kids that the government is responsible for caring for them.  Remember when you used to bring your sack lunch to school and every kid had something different to trade?  You could always get a Hostess cupcake in exchange for a bag of Cheetos.  Now, the government prohibits bringing your own brown bag lunch and standardizes the amount of sugar and fat allowed.  In the guise of "healthy lunches", the kids are actually receiving smaller portions of highly processed foods.  But that's not the point ... the real issue is that our kids are getting used to being told what to eat, and discouraged from making their own decisions.
Secondly, can you remember when your teacher was due respect at school, but your mom and dad were the ultimate authority in your life?  Now, our kids are being told that their teacher is the authority figure in their lives, and their parents aren't really qualified to teach them about the important things .... like sex education, religion and faith, global warming, gun control, free speech.  You name it -- if different opinions from the "accepted government" positions are expressed, students are discouraged and often penalized for voicing them.
Your child is being told that opposing opinions are not only invalid, but dangerous to the harmony of the collective.  Anyone hearing such opinions is encouraged to report it to their teacher.  Are your parents, grandparents, or neighbors storing extra food?  Have a concealed handgun license?  Oppose same-sex marriage?  Make "disparaging remarks" against anyone of another race or religion?  Think how easy it is to manipulate kids into talking about what is said at home ... a lecture on love and respecting each other can quickly become a re-education session on why there is no difference between Tommy's two mothers and little Janie's mom and dad.  They are never schooled in the fact that the conception process for Tommy and Janie are profoundly dissimilar -- one is a natural function of our bodies; the other is scientifically generated.
And by casting aspersions on parental authority and opinions, it is not hard to conceive that our children are becoming defacto followers of the state; like sheep being led to the slaughter.  Just think about it ... one more generation and the brainwashing could be complete.
The question now becomes, "are there enough of us to stall this covert takeover of our kids and our nation?"  Are there any willing to do the hard, dirty work to stand up and voice their God-given right to be individualists, independent, self-sufficient , and able to self-determine their lives?  Tomorrow, I will share the stories of two such people who are refusing to bow to the pressure.  These are the real role models for our youth!

1 Timothy 6:20-21   "... guard the deposit entrusted to you. Avoid the irreverent babble and contradictions of what is falsely called “knowledge,” for by professing it some have swerved from the faith."
Posted by Pam Kohler at 7:00 AM

Email ThisBlogThis!Share to TwitterShare to FacebookShare to Pinterest
Labels: Liberty and Freedom, Our Youth